Empire on the Hudson 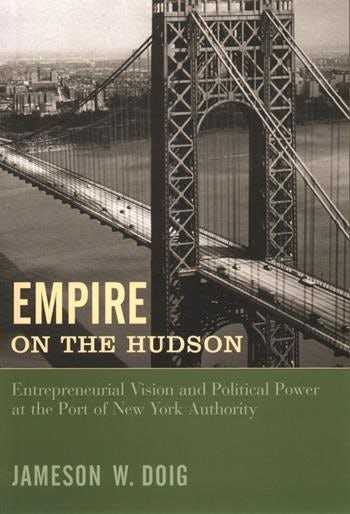 Empire on the Hudson

Revered and reviled in almost equal amounts since its inception, the Port Authority of New York and New Jersey has been responsible for creating and maintaining much of New York and New Jersey's transportation infrastructure—the things that make the region work. Doig traces the evolution of the Port Authority from the battles leading to its creation in 1921 through its conflicts with the railroads and its expansion to build bridges and tunnels for motor vehicles. Chronicling the adroit maneuvers that led the Port Authority to take control of the region's airports and seaport operations, build the largest bus terminal in the nation, and construct the World Trade Center, Doig reveals the rise to power of one of the world's largest specialized regional governments.

This definitive history of the Port Authority underscores the role of several key players—Austin Tobin, the obscure lawyer who became Executive Director and a true "power broker" in the bi-state region, Julius Henry Cohen, general counsel of the Port Authority for its first twenty years, and Othmar H. Ammann, the Swiss engineer responsible for the George Washington Bridge, the Bayonne and Goethels bridges, the Outerbridge Crossing, and the Lincoln Tunnel.

Today, with public works projects stalled by community opposition in almost every village and city, the story of how the Port Authority managed to create an empire on the Hudson offers lessons for citizens and politicians everywhere.

Doig's precision and thoroughness are valuable. His passion for the role of public building in urban life... is evident.... He writes with a detachment that gives him an authority over the subject matter. New York Review of Books

This stirring, keenly-written history is filled with insiders'details and jousts with mayors, governors, and even a president. Political Science Quarterly

A fascinating organizational biography...For its behind-the-scenes views of two of the New York area's vital public structures, the George Washington Bridge and the Port Authority Bus Terminal, the book deserves a permanent place in every construction and engineering library. Engineering News Record

Foreword
List of Illustrations
Elected and Appointed Officials: Years in Office
Preface: Hopes and Judgments
1. A Wilsonian Hybrid: The Powers of Government and the Spirit of Capitalism
PART 1. Creating a New Institution
2. The Tensions and Opportunities of Federalism: Commercial Conflict in the New York Region
3. Designing a New Organization: An Uneasy Marriage of Planning and Politics
PART 2. Failure and a New Beginning
4. Modernizing the Rail System: Competing Strategies for an Expanding Metropolis
5. Negotiating with the Railroads: Regional Planning Confronts the Wary Capitalist
6. Politics and Engineering Passion: Expanding the Port Authority's Dreams
7. A Web of Bridges, Tunnels, and Political Intrigue
PART 3. Drift and teh Sources of Renewal
8. Near Bankruptcy and the Loss of Vision
9. Federalism as a Lawyers' Playground
10. The Threat to Municipal Bonds as Danger and Opportunity
PART 4. Expanding Empire
11. To Claim the Skies and Seas
12. Breaking an Airline Monopoly
13. "A Humdrum Job of Engineering" and More: Creating a Giant Bus Terminal in Manhattan
PART 5. Conclusions
14. A Regional Empire in American Politics: Local History and its Impact, Leadership Strategies, and Ethical Dilemmas
Epilogue: Triumps and Travails of an Aging Empire
Acknowledgements
Appendix: The Port Compact of 1921
Index

Jameson W. Doig is professor of politics and public affairs in the Politics Department and Woodrow Wilson School, Princeton University. His previous books include New York: The Politics of Urban Regional Development (with Michael N. Danielson) and Leadership and Innovation: A Biographical Perspective on Entrepreneurs in Government (with Erwin C. Hargrove).