Oil and Political Survival in the Persian Gulf 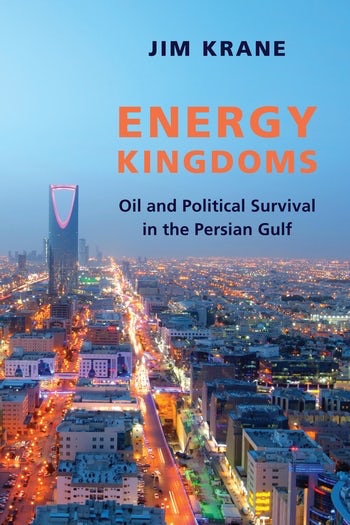 Oil and Political Survival in the Persian Gulf

After the discovery of oil in the 1930s, the Gulf monarchies—Saudi Arabia, Kuwait, Qatar, the United Arab Emirates, Oman, and Bahrain—went from being among the world’s poorest and most isolated places to some of its most ostentatiously wealthy. To maintain support, the ruling sheikhs provide their subjects with boundless cheap energy, unwittingly leading to some of the highest consumption rates on earth. Today, as summertime temperatures set new records, the Gulf’s rulers find themselves caught in a dilemma: can they curb their profligacy without jeopardizing the survival of some of the world’s last absolute monarchies?

In Energy Kingdoms, Jim Krane takes readers inside these monarchies to consider their conundrum. He traces the history of the Gulf states’ energy use and policies, looking in particular at how energy subsidies have distorted demand. Oil exports are the lifeblood of their political-economic systems—and the basis of their strategic importance—but domestic consumption has begun eating into exports while climate change threatens to render their desert region uninhabitable. At risk are the sheikhdoms’ way of life, their relations with their Western protectors, and their political stability in a chaotic region. Backed by rich fieldwork and deep knowledge of the region, Krane expertly lays out the hard choices that Gulf leaders face to keep their states viable.

Bravo to Jim Krane for his thoughtful and well-researched book that explains the important roles oil has played in the domestic economies and internal politics of the Persian Gulf states, and the hard choices they will have to make as they try to wean their citizens from a troubling reliance on it. James A. Baker, sixty-first U.S. secretary of state under President George H.W. Bush

Jim Krane’s compelling narrative provides a ringside view of the economic and social transformation underway in the Gulf region. His realism leaves you in no doubt as to the scale of the challenge and the new politics rising to meet it. David Hobbs, head of research, King Abdullah Petroleum Studies and Research Center, Riyadh

Is it possible that oil exports from Gulf countries could be seriously threatened by skyrocketing demand in domestic consumption? In his scintillating book, Jim Krane offers a probing analysis of how these oil-rich nations are grappling with the lavish energy subsidies that are intrinsic to their political stability and modern state building. Sophia Kalantzakos, New York University/NYU Abu Dhabi

Jim Krane is a marvelous storyteller, and his book provides one of the best views of the world of oil as lived by everyday Arab Persian Gulf citizens, not just policy wonks. In the process, he gores a few sacred cows of academia, like the rentier state theory or the condescending dismissal of local Gulf achievements. The book is a must for all who have an interest in the impact energy has on the societies of the Gulf—and, by extension, on ours. Jean-François Seznec, senior fellow at the Global Energy Center, the Atlantic Council

Perhaps never before has the energy industry played such a pivotal role in the world’s economic, geopolitical, and environmental future. At the heart of it all is the Persian Gulf region. Energy Kingdoms is a timely take on the challenges and complexities faced by the leaders of the Persian Gulf kingdoms, as well as the knock-on effects for the rest of the world. It is a meaningful contribution to our understanding of and response to those challenges. Bobby Tudor, chairman, Tudor, Pickering, Holt & Co.

Krane tackles a central question for the Gulf monarchies: can rulers reduce subsidies, amending the ‘rentier’ social contract, without losing popular support? While prevailing wisdom has long assumed the answer is “no,” Krane makes a convincing case that such adaptation is not just necessary but also possible. Deftly combining journalistic flair with scholarly rigor, Energy Kingdoms is essential reading for anyone interested in the political and economic future of the Gulf states. Gerd Nonneman, Georgetown University–Qatar

A fascinating look at the double-edged sword that is the Gulf monarchies' greatest resource. Science

A concise history of the region’s oil and gas boom and its consequences with an illuminating critique of the two main political science theories that have attempted to explain what oil riches mean for the region’s politics. Justin Fox, Bloomberg Opinion

Energy Kingdoms should be an essential read for anybody concerned about the future of the Gulf. Arab News

Ultimately, the clarity of the book's central arguments and its well-researched economic analysis make it unmissable for anyone interested in the Gulf's political and economic future. Petroleum Economist

Energy Kingdoms is obviously relevant for any researcher interested in energy policy in the GCC, but it also delivers insights for those interested in related energy policy contexts beyond the region. Krane weaves the history, characters, culture, geopolitics, and domestic politics into a rich and insightful story about how these states evolved and the quandaries they now face. Energy Journal

Acknowledgments
Introduction
1. Before Oil
2. The Oil Age Arrives
3. The Big Payback
4. From Energy Poverty to Energy Extremism
5. Unnaturally Cool
6. We Have a Serious Problem
7. Iran and Dubai Lead the Way
8. Shifting Gears in Saudi Arabia
9. The Politics of Reform
Conclusion: The Climate Hedge
Notes
Index

Jim Krane is the Wallace S. Wilson Fellow for Energy Studies at Rice University’s Baker Institute for Public Policy. He holds a Ph.D. from Cambridge University and is the author of City of Gold: Dubai and the Dream of Capitalism (2009). A former journalist, he was a correspondent for the Associated Press and has written for publications including the Washington Post, the Wall Street Journal, and Financial Times.