Enlightenment on the Eve of Revolution

The Egyptian and Syrian Debates 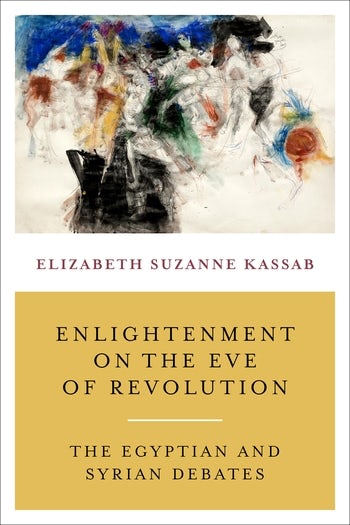 Enlightenment on the Eve of Revolution

The Egyptian and Syrian Debates

During the two decades that preceded the 2011 revolutions in Egypt and Syria, animated debates took place in Cairo and Damascus on political and social goals for the future. Egyptian and Syrian intellectuals argued over the meaning of tanwir, Arabic for “enlightenment,” and its significance for contemporary politics. They took up questions of human dignity, liberty, reason, tolerance, civil society, democracy, and violence. In Enlightenment on the Eve of Revolution, Elizabeth Suzanne Kassab offers a groundbreaking analysis of the tanwir debates and their import for the 2011 uprisings.

Kassab locates these debates in their local context as well as in broader contemporary political and intellectual Arab history. She argues that the enlightenment they advocated was a form of political humanism that demanded the right of free and public use of reason. By calling for the restoration of human dignity and seeking a moral compass in the wake of the destruction wrought by brutal regimes, they understood tanwir as a humanist ideal. Kassab connects their debates to the Arab uprisings, arguing that their demands bear a striking resemblance to what was voiced on the streets of Egypt and Syria in 2011. Enlightenment on the Eve of Revolution is the first book to document these debates for the Anglophone audience and to analyze their importance for contemporary Egyptian and Syrian intellectual life and politics.

In Enlightenment on the Eve of Revolution, Elizabeth Suzanne Kassab does what we always needed but lacked in our understanding of the transnational uprisings the world has known as the 'Arab Spring.' She gives eloquent and precise voice to the revolutionary reasons behind the dramatic euphoria of those massive revolts. In doing so she does more than just being a responsible and deeply informed historian of ideas. She critically pushes those ideas toward the distant boundaries of their next epistemic breakthroughs. This is a work of profound intellectual integrity by a leading Arab thinker of her generation. Hamid Dabashi, author of The Arab Spring: The End of Postcoloniality

Kassab uncovers a rich and varied debate taking place in Arabic starting in the 1990s and centered on notions of tanwir (Enlightenment) that provides important context for understanding the Arab uprisings, particularly in Egypt and Syria, as well as for gauging their inherent possibilities, even as their full outcome yet remains unknown. Michaelle Browers, author of Political Ideology in the Arab World: Accommodation and Transformation

Elizabeth Suzanne Kassab, a leading expert on contemporary Arab thought, invites us on an extraordinary journey into the inner intellectual life of a generation on the eve of revolution. Lucid, powerful, and essential. Yoav Di-Capua, author of No Exit: Arab Existentialism, Jean-Paul Sartre, and Decolonization

Enlightenment on the Eve of Revolution is an indispensable addition to the literature about the Arab Spring. Tackling immensely important, previously unanswered questions regarding the modern Arab world, Elizabeth Suzanne Kassab gives intellectual and cultural context to new Arab movements. Orit Bashkin, author of The Other Iraq: Pluralism and Culture in Hashemite Iraq

A valuable study of the intellectual history of contemporary Egypt and Syria, which documents for English-speaking readers the two decades before the Arab Spring. It is a must-read for scholars and students of history, Middle East studies, political science and cultural studies. Arab Studies Quarterly

Kassab's approach to the emergence of tanwir discourse is comparative and contextual. The Middle East Journal

An intellectually rich corpus of Arabic critiques of both Islamism and authoritarianism that are as philosophically adept as they are sociologically shrewd. Enlightenment on the Eve of Revolution: The Egyptian and Syrian Debates is a philosopher’s testament to intellectual courage and a persuasive reminder of the universality of reason. Los Angeles Review of Books

Elizabeth Suzanne Kassab is associate professor of philosophy at the Doha Institute for Graduate Studies. She is the author of Contemporary Arab Thought: Cultural Critique in Comparative Perspective (Columbia, 2009), recipient of the prestigious Sheikh Zayed Book Award for its Arabic edition.