What the Fossils Say and Why It Matters 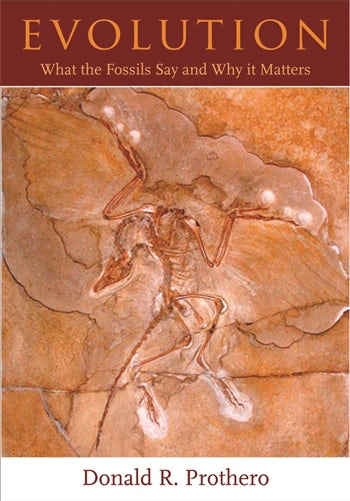 What the Fossils Say and Why It Matters

Over the past twenty years, paleontologists have made tremendous fossil discoveries, including fossils that mark the growth of whales, manatees, and seals from land mammals and the origins of elephants, horses, and rhinos. Today there exists an amazing diversity of fossil humans, suggesting we walked upright long before we acquired large brains, and new evidence from molecules that enable scientists to decipher the tree of life as never before.

The fossil record is now one of the strongest lines of evidence for evolution. In this engaging and richly illustrated book, Donald R. Prothero weaves an entertaining though intellectually rigorous history out of the transitional forms and series that dot the fossil record. Beginning with a brief discussion of the nature of science and the "monkey business of creationism," Prothero tackles subjects ranging from flood geology and rock dating to neo-Darwinism and macroevolution. He covers the ingredients of the primordial soup, the effects of communal living, invertebrate transitions, the development of the backbone, the reign of the dinosaurs, the mammalian explosion, and the leap from chimpanzee to human. Prothero pays particular attention to the recent discovery of "missing links" that complete the fossil timeline and details the debate between biologists over the mechanisms driving the evolutionary process.

Evolution is an absorbing combination of firsthand observation, scientific discovery, and trenchant analysis. With the teaching of evolution still an issue, there couldn't be a better moment for a book clarifying the nature and value of fossil evidence. Widely recognized as a leading expert in his field, Prothero demonstrates that the transformation of life on this planet is far more awe inspiring than the narrow view of extremists.

This is a wonderful book that beautifully explains in layperson's terms the vast evidence for evolution in the paleontological record. Its publication comes at a critical time. By concentrating the diverse scientific literature into numerous lucid examples, Donald R. Prothero does the fields of geology, biology, and science education a major service. He provides a unique source that will be invaluable to college professors and high school teachers alike, and because his book provides abundant, clearly described examples of evolution in the fossil record, and also synthesizes important information about the Bible, it will make a valuable addition to any scientist's library. Bruce Lieberman, University of Kansas

Donald R. Prothero is not only one of the leading evolutionary scientists of our time, he writes with clarity and his prose sparkles. Prothero's book is more thorough and comprehensive than any other book for the general public on the evolution versus creationism controversy. Michael Shermer, publisher of Skeptic magazine, monthly columnist for Scientific American, and author of Why Darwin Matters: The Case Against Intelligent Design

This book demonstrates the importance of paleontology to the study of evolution. Publishers Weekly

A must read...Brilliant and masterfully researched. Greg Sweatt, Fossil News

This is one of the best books of its kind. Christopher diCarlo, Guelph Mercury

The book is very valuable as a demonstration of the quality of the fossil record, which has improved dramatically in the past decade. Peter Dodson, Reports of the National Center for Science Education

(T)o anyone who wishes to be informed on our current knowledge about fossils and their interpretation, and for anyone who is still not so sure whom to believe, this book will straighten things out and will be an unforgettable reading experience. Zentralblatt fur Geologie und Palaontologie

Foreword: Why People Do Not Accept Evolution
To the Reader: Is Evolution a Threat to Your Religious Beliefs?
Prologue: Fossils and Evolution
Acknowledgments
Part I: Evolution and the Fossil Record
1. The Nature of Science
2. Science and Creationism
3. The Fossil Record
4. The Evolution of Evolution
5. Systematics and Evolution
Part II: Evolution? The Fossils Say YES!
6. Life's Origins
7. Cambrian "Explosion"—or Slow Fuse?
8. Spineless Wonders of Evolution
9. Fish Tales
10. Fish Out of Water
11. Onto the Land and Back to the Sea: The Amniotes
12. Dinosaurs Evolve—and Fly
13. Mammalian Explosion
14. Bossies and Blowholes
15. The Ape's Reflection?
16. Why Does It Matter?
Bibliography
Index

Read the chapter >"Science and Creationism"