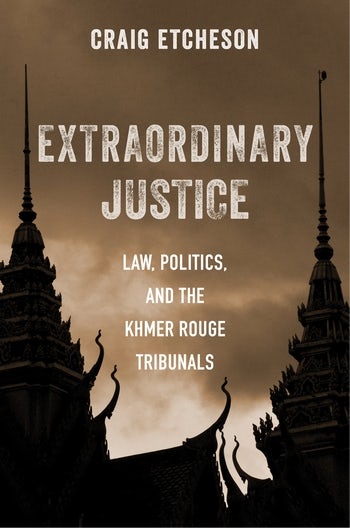 In just a few short years, the Khmer Rouge presided over one of the twentieth century’s cruelest reigns of terror. Since its 1979 overthrow, there have been several attempts to hold the perpetrators accountable, from a People’s Revolutionary Tribunal shortly afterward through the early 2000s Extraordinary Chambers in the Courts of Cambodia, also known as the Khmer Rouge Tribunal. Extraordinary Justice offers a definitive account of the quest for justice in Cambodia that uses this history to develop a theoretical framework for understanding the interaction between law and politics in war crimes tribunals.

Craig Etcheson, one of the world’s foremost experts on the Cambodian genocide and its aftermath, draws on decades of experience to trace the evolution of transitional justice in the country from the late 1970s to the present. He considers how war crimes tribunals come into existence, how they operate and unfold, and what happens in their wake. Etcheson argues that the concepts of legality that hold sway in such tribunals should be understood in terms of their orientation toward politics, both in the Khmer Rouge Tribunal and generally. A magisterial chronicle of the inner workings of postconflict justice, Extraordinary Justice challenges understandings of the relationship between politics and the law, with important implications for the future of attempts to seek accountability for crimes against humanity.

Extraordinary Justice hands down the final verdict on the UN’s controversial ‘mixed tribunal.’ Starting as an academic observer during the 1980s, Craig Etcheson worked as a fearless and tireless killing fields investigator during the 1990s and then played a key behind the scenesbehind-the-scenes role for the UN during the proceedings. Simply put, nobody knows more about the Khmer Rouge war crimes trials than Etcheson. This is a remarkable, three-dimensional study of the legally simple but politically complex proceedings that took longer to try five defendants than it did for the Allies did to try thousands of war criminals after World War II. Peter Maguire, author of Facing Death in Cambodia

Few have witnessed or studied the rise, demise, and prosecution of the Khmer Rouge as Craig Etcheson has done for more than three decades. Extraordinary Justice is a gripping eyewitness account of the Khmer Rouge leadership’s final coda in front of domestic and international justice, however imperfect that justice might be. Extraordinary Justice will be the definitive reference text for years to come. Sophal Ear, author of Aid Dependence in Cambodia: How Foreign Assistance Undermines Democracy

In this absorbing, persuasively argued book, Craig Etcheson draws on over thirty years of involvement with Cambodia and on his prolonged association with the so-called Khmer Rouge Tribunal, giving his readers a clear idea of what happened at the Tribunal and the daunting challenges it faced. David Chandler, author of A History of Cambodia, 4th Edition

Craig Etcheson is one of only a handful of people on the planet who, for the last four-plus decades, has immersed himself in the question of what the Khmer Rouge did while in power from 1975 to 1979 and how to bring them to justice for their crimes of genocide. Extraordinary Justice is a must-read for those interested in how the international community uses the cumbersome rule of law to convict those who thought they could get away with mass murder using their own ill-conceived, unrepentant law of the jungle. Michael Hayes, publisher and editor in chief of the Phnom Penh Post

A magisterial chronicle of the inner workings of post-conflict justice. International Law Reporter

Craig Etcheson is a visiting scientist at the Harvard T. H. Chan School of Public Health. From 2006 to 2012, he was chief of investigations for the Office of Co-Prosecutors at the Extraordinary Chambers in the Courts of Cambodia. His previous books on Cambodia include The Rise and Demise of Democratic Kampuchea (1984) and After the Killing Fields: Lessons from the Cambodian Genocide (2005).