Essays on Archives, Philosophy, and Methodology in Beckett Studies 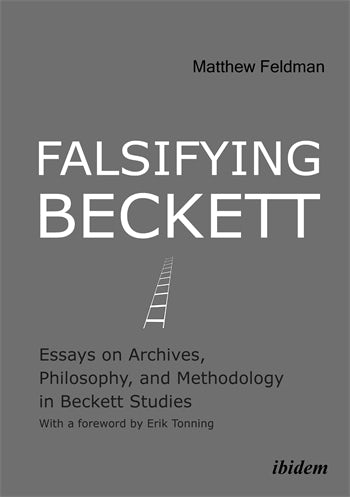 Essays on Archives, Philosophy, and Methodology in Beckett Studies

The dozen essays brought together here, alongside a newly-written introduction, contextualize and exemplify the recent 'empirical turn' in Beckett studies. Characterized, above all, by recourse to manuscript materials in constructing revisionist interpretations, this approach has helped to transform the study of Samuel Beckett over the past generation. In addition to focusing upon Beckett's early immersion in philosophy and psychology, other chapters similarly analyze his later collaboration with the BBC through the lens of literary history. Falsifying Beckett thus offers new readings of Beckett by returning to his archive of notebooks, letters, and drafts. In reassessing key aspects of his development as one of the 20th century's leading artists, this collection is of interest to all students of Beckett's writing as well as 'historicist' scholars and critics of modernism more generally.

Matthew Feldman has been one of the leading Beckett scholars of the past generation. These essays cumulatively testify to the standards he has set for empirical and archival research in this field. That we now speak of the 'grey canon' - the archive of notebooks and unpublished papers that have transformed our understanding of Beckett's debts and influences - is in no small part due to Feldman's ground-breaking interventions. Ronan McDonald, Director of the Global Irish Studies Centre at the University of New South Wales, Sydney, Australia

The common thread running through this richly furnished volume is the sheer diversity of ideas, echoes, and influences playing into the creative imagination of one of the twentieth centurys greatest writers. Matthew Feldmans nuanced analyses emerge from many years of sustained engagement with Becketts notebooks and drafts, and with the intellectual environment which surrounded their production. These insightful essays offer the reader an illuminating journey through Becketts writing and its cultural milieu. They will be indispensable for any serious scholar of Beckett. Mary Bryden, Professor of French Studies, University of Reading

Preface and Acknowledgements
Foreword by Professor Erik Tonning
Introduction
Part I: Methodology and Interpretation
1. "I inquired into myself": Beckett, Interpretation. Phenomenology? (2002)
2. Beckett and Popper, Or, "What stink of artifice": Some Notes on Methodology, Falsifiability, and Criticism in Beckett Studies (2006)
3. Beckett and Philosophy, 1928–1938: A Falsifiable Reappraisal (2012)
4. Beckett and Philosophy (2013)
Part II: Archives and Falsifiability
5. "Agnostic Quietism" and Samuel Beckett's Early Development (2009)
6. Beckett's Poss and the Dog's Dinner: An Empirical Survey of the 1930s "Psychology" and "Philosophy Notes" (2005)
7. Beckett and the BBC Radio Revisited (2014)
8. Beckett's Trilogy on the Third Programme (2014)
Part III: Archival Criticism and Beckett's Interwar Philosophical Note-taking
9. Samuel Beckett, Wilhelm Windelband and the interwar "Philosophy Notes" (2011)
10. Samuel Beckett, Wilhelm Windelband and nominalist philosophy (2011)
11. A "suitable engine of destruction"? Samuel Beckett and Arnold Geulincx's Ethics (2009)
12. "But what was this pursuit of meaning, in this indifference to meaning?": Beckett, Husserl, Sartre and "Meaning Creation" (2009)
Bibliography
Index

Matthew Feldman is professor in the modern history of ideas at Teesside University.