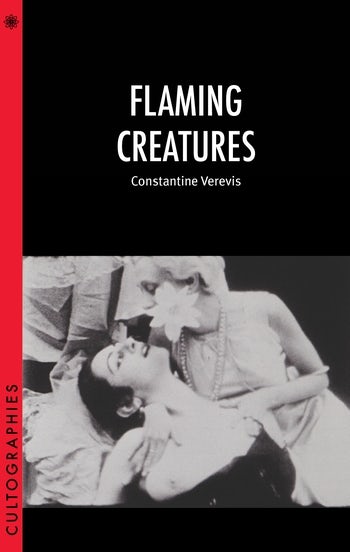 Banned soon after its first midnight screenings, the prints seized and the organizers arrested, Jack Smith’s incendiary Flaming Creatures (1963) quickly became a cause célèbre of the New York underground. Championed and defended by Jonas Mekas and Susan Sontag, among others, the film wildly and gleefully transgresses nearly every norm of Hollywood morality and aesthetics. In a surreal and visually dense series of episodes, the titular “creatures” reenact scenes drawn from the collective cinematic unconscious, playing on mainstream film culture’s moral code in a way that is at once a love letter to classical Hollywood and a searing send-up of its absurdities.

Constantine Verevis's Flaming Creatures dissects and maps with great affection the tangled network of intertextual appropriations Jack Smith performed in his landmark film. While the film has provoked censorship and admiration, scorn and expressions of the sublime, Verevis reveals Smith's "secret-flix" in rich detail, illuminating both aesthetic and cultural confrontations that now mark the transition to contemporary cinema. A feast of historical and filmic information. Janet Staiger, author of Perverse Spectators: The Practices of Film Reception

Flaming Creatures offers a comprehensive study of this classic and controversial avant-garde film, from its production and reception history to its complex, even fraught, place in the New York experimental scene, to scene-by-scene meanings, performance styles, and overall artistic accomplishments. Verevis even uses his well-known talents as a top scholar of film remakes to clarify the film’s status as a complicated yet loving ode to Hollywood kitsch. Dana Polan, New York University

Constantine Verevis is associate professor of film and screen studies at Monash University. He is the author of Film Remakes (2005) and coeditor of B Is for Bad Cinema (2014), among other titles.