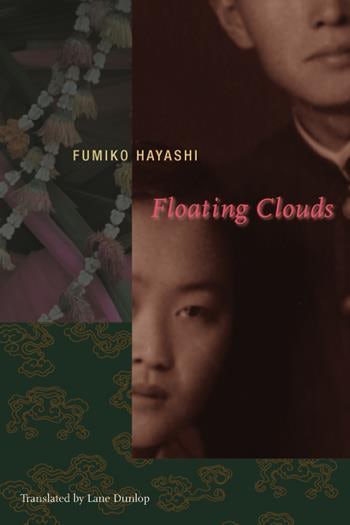 In this groundbreaking novel, Fumiko Hayashi tells the powerful story of tormented love and one woman's struggle to navigate the cruel realities of postwar Japan. The novel's characters, particularly its resilient heroine Koda Yukiko, find themselves trapped in their own drifting, unable to break out of the morass of indecisiveness. Set in the years during and after World War II, their lives and damaged psyches reflect the confusion of the times in which they live.

Floating Clouds follows Yukiko as she moves from the physically lush and beautiful surroundings of Japanese-occupied French Indochina to the desolation and chaos of postwar Japan. Hayashi's spare, affecting novel presents a rare portrait of Japanese colonialism and the harshness of Japan's postwar experience from the perspective of a woman. Its rich cast of characters, drawn from the back alleys of urban Japan and the low rungs of society, offers an unforgettable portrait of Japanese society after the war.

The tortured relationship between Yukiko and Tomioka, a minor official with the Department of Agriculture and Forestry, provides the dramatic center of the novel. Yukiko meets Tomioka while working as a typist for the Japanese ministry in Indochina, where they begin their affair. After the war, Tomioka returns to his wife but remains emotionally inscrutable to Yukiko, refusing to break off their relationship. Meanwhile, Yukiko must find her way in a radically changed postwar Japan. When Yukiko and Tomioka's lives once again cross, the two set down a path shaped by their passion and sense of desperation.

First published in 1951, Floating Clouds is a classic of modern Japanese literature and was later made into a film by legendary Japanese director Mikio Naruse.

Lane Dunlop's superb translation of Fumiko Hayashi's most celebrated postwar novel presents a striking portrait of a woman struggling amidst the social dislocations of the era. Floating Clouds captures the sense of rupture that pervaded personal trajectories and reflects the capacity of individuals to reconstruct hope and meaning among the debris of broken dreams. Joan Ericson, Colorado College, author of Be a Woman: Hayashi Fumiko and Modern Japanese Women's Literature

Floating Clouds, one of Fumiko Hayashi's late masterpieces, draws from the store of her own remarkable experiences in its depiction of the chaotic, uncertain, wounded worlds of postwar Japan. With a poignantly simple prose style, gracefully translated by Lane Dunlop, she captures the tumult of the time, the arrogance of colonialism, and the impotence of defeat. Rebecca Copeland, Washington University in St. Louis, author of Lost Leaves: Women Writers of Meiji Japan

The novel effectively conveys the troubling ramifications of the Japanese occupation of Indochina during World War II. Library Journal

It is fitting that [Dunlop] give us this important novel in its first trustworthy and readable English edition. The Japan Times

A sprawling portrait of Japan just after the end of World War II... Lane Dunlop's translation is excellent. Janine Beichman, The Japan Journal

[A] powerful and moving work. M.A.Orthofer, The Complete Review

Read an >excerpt from Floating Clouds.

Fumiko Hayashi (1904–1951) was a novelist, poet, and short story writer both critically and popularly loved in Japan. Widely heralded as one of the most important Japanese novelists of the twentieth century, she is also the author of the novel Horoki.

Lane Dunlop is also the translator of the anthology A Late Chrysanthemum: Twenty-One Stories from the Japanese, two novellas by Nagai Kafu, and a short story collection by Kawabata Yasunari. He was awarded an Academy Award in Literature by the American Academy of Arts and Letters.