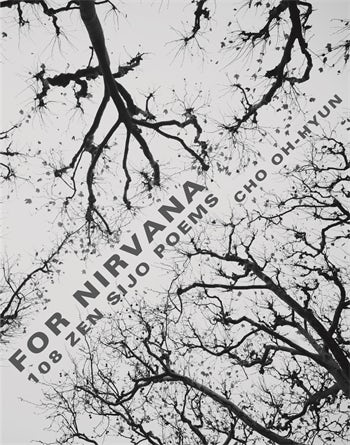 For Nirvana features exceptional examples of the poet Cho Oh-Hyun's award-winning work. Cho Oh-Hyun was born in Miryang, South Gyeongsang Province, Korea, and has lived in retreat in the mountains since becoming a novice monk at the age of seven. Writing under the Buddhist name Musan, he has composed hundreds of poems in seclusion, many in the sijo style, a relatively fixed syllabic poetic form similar to Japanese haiku and tanka. For Nirvana contains 108 Zen sijo poems (108 representing the number of klesas, or "defilements," that one must overcome to attain enlightenment). These transfixing works play with traditional religious and metaphysical themes and include a number of "story" sijo, a longer, more personal style that is one of Cho Oh-Hyun's major innovations. Kwon Youngmin, a leading scholar of sijo, provides a contextualizing introduction, and in his afterword, Heinz Insu Fenkl reflects on the unique challenges of translating the collection.

Reading these translations of Cho Oh-hyun's Zen sijo is like shining a light on a carefully cut, many-faceted stone. The poems are concentrated, understated, and effortlessly colloquial, both immediately accessible and, paradoxically, mysterious. The Zen nature of the poems' inquiries and observations—with their allusiveness and open-endedness—bear up under many readings, defying prized Western rationality and yielding a surprisingly rich range of tones, moods, and insights. Elizabeth Spires, poet and author of The Wave-Maker and Now the Green Blade Rises

While some of the poems embrace the kind of open-ended imagery commonly associated with Buddhist poetry, Cho innovates in this volume with narrative techniques that engage the senses and the imagination. World Literature Today

Monk Cho. . . . is not simply another Zen Buddhist, like those I found in the Korean history. Rather, he is his own Zen monk writing his own style of sijo. Yearn Hong Choi, Korean Quarterly

Patience here is a virtue, for the more time one spends with these poems, the more they seem to reveal, not merely about the Zen philosophy of the one who wrote them, but about the inner nature of the one who reads them as well. To simply read this collection of poems takes less than an hour. To gain all that might be gained from them would no doubt be the work of a lifetime. Koreana

Contents
Preface
Introduction, by Kwon Youngmin
Bitter Flower
Daydream
Distant Holy Man
Elm Tree & Moon
Desire, Deeper than the Marrow
What I've Always Said
The Sound of Ancient Wood
The Dance & the Pattern
Spring
Musan's Ten Bulls
1. Searching for the Bull
2. Finding the Footprints
3. Seeing the Bull
4. Catching the Bull
5. Taming the Bull
6. Riding the Bull Home
7. The Bull Transcended
8. Both Bull & Self Transcended
9. Reaching the Source
10. Return to Society
Regarding My Penmanship
Weekend Scrawl
Wild Foxes
Hoarse
Speaking Without Speaking 1
Speaking Without Speaking 2
Speaking Without Speaking 3
Speaking Without Speaking 4
Speaking Without Speaking 5
Speaking Without Speaking 6
Waves
What the Northeast Wind Said 1
What the Northeast Wind Said 2
What The Southeast Wind Said
Ancient Rules for Everyman
3. Amdu—Drowned Man
4. Joju's Great Death
11. Gaesa Entering the Bath
13. Chuimi's Zen Gong
Buddha
Children of Namsan Valley
Walking in Place
The Path of Love
At the Razor's Edge
Crime & Punishment
Today's Beaming
The Way to Gyerimsa Temple
Jikjisa Temple Travel Diary
1. The Way Forward
2. Not Two Gates
3. Sitting Buddha
4. Blue Crane—Zen Master Yeongheo
5. Stone Lamp
6. Cold Lamp—Master White Water
7. Mind Moon
Tales from the Temple
2. The Seagulls & the East Sea
3. Two Squirrels
16. The Cry of Wild Ducks
25. The Otter & the Hunter
29. The Green Frog
The Way to Biseul Mountain
2007—Seoul at Noon
2007—Seoul at Night
Wild Ducks & Shadow
Winter Mountain Beasts
A Day at Old Fragrance Hall
Bodhidharma 1
Bodhidharma 2
Bodhidharma 3
Bodhidharma 4
Bodhidharma 5
Bodhidharma 6
Bodhidharma 7
Bodhidharma 8
Bodhidharma 9
Bodhidharma 10
Sunset, Bay of Incheon
The Sea
Words of a Boatman
Moments I Wished Would Linger
You and I: Our Outcry
You and I: Our Lamentation
Siblings
When the Dawn Comes Down
A Fistful of Ashes
Holding on to a Finger
When the Thunder God Came to My Body
Opening the Mountain-Side Window
Proximation
Sun & Moon
Arising, Passing, Attachment
The Wind that Once Wept in the Pine Grove
Gwanseum
This Body of Mine
The Day I Try Dying
As I Look Upon Myself
Waning Landscape
At the Tomb of King Seondeok
Forest
New Shoots
Early Spring
Three Views of Spring
The Sound of My Own Cry
All the Same at Journey's End
Scarecrow
Days Living on the Mountain
Vapors
My Lifelines
Embers (Afterword)
Translator's Afterword
Acknowledgments

Cho Oh-Hyun is in retreat at Baekdamsa Temple at Mt. Seoraksan. The lineage holder of the Mt. Gaji school of Korean Nine Mountains Zen, he received the Cheong Chi-yong Literary Award for Distant Holy Man in 2007, and translations of his work have appeared in Asymptote, the Buddhist Poetry Review, Asia Literary Review, Azalea, and the Adirondack Review.

Heinz Insu Fenkl is associate professor of English and Asian studies at SUNY New Paltz. He is the author of Memories of My Ghost Brother and is working on a translation of Yi Mun-yol's novella Meeting with My Brother.