The Qing Empire and the Politics of Reincarnation in Tibet 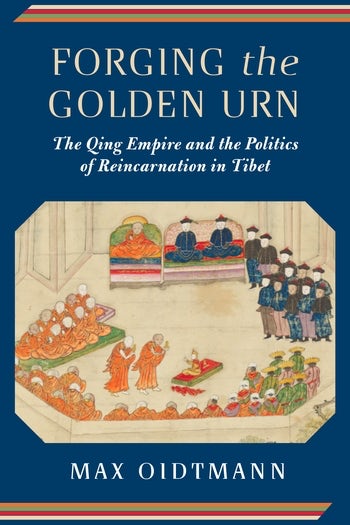 The Qing Empire and the Politics of Reincarnation in Tibet

In 1995, the People’s Republic of China resurrected a Qing-era law mandating that the reincarnations of prominent Tibetan Buddhist monks be identified by drawing lots from a golden urn. The Chinese Communist Party hoped to limit the ability of the Dalai Lama and the Tibetan government-in-exile to independently identify reincarnations. In so doing, they elevated a long-forgotten ceremony into a controversial symbol of Chinese sovereignty in Tibet.

In Forging the Golden Urn, Max Oidtmann ventures into the polyglot world of the Qing empire in search of the origins of the golden urn tradition. He seeks to understand the relationship between the Qing state and its most powerful partner in Inner Asia—the Geluk school of Tibetan Buddhism. Why did the Qianlong emperor invent the golden urn lottery in 1792? What ability did the Qing state have to alter Tibetan religious and political traditions? What did this law mean to Qing rulers, their advisors, and Tibetan Buddhists? Working with both the Manchu-language archives of the empire’s colonial bureaucracy and the chronicles of Tibetan elites, Oidtmann traces how a Chinese bureaucratic technology—a lottery for assigning administrative posts—was exported to the Tibetan and Mongolian regions of the Qing empire and transformed into a ritual for identifying and authenticating reincarnations. Forging the Golden Urn sheds new light on how the empire’s frontier officers grappled with matters of sovereignty, faith, and law and reveals the role that Tibetan elites played in the production of new religious traditions in the context of Qing rule.

An absorbing read for non-specialists. Asian Review of Books

Not only does Max Oidtmann do an excellent job providing a captivating account of a famed religious implement in an imperial context, he also opens a valuable window on how Tibet existed as part of an empire during that time. Reading Religion

Oidtmann’s eloquent and learned book is thus essential reading for anyone who wants to understand the Qing political order. Joseph Lawson, Modern Chinese Literature and Culture

What he brings to the table is an extensive insight into the thinking and debates over the Golden Urn’s introduction
among the Manchu authorities, and most particularly those of the aging Qianlong emperor (1711–99) himself. Martin A. Mills, Journal of Asian Studies

The relationship between Qing China and Tibetan elites is explored in this fascinating work based on Manchu, Tibetan, and Chinese sources. Choice

[Forging the Golden Urn] serves as an outstanding model for how to avoid the anachronisms that tend to haunt the historical study of matters mired in contemporary polemics. James Gentry, University of Virginia, Journal of Chinese Religions

Max Oidtmann explores the impact of the golden urn ritual that the Qianlong emperor introduced in the early 1790s in order to—as he claimed—make the recognition of reincarnated lamas legitimate. The impact of this ritual innovation and its introduction into Tibet had profound consequences, not least regarding how it was subsequently interpreted by the Chinese on one side and the Tibetans and their Western supporters on the other. Oidtmann’s work steps deftly into this binary historiographical struggle and brilliantly shows that everything was not only far more complicated than either side claims, but also far more interesting. In doing so, Forging the Golden Urn queries the actual nature of Qing rule in Tibet. Johan Elverskog, Southern Methodist University

Using new source material, Max Oidtmann’s Forging the Golden Urn opens a window to a better understanding of the dynamics that resulted in Tibet’s increasing incorporation into the Qing empire. Framing these imperial efforts as a legal enterprise first and foremost, Oidtmann provides a fresh approach to examine the Qing’s strategy for expanding and justifying its sovereignty. This excellent book—obviously a result of sound and careful research—is a major achievement. Peter Schwieger, University of Bonn

Oidtmann’s book opens up new perspectives on the intricate relationship that existed toward the end of the eighteenth century between Lhasa and the Qing court. The presence of reincarnate lamas is a defining feature of Tibetan Buddhism; Oidtmann brilliantly details its political dimension and the way the Qianlong emperor and his court decided to introduce the golden urn as a means to control the process by which reincarnate lamas were selected. Forging the Golden Urn is a tour de force and should be required reading for anyone interested in the history of Tibet, Qing history, and the history of Inner Asia. Leonard van der Kuijp, Harvard University

Max Oidtmann’s tour de force is in introducing the reader to the mysteries of both Manchu and Tibetan powers. [He] offers a remarkable and finely crafted study. Inner Asia