Foundations of the American Century

The Ford, Carnegie, and Rockefeller Foundations in the Rise of American Power 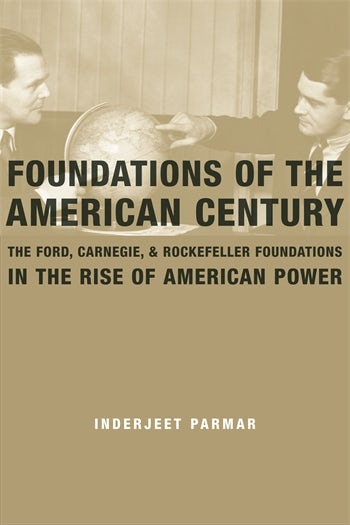 Foundations of the American Century

The Ford, Carnegie, and Rockefeller Foundations in the Rise of American Power

Inderjeet Parmar reveals the complex interrelations, shared mindsets, and collaborative efforts of influential public and private organizations in the building of American hegemony. Focusing on the involvement of the Ford, Rockefeller, and Carnegie foundations in U.S. foreign affairs, Parmar traces the transformation of America from an "isolationist" nation into the world's only superpower, all in the name of benevolent stewardship.

Parmar begins in the 1920s with the establishment of these foundations and their system of top-down, elitist, scientific giving, which focused more on managing social, political, and economic change than on solving modern society's structural problems. Consulting rare documents and other archival materials, he recounts how the American intellectuals, academics, and policy makers affiliated with these organizations institutionalized such elitism, which then bled into the machinery of U.S. foreign policy and became regarded as the essence of modernity.

America hoped to replace Britain in the role of global hegemon and created the necessary political, ideological, military, and institutional capacity to do so, yet far from being objective, the Ford, Rockefeller, and Carnegie foundations often advanced U.S. interests at the expense of other nations. Incorporating case studies of American philanthropy in Nigeria, Chile, and Indonesia, Parmar boldly exposes the knowledge networks underwriting American dominance in the twentieth century.

Foundations of the American Century is at the cutting edge of international and transnational history, and its greatest strength is, undoubtedly, the range and analysis of the archives Inderjeet Parmar consults and discusses throughout. Craig N. Murphy, University of Massachusetts, Boston, and Wellesley College

This broad, inclusive book is written on a grand scale. The result is an indispensable text for students of large-scale philanthropy and for anyone wishing to learn about the substantial influence exerted by the Rockefeller, Carnegie, and Ford Foundations on the rise and consolidation of the United States as the dominant world economy in the twentieth century. Inderjeet Parmar traces the construction of elite networks spanning the boundaries separating philanthropy, the academy, and the state as the means for creating U.S. hegemony on the world stage. Donald Fisher, University of British Columbia

With Foundations of the American Century, Inderjeet Parmar has produced the most wide-ranging and sophisticated historical account of the international role of American philanthropic foundations to date. Parmar reopens the debate about the cultural instruments of American foreign policy by emphasizing, beyond the success or failure of their programs and beyond their political oscillations, the importance of the international networks that foundations have established over the past century. Building on impressive amounts of archival material that spans an entire century of philanthropic activity on several continents, and tracing the aftereffects of this history in the post–Cold War era and the early twenty-first century, Parmar's book is bound to become a landmark in foundation literature. It will be of interest to cultural historians, international relations scholars, political scientists, and anyone interested in the nature of American power and liberal internationalism. Nicolas Guilhot, author of The Democracy Makers: Human Rights and the Politics of Global Order

This scholarly treatment of institutionalized philanthropy is a good pick for students and researchers of history and political science. Library Journal

...a valuable resource for historians of philanthropy and U.S. foreign policy...anyone interested in the behind-the-scenes operations of the Ford, Carnegie, and Rockefeller foundations from their inception to the present day will find the author's chronicling of events riveting. Chuck Bartelt, Philanthropy News Digest

an interesting and richly detailed story about how elite networks function in democratic societies such as America's, and how they can further particular agendas at home and abroad. Nicolas Bouchet, International Affairs

The most thorough account of the foreign policy impact of twentieth-century U.S. philanthropic foundations. Nils Gilman, Journal of American History

Parmar's accomplished account...constitutes a detailed analysis of their origins, their aims, and their impacts. The Hindu

an important contribution to a thriving field. Katharina Rietzler, Argentia

this book is a great achievement, one that will probably outlast the American hegemony whose anatomy it so brilliantly reveals. Bastiaan Van Apeldoorn, Political Studies Review

Students of this important topic will appreciate this pioneering work. Foreign Affairs

[An] important contribution to the history of philanthropy. George Blaustein, American Quarterly

Parmar offers a powerful leftist critique of the work of foundations abroad and the inner working of elite networks in the United States and around the world. His book is an important addition to foundation history and should be an integral part of foundation literature. Nonprofit and Voluntary Sector Quarterly

Inderjeet Parmar is professor of international politics and head of the Department of International Politics at City University London. He is the coeditor of Obama and the World: New Directions in U.S. Foreign Policy and Barack Obama and the Myth of a Post-Racial America. His new book project is entitled Presidents and Premiers at War: Race, Elitism, and Empire in Anglo-American Wars from Korea to the War on Terror.