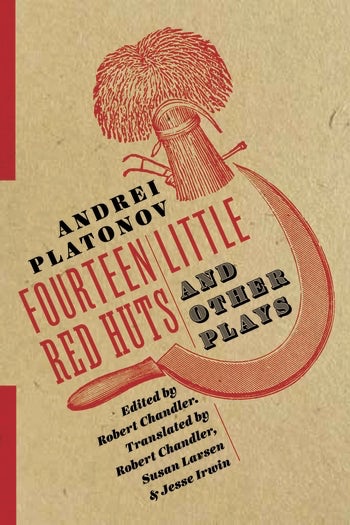 In this essential collection of Andrei Platonov's plays, the noted Platonov translator Robert Chandler edits and introduces The Hurdy-Gurdy (translated by Susan Larsen), Fourteen Little Red Huts (translated by Chandler), and Grandmother's Little Hut (translated by Jesse Irwin). Written in 1930 and 1933, respectively, The Hurdy-Gurdy and Fourteen Little Red Huts constitute an impassioned and penetrating response to Stalin's assault on the Soviet peasantry. They reflect the political urgency of Bertolt Brecht and anticipate the tragic farce of Samuel Beckett but play out through dialogue and characterization that is unmistakably Russian. This volume also includes Grandmother's Little Hut, an unfinished play that represents Platonov's later, gentler work.

Part horror story, part ideological stand-up comedy, Platonov's plays depict an absurd, nightmarish world in which hope and cynicism are inextricable. Their publication in this appropriately clever and meticulously annotated translation serves as an important contribution to our understanding of one of the twentieth century's most tragic chapters. Platonov, whose complex prose has already established him as Russia's closest equivalent to Faulkner, here emerges as a dramatist who can easily enter into conversation with Beckett. Eric Naiman, author of Nabokov, Perversely

Absurd, grotesque and seemingly surreal, the topsy-turvy world of Platonov's plays captures the disturbing reality of Stalin's Russia in the 1930's with precision, irreverence and verbal virtuosity! The stunning translation offers a unique opportunity for English-speaking readers and audiences to encounter one of the most uncompromising and visionary Russian writers of the last century. Irina Brown, Opera and Theatre Director

This collection of three plays by Andrei Platonov brings still more of his remarkable output to the attention of an English-language readership. Marginalized by Soviet literary officialdom, Platonov was an instinctive modernist who produced a series of prose works that are by turns hauntingly disturbing and beautiful. So too in the handful of works he wrote for the stage: in response to the grotesque Stalinist reality around him, his deformative instincts produced plays that anticipate Kharms, Becket, and Ionesco. These translations by Robert Chandler, Jesse Irwin, and Susan Larsen deftly render them in idiomatic English. Thomas Seifrid, author of A Companion to Andrei Platonov's The Foundation Pit

I squint back on our century and I see six writers I think it will be remembered for. They are Marcel Proust, Franz Kafka, Robert Musil, William Faulkner, Andrei Platonov and Samuel Beckett.... They are summits in the literary landscape of our century.... What's more, they don't lose an inch of their status when compared to the giants of fiction from the previous century. Joseph Brodsky

In Russia it is Platonov who is increasingly described as the best writer of the post-revolutionary epoch. Victor Erofeyev, Times Literary Supplement

Platonov's little-known 1930s dramas give us a chilling snapshot of times that echo our own in curious ways. . . . Working with fellow translators, [Robert Chandler] has brought many of Platonov's works, which were censored and suppressed during his lifetime, to Anglophone readers. Phoebe Taplin, Russia Beyond the Headlines

These vital plays are richly Russian and subversively anti-Stalin. Absurd, horror-laden and even grim, they offer an incomparably vivid porthole into that dark era of Russian history. Paul E. Richardson, Russian Life

The two main pieces in this collection, The Hurdy-Gurdy and Fourteen Little Red Huts, are astonishing, tragi-comic passion plays, full of bizarre imagery and black humour. . . . All in all, this is not only essential reading for fans of Platonov’s prose, but a fascinating sourcebook for anyone with an interest in the culture and politics of the Stalin era. Rose France, Translation and Literature

Either as an individual or in collaboration with other translators, Chandler has made
it possible for those who do not read Russian to become acquainted with works far
beyond The Foundation Pit (Kotlovan), that mainstay of Russian literature classes. Kevin Reese University of North Carolina, Chapel Hill, Slavic Review

Robert Chandler has translated widely from Russian. He is also the editor of Russian Short Stories from Pushkin to Buida (2006) and coeditor of The Penguin Book of Russian Poetry (2015).