Fred Friendly and the Rise and Fall of Television Journalism 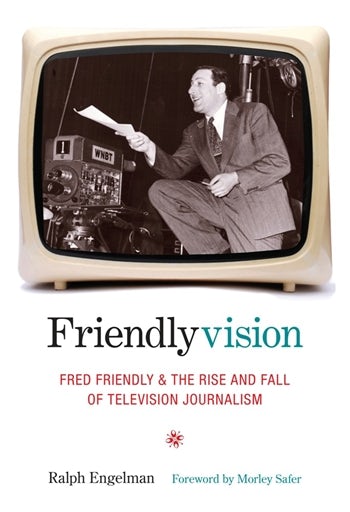 Fred Friendly and the Rise and Fall of Television Journalism

Fred Friendly (1915-1998) was the single most important personality in news and public affairs programming during the first four decades of American television. Portrayed by George Clooney in the film Good Night and Good Luck, Friendly, together with Edward R. Murrow, invented the television documentary format and subsequently oversaw the birth of public television. Juggling the roles of producer, policy maker, and teacher, Friendly had an unprecedented impact on the development of CBS in its heyday, wielded extensive influence at the Ford Foundation under the presidency of McGeorge Bundy, and trained a generation of journalists at Columbia University during a tumultuous period of student revolt.

Ralph Engelman's biography is the first comprehensive account of Friendly's life and work. Known as a "brilliant monster," Friendly stood at the center of television's unique response to McCarthyism, Watergate, and the Vietnam War, and the pitched battles he fought continue to resonate in the troubled world of television news. Engelman's fascinating psychological portrait explores the sources of Friendly's legendary rage and his extraordinary achievement. Drawing on private papers and interviews with colleagues, family members, and friends, Friendlyvision is the definitive story of broadcast journalism's infamous "wild man," providing a crucial perspective on the past and future character of American journalism.

Broadcast news might have been saved if we had figured out how to clone Fred Friendly. Read this book and you'll understand the gruff, restless, brilliant, temperamental, and driven giant of a man who fought to make the vast wasteland safe for journalism. Bill Moyers, award-winning journalist and public commentator

Friendlyvision is an important and rigorous piece of scholarship that is also well written and highly readable. A first-rate biography of an important figure, this book conveys the values Fred Friendly enunciated and the industry he helped forge, which remains more important than ever. Everette Dennis, Fordham University

This book is a significant and original contribution, not only because it is the first scholarly biography of an important figure in television, but also because it uses new archival sources to fill gaps in our knowledge and give us an opportunity to reinterpret key events in Fred Friendly's life. Don Carleton, Center for American History, University of Texas at Austin

A substantial and useful study of the underknown pioneer whose conviction and energy did much to shape the content and character of American broadcast journalism. Kirkus Reviews

Richly detailed... The book opens a singular window on an important vision that Friendly shared with others... Recommended. Choice

Friendlyvision will likely become not only the authoritative biography of Fred Friendly, but also a valuable secondary text. Ben Eltham, Media International Australis

A nuanced and thoughtful portrayal of one of the foremost figures in the history of American broadcast journalism. Michael Curtin, Journal of American History

Ralph Engelman chairs the Journalism Department at the Brooklyn Campus of Long Island University. A member of the jury of the George Polk Awards and the coordinator of the annual George Polk Awards Seminar, he is the author of Public Radio and Television in America: A Political History.