Classical Islamic Ethics of the Self, Family, and Society 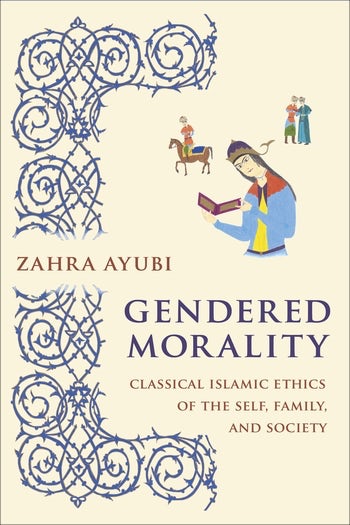 Classical Islamic Ethics of the Self, Family, and Society

Islamic scriptural sources offer potentially radical notions of equality. Yet medieval Islamic philosophers chose to establish a hierarchical, male-centered virtue ethics. In Gendered Morality, Zahra Ayubi rethinks the tradition of Islamic philosophical ethics from a feminist critical perspective. She calls for a philosophical turn in the study of gender in Islam based on resources for gender equality that are unlocked by feminist engagement with the Islamic ethical tradition.

Developing a lens for a feminist philosophy of Islam, Ayubi analyzes constructions of masculinity, femininity, and gender relations in classic works of philosophical ethics. In close readings of foundational texts by Abu Hamid Muhammad al-Ghazali, Nasir-ad Din Tusi, and Jalal ad-Din Davani, she interrogates how these thinkers conceive of the ethical human being as an elite male within a hierarchical cosmology built on the exclusion of women and nonelites. Yet in the course of prescribing ethical behavior, the ethicists speak of complex gendered and human relations that contradict their hierarchies. Their metaphysical premises about the nature of the divine, humanity, and moral responsibility indicate a potential egalitarian core. Gendered Morality offers a vital and disruptive new perspective on patriarchal Islamic ethics and metaphysics, showing the ways in which the philosophical tradition can support the aims of gender justice and human flourishing.

In Gendered Morality, Ayubi explores Muslim masculinity as imagined by influential medieval scholars. Her turn to ethics—understood not as a vague catch-all phrase for right living but as a rigorous and exacting genre within Muslim thought—represents a significant contribution to scholarship. She also offers a constructive feminist account of what might be retrievable for Muslim philosophical ethics. This is an essential and innovative book. Kecia Ali, Boston University

Turning the lens of gender analysis to the study of Islamic ethics, Zahra Ayubi interrogates the most formidable texts of the Persianate philosophical tradition. The result is a persuasive demonstration of feminist scholarship and a welcome contribution to Islamic studies. Carl W. Ernst, William R. Kenan Jr. Distinguished Professor, University of North Carolina at Chapel Hill

In this brilliant and wonderfully creative book, Zahra Ayubi combines a sophisticated analysis of Islamic ethics with a strikingly original feminist critique. Her work is a major achievement in the fields of medieval Islamic philosophy as well as feminist theory. Indeed, this is one of the most important and innovative works in the field of feminism and religion. Susannah Heschel, Eli Black Professor of Jewish Studies, Dartmouth College

Zahra Ayubi presents compelling evidence to show how medieval Islamic scholars created a philosophical system of ethics that is inherently gendered. The insights she provides as to how truth and virtue were cast in masculine, paternal terms and how those terms shaped beliefs about human agency and happiness are profound. Her concluding vision of a 'feminist philosophy' based on justice promises to render Gendered Morality a tour de force in the field. Kathryn Kueny, author of Conceiving Identities: Maternity in Medieval Muslim Discourse and Practice

In revealing the deep-rooted gendered and hierarchical cosmology prevailing in the classical Islamic world view, the author provides a realistic pathway to her goal of establishing a feminist philosophy of Islamic ethics...Recommended. Choice

Zahra Ayubi is assistant professor of religion at Dartmouth College.