Toward a Feminist Theory of War 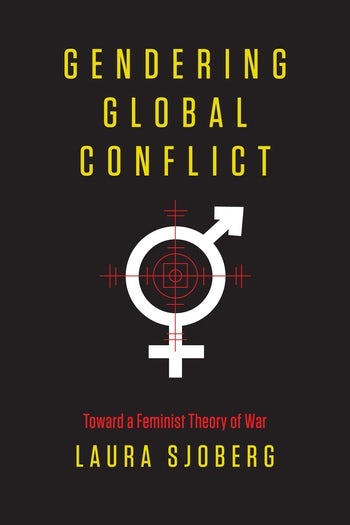 Toward a Feminist Theory of War

Laura Sjoberg positions gender and gender subordination as key factors in the making and fighting of global conflict. Through the lens ofgender, she examines the meaning, causes, practices, and experiences of war, building a more inclusive approach to the analysis of violent conflict between states.

Considering war at the international, state, substate, and individual levels, Sjoberg's feminist perspective elevates a number of causal variables in war decision-making. These include structural gender inequality, cycles of gendered violence, state masculine posturing, the often overlooked role of emotion in political interactions, gendered understandings of power, and states' mistaken perception of their own autonomy and unitary nature. Gendering Global Conflict also calls attention to understudied spaces that can be sites of war, such as the workplace, the household, and even the bedroom. Her findings show gender to be a linchpin of even the most tedious and seemingly bland tactical and logistical decisions in violent conflict. Armed with that information, Sjoberg undertakes the task of redefining and reintroducing critical readings of war's political, economic, and humanitarian dimensions, developing the beginnings of a feminist theory of war.

A superb contribution to the field, this book is the first full-scale attempt to link feminist theory with the established, mainstream work on war as an empirical puzzle to be solved. Patrick James, Center for International Studies, University of Southern California

With formidable prowess, Sjoberg engages tools from realist, liberal, constructivist, poststructuralist, and postcolonial perspectives to advance a systematic, feminist theorization of war. This stunning achievement warrants attention by all who seek to improve our understanding and alter our practices of war. V. Spike Peterson, University of Arizona

In this definitive work, Laura Sjoberg makes an incontrovertible case that feminist security studies is neither superfluous nor an oxymoron. Through her extensive command of the vast war studies literature and decades of feminist international relations scholarship, she powerfully and effectively argues that security studies, from realist to critical, fail to explain why and how states go to war without feminist theories. Exhaustively detailing how feminist perspectives and research significantly account for the propensities for, the conduct of, and lived experiences in war, she demonstrates feminism not only can but also must 'occupy' security studies for both better and transformative understandings of war. Anne Sisson Runyan, Charles Phelps Taft Research Center, University of Cincinnati

Gendering Global Conflict is a monumental work that deserves to be widely read.... The work is exhaustively researched and footnoted, with an extensive literature review of current approaches to studying gender in conflict... Highly recommended. Choice

Thoughtful and insightful... Well-written and accessible... Laura Sjoberg offers a convincing account as to why gender should be taken seriously when we consider both the causes and the impacts of war, whilst managing to speak to a mainstream, as well as feminist, security audience. Gender and Development

Laura Sjoberg's book, Gendering Global Conflict, is extremely relevant. Through a systematic and well-argued critique, she shows how deeply embedded masculinity is in mainstream studies of war best suited for students at the graduate level. Politics & Gender

Laura Sjoberg is associate professor of political science, affiliated with the Center for Women's and Gender Studies at the University of Florida. Her research focuses on theoretical and empirical approaches to gender and security, including war theorizing and the study of women's violence.