History, Geopolitics, and Life on Earth 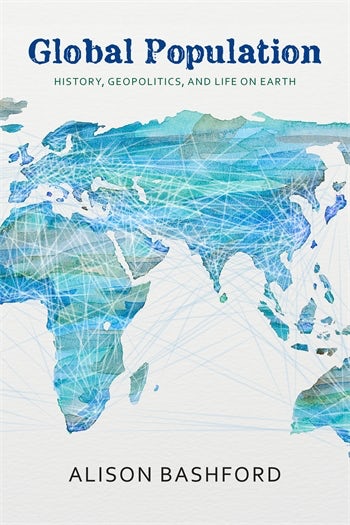 History, Geopolitics, and Life on Earth

Concern about the size of the world's population did not begin with the "population bomb" in 1968. It arose in the aftermath of World War I and was understood as an issue with far-reaching ecological, agricultural, economic, and geopolitical consequences. The world population problem concerned the fertility of soil as much as the fertility of women, always involving both "earth" and "life."

Global Population traces the idea of a world population problem as it evolved from the 1920s through the 1960s. The growth and distribution of the human population over the planet's surface came deeply to shape the characterization of "civilizations" with different standards of living. It forged the very ideas of development, demographically defined three worlds, and, for some, an aspirational "one world."

Drawing on international conference transcripts and personal and organizational archives, this book reconstructs the twentieth-century population problem in terms of migration, colonial expansion, globalization, and world food plans. Population was a problem in which international relations and intimate relations were one. Global Population ultimately shows how a geopolitical problem about sovereignty over land morphed into a biopolitical solution, entailing sovereignty over one's person.

With this engaging, wide-ranging, and impressively researched book, which tracks the global history of the 'world population problem'—including fascinating forays into debates on eugenics, birth control, colonization, soil, food, agriculture, and the carrying capacity of the earth—Bashford joins a very select group of historians who have recently taken the familiar narratives of world history in an entirely new direction: toward the historical origins of modern 'planetary consciousness.' A timely and brilliant piece of work. Dipesh Chakrabarty, University of Chicago

The earth, and population, and death—for much of the twentieth century, those were the facts when it came to brass tacks, as Alison Bashford convincingly shows in this wide-ranging, ground-breaking study. Global Population brings together geopolitics and eugenics, feminism and Malthusianism, ecology and economics in surprising and often counterintuitive combinations. The result is a major contribution to global intellectual history. David Armitage, Harvard University

This is the most fascinating and informative history on global population that this reviewer has ever read. Bashford's very impressive work will be of most interest to advance graduate students and faculty... Highly recommended. CHOICE

Alison Bashford's Global Population: History, Geopolitics and Life on Earth is one of the most wide-ranging works of intellectual history I've read in a long time. Times Higher Education

This book is an original intellectual history of eugenic thought This work commands respect for its sweep and its range, identifying authoritarian elements in ecology and even some libertarian tendencies in eugenics. Here is the best history we have of the emergence of demographic transition theory American Historical Review

This book offers a novel and incisive analysis that forces us to rethink the political and intellectual histories of birth control, population control, and eugenics. It also promises to energize historical debates about conceptions of "the global." The Journal of The History of Medicine and Allied Science

An exciting, important, and often brilliant study... Due to its important argument... as well as its astonishing breadth, Global Population will undoubtedly and deservedly find a wide audience among historians of demography, ecology, and diplomacy. Environmental History

A detailed and nuanced history of population debates... Impressive. Australian Journal of Politics and History

Global Population, both in its fine-grain reconstruction of lively and still-resonant past debates and in its larger-scale argument about origins and influence, is a notable essay in intellectual history. Geoffrey McNicoll, Bulletin of the History of Medicine

Global Population will surely become a staple in the history of medicine and healthcare. Medical History

Acknowledgments
Introduction: Life and Earth
Part I. The Long Nineteenth Century
1. Confined in Room: A Spatial History of Malthusianism
Part II. The Politics of Earth, 1920s and 1930s
2. War and Peace: Population, Territory, and Living Space
3. Density: Universes with Definite Limits
4. Migration: World Population and the Global Color Line
5. Waste Lands: Sovereignty and the Anticolonial History of World Population
Part III. The Politics of Life, 1920s and 1930s
6. Life on Earth: Ecology and the Cosmopolitics of Population
7. Soil and Food: Agriculture and the Fertility of the Earth
8. Sex: The Geopolitics of Birth Control
9. The Species: Human Difference and Global Eugenics
Part IV. Between One World and Three Worlds, 1940s to 1968
10. Food and Freedom: A New World of Plenty?
11. Life and Death: The Biopolitical Solution to a Geopolitical Problem
12. Universal Rights? Population Control and the Powers of Reproductive Freedom
Conclusion: The Population Bomb in the Space Age
Notes
Archival Collections
Index

Alison Bashford is a historian whose many books connect imperial and world history with medical and environmental histories. She is the Vere Harmsworth Professor of Imperial and Naval History, University of Cambridge, and has taught at Harvard University, the Australian National University, and, for many years, at the University of Sydney. In 2011, she won the Cantemir Prize with Philippa Levine for The Oxford Handbook of the History of Eugenics.