The Entertainment Economy and Cultural Identity 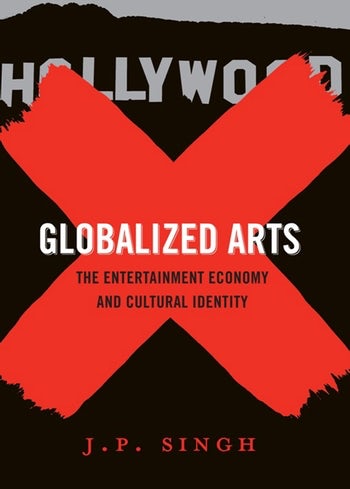 The Entertainment Economy and Cultural Identity

Our interactive world can take a creative product, such as a Hollywood film, Bollywood song, or Latin American telenovela, and transform it into a source of cultural anxiety. What does this artwork say about the artist or the world she works in? How will these artworks evolve in the global market? Film, music, television, and the performing arts enter the same networks of exchange as other industries, and the anxiety they produce informs a fascinating area of study for art, culture, and global politics.

Focusing on the confrontation between global politics and symbolic creative expression, J. P. Singh shows how, by integrating themselves into international markets, entertainment industries give rise to far-reaching cultural anxieties and politics. With examples from Hollywood, Bollywood, French grand opera, Latin American television, West African music, postcolonial literature, and even the Thai sex trade, Singh cites not only the attempt to address cultural discomfort but also the effort to deny entertainment acts as cultural. He connects creative expression to clashes between national identities, and he details the effect of cultural policies, such as institutional patronage and economic incentives, on the making and incorporation of art into the global market. Ultimately, Singh shows how these issues affect the debates on cultural trade being waged by the World Trade Organization, UNESCO, and the developing world.

The book is a detailed and sophisticated analysis of cultural policies and globalization. CHOICE

Singh shows how the confrontation between global politics and symbolic creative expression give rise to far-reaching cultural anxieties and politics. Birmingham Magazine

Singh has thus made an important and exciting contribution capturing the nuanced debates and complexities surrounding symbolic expressions of identity and cultural politics that necessitate policies to accommodate creative expressions in a globalized society. Rekha Datta, International Studies Review

Read an >excerpt from the book. (pdf)