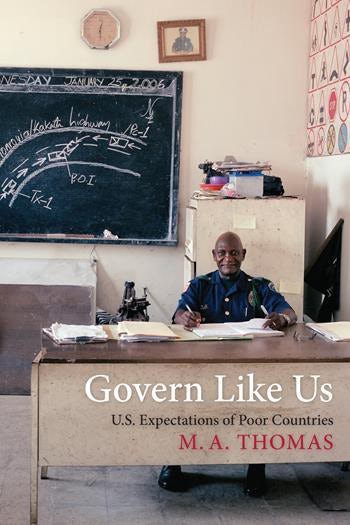 In the poorest countries, such as Afghanistan, Haiti, and Mali, the United States has struggled to work with governments whose corruption and lack of capacity are increasingly seen to be the cause of instability and poverty. The development and security communities call for "good governance" to improve the rule of law, democratic accountability, and the delivery of public goods and services. The United States and other rich liberal democracies insist that this is the only legitimate model of governance. Yet poor governments cannot afford to govern according to these ideals and instead are compelled to rely more heavily on older, cheaper strategies of holding power, such as patronage and repression.

The unwillingness to admit that poor governments do and must govern differently has cost the United States and others inestimable blood and coin. Informed by years of fieldwork and drawing on practitioner work and academic scholarship in politics, economics, law, and history, this book explains the origins of poor governments in the formation of the modern state system and describes the way they govern. It argues that, surprisingly, the effort to stigmatize and criminalize the governance of the poor is both fruitless and destabilizing. The United States must pursue a more effective foreign policy to engage poor governments and acknowledge how they govern.

M. A. Thomas is critical of our policy—rightly so—but refrains from relativism and bombast. She provides a useful contrarian perspective that is difficult to ignore. Michael Johnston, Colgate University

In recent years, there has been a broad recognition in rich countries that poor government is a leading cause of poverty, and they have undertaken vast programs to stem corruption and dysfunctional politics. In Govern Like Us, M. A. Thomas exposes the illusions that have undergirded this effort and shows why the vast sums invested in places like Afghanistan and Iraq have yielded such meager results. This book should be required reading for anyone in the development field. Francis Fukuyama, Stanford University

Wow. A hard-hitting analysis from a scholar/practitioner of the deep intellectual roots of the failures to create 'good governance' everywhere—and why that failure is ignored or blamed on others. A useful corrective to the conventional development wisdom. Lant Pritchett, Harvard University

Govern Like Us delivers a thought-provoking and valuable reminder that sanctimonious insistence on moral perfection can be as self-defeating as moral indifference. Mark Moyar, The Wall Street Journal

Govern Like Us is a valuable guide to outsiders looking to familiarize themselves with some of the challenges of development. It also should be of great value to students, as it provides an excellent outline of the origins and operations of the neopatrimonial state and the challenges to escaping the poverty trap. Christopher Mitchell, Political Science Quarterly

Read an excerpt from the first chapter, "Blind Spot":

M. A. Thomas is a lawyer and political economist who has worked as a governance specialist for foreign aid donors in some of the world's poorest countries. From 2005 until 2014, she was associate professor of international development at The Paul H. Nitze School of Advanced International Studies at The Johns Hopkins University. Her articles have appeared in Foreign Affairs, the American Interest, Policy Review, International Affairs, the Journal of Modern African Studies, the European Journal of Development Research, Development and Change, and the Defense Acquisition Research Journal.