Henry George and the Crisis of Inequality

Progress and Poverty in the Gilded Age 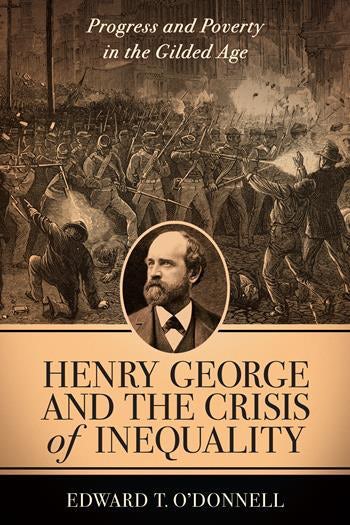 Henry George and the Crisis of Inequality

Progress and Poverty in the Gilded Age

America's remarkable explosion of industrial output and national wealth at the end of the nineteenth century was matched by a troubling rise in poverty and worker unrest. As politicians and intellectuals fought over the causes of this crisis, Henry George (1839–1897) published a radical critique of laissez-faire capitalism and its threat to the nation's republican traditions. Progress and Poverty (1879), which became a surprise best-seller, offered a provocative solution for preserving these traditions while preventing the amassing of wealth in the hands of the few: a single tax on land values. George's writings and years of social activism almost won him the mayor's seat in New York City in 1886. Though he lost the election, his ideas proved instrumental to shaping a popular progressivism that remains essential to tackling inequality today.

Edward T. O'Donnell's exploration of George's life and times merges labor, ethnic, intellectual, and political history to illuminate the early militant labor movement in New York during the Gilded Age. He locates in George's rise to prominence the beginning of a larger effort by American workers to regain control of the workplace and obtain economic security and opportunity. The Gilded Age was the first but by no means the last era in which Americans confronted the mixed outcomes of modern capitalism. George's accessible, forward-thinking ideas on democracy, equality, and freedom have tremendous value for contemporary debates over the future of unions, corporate power, Wall Street recklessness, government regulation, and political polarization.

This social biography of Henry George is a beautifully written, deeply researched, carefully argued, and analytically nuanced book. O'Donnell's own prodigious research, as well as his talent for synthesizing the findings of other scholars, makes this a social and political history of Gilded Age America as seen through the lens of Henry George's extraordinary life. Daniel Czitrom, Mount Holyoke College

We have long needed a modern account of the ideas of Henry George, one set in the context of the vast inequalities of wealth in the Gilded Age, the rise and fall of a powerful labor movement, and George's campaign for mayor of New York City in 1886. Edward O'Donnell has now provided it in a fascinating book that shows how the social realities and conflicts of that era speak to our own unequal times. Eric Foner, Columbia University

At a time when issues of social inequality have moved again to the forefront of political debate, it is good to remind ourselves that, throughout the past two centuries, Americans have passionately contested the severe inequalities that went along with the spectacular economic development of the nation. In the nineteenth century, few voices were as powerful—and had as lasting an impact—as that of Henry George. O'Donnell's political biography is a brilliant introduction to George's life, ideas, and politics, showing that inequality can generate political movements that challenge the rich and powerful. Highly recommended. Sven Beckert, Harvard University

A captivating portrait of the struggle between labor and capital during a formative period in the quest for workers' rights. Kirkus Reviews

A detailed examination of Henry George and his radical critique of the Gilded Age economy.... Recommended. Choice

A fascinating, if perplexing work.... O'Donnell effectively and vividly captures the episodes of George's amazing life. The University Bookman

Acknowledgments
List of Abbreviations
Introduction
Part I: The Making of a Radical, 1839–1879
1. "To Be Something and Somebody in the World"
2. "Poverty Enslaves Men We Boast Are Political Sovereigns": Progress and Poverty and Henry George's Republicanism
Part II: The Emergence of "New Political Forces," 1880–1885
3. "New York Is an Immense City": The Empire City in the Early 1880s
4. "Radically and Essentially the Same": Irish-American Nationalism and American Labor
5. "Labor Built This Republic, Labor Shall Rule It"
Part III: The Great Upheaval, 1886–1887
6. "The Country Is Drifting into Danger"
7. "To Save Ourselves from Ruin"
8. "Your Party Will Go Into Pieces"
Epilogue
Notes
Index

Edward T. O'Donnell is associate professor of history at the College of the Holy Cross in Worcester, Massachusetts. He is the author of 1001 Things Everyone Should Know About Irish American History and Ship Ablaze: The Tragedy of the Steamboat General Slocum, and he is the coauthor of Visions of America: A History of the United States. His work can be found at www.edwardtodonnell.com and www.inthepastlane.com.