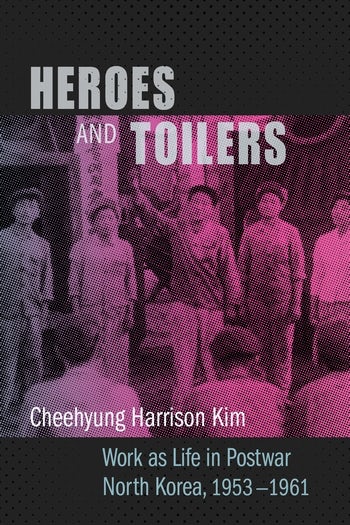 In search of national unity and state control in the decade following the Korean War, North Korea turned to labor. Mandating rapid industrial growth, the government stressed order and consistency in everyday life at both work and home. In Heroes and Toilers, Cheehyung Harrison Kim offers an unprecedented account of life and labor in postwar North Korea that brings together the roles of governance and resistance.

Kim traces the state’s pursuit of progress through industrialism and examines how ordinary people challenged it every step of the way. Even more than coercion or violence, he argues, work was crucial to state control. Industrial labor was both mode of production and mode of governance, characterized by repetitive work, mass mobilization, labor heroes, and the insistence on convergence between living and working. At the same time, workers challenged and reconfigured state power to accommodate their circumstances—coming late to work, switching jobs, fighting with bosses, and profiting from the black market, as well as following approved paths to secure their livelihood, resolve conflict, and find happiness. Heroes and Toilers is a groundbreaking analysis of postwar North Korea that avoids the pitfalls of exoticism and exceptionalism to offer a new answer to the fundamental question of North Korea’s historical development.

North Korea really comes alive in this book as a place inhabited by real human beings with the same problems we all have—a rare achievement in the literature. The author is objective in the best sense—he gives North Korea its due, unlike most authors, but also reserves a serious critique. Heroes and Toilers is by far the best recent book on North Korea and is one of the best books ever written on contemporary Korea. Bruce Cumings, University of Chicago

With poetic fierceness, Kim tackles the knotted relationship between capital, nation, and state during North Korea’s nation-building years. His exhaustive archival research illuminates both the unique and universal aspects of North Korea’s industrial development. Kim’s sensitivity to language and image and his attentiveness to lived experience make for an intimate portrait of work and everyday life as embedded in politics and economics in a time of tremendous transformation. Dafna Zur, Stanford University

A pioneering exploration of post-Korean War industrial work in the DPRK, Heroes and Toilers greatly enriches our understanding of a crucial period and topic in North Korea’s history before the Juche era. Combining robust conceptual formulations with deft source analyses, the author illuminates the variegated ways in which ordinary North Koreans performed labor and pursued individual and collective goals, as reflective and willful humans in tune with the specific opportunities and constraints of their day. This superb book provides ample food for thought in its highly compelling placement of postwar North Korean industrialism and society within the core processes and trends of modern global history. Charles R. Kim, University of Wisconsin-Madison

Cheehyung Harrison Kim is assistant professor of history at the University of Hawaiʻi at Mānoa.