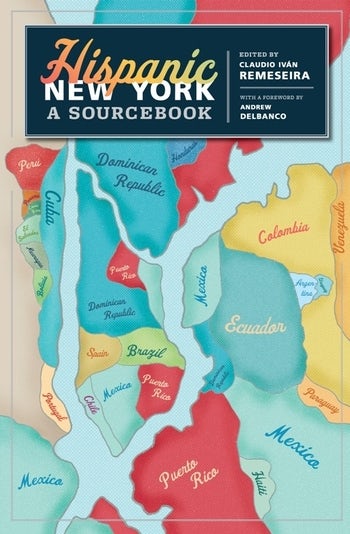 Over the past few decades, a wave of immigration has turned New York into a microcosm of the Americas and enhanced its role as the crossroads of the English- and Spanish-speaking worlds. Yet far from being an alien group within a "mainstream" and supposedly pure "Anglo" America, people referred to as Hispanics or Latinos have been part and parcel of New York since the beginning of the city's history. They represent what Walt Whitman once celebrated as "the Spanish element of our nationality."

Hispanic New York is the first anthology to offer a comprehensive view of this multifaceted heritage. Combining familiar materials with other selections that are either out of print or not easily accessible, Claudio Iván Remeseira makes a compelling case for New York as a paradigm of the country's Latinoization. His anthology mixes primary sources with scholarly and journalistic essays on history, demography, racial and ethnic studies, music, art history, literature, linguistics, and religion, and the authors range from historical figures, such as José Martí, Bernardo Vega, or Whitman himself, to contemporary writers, such as Paul Berman, Ed Morales, Virginia Sánchez Korrol, Roberto Suro, and Ana Celia Zentella. This unique volume treats the reader to both the New York and the American experience, as reflected and transformed by its Hispanic and Latino components.

A rich anthology of the history, ethnicity, language and culture of a city with the largest and most diverse Hispanic population in the country. Sam Roberts, New York Times

...should be required reading for anyone interested in the study of people of Latin American descent in New York. Ramona Hernandez, Latino Studies

Foreword, by Andrew Delbanco
Note on the Selections
Acknowledgments
Introduction: New York City and the Emergence of a New Hemispheric Identity, by Claudio Iván Remeseira
1. People and Communities
Historical Perspectives
The Evolution of the Latino Community in New York: Nineteenth Century to Late Twentieth Century, by Gabriel Haslip-Viera
A Vindication of Cuba
Our America, by José Martí
Memoirs of Bernardo Vega: A Contribution to the History of the Puerto Rican Community in New York (excerpts), by Bernardo Vega
Halfway to Dick and Jane: A Puerto Rican Pilgrimage, by Jack Agüeros
New York: Teetering on the Heights, by Roberto Suro
The Hispanic Impact Upon the United States, by Theodore S. Beardsley Jr.
In Search of Latinas in U.S. History, 1540–1970s, by Virginia Sánchez Korrol
The Spanish Element in Our Nationality, by Walt Whitman
Perspectives on Race, Ethnicity, and Religion
Racial Themes in the Literature: Puerto Ricans and Other Latinos, by Clara E. Rodríguez
The Emergence of Latino Panethnicity, by Milagros Ricourt and Ruby Danta
Creole Religions of the Caribbean, by Margarite Fernández Olmos and Lizabeth Paravisini-Gebert
2. Cultural Hybridizations
Language and Literature: A Bilingual Tradition
New York City: Center and Transit Point of Hispanic Cultural Nomadism, by Dionisio Cañas
Puerto Rican Voices in English, by Carmen Dolores Hernández
Spanish in New York, by Ana Celia Zentella
Spanish in New York: A Moving Landscape, by Antonio Muñoz-Molina
Music and Art: Latino, Latin American, American
New York's Latin Music Landmarks, by Frank M. Figueroa
The Story of Nuyorican Salsa, by Ed Morales
Mariachi Reverie, by Paul Berman
The Art of Babel in the Americas, by Luis Pérez-Oramas
The Life and Passion of Jean-Michel Basquiat, by Frances Negrón-Muntaner
A Splendid Outsider: Archer Milton Huntington and the Hispanic Heritage in the United States, by Claudio Iván Remeseira
Carlos Gardel in New York: The Birth of a Hispanic American Myth, by Claudio Iván Remeseira
Further Reading
Contributors
Index of Names
Index of Subjects

Read an excerpt from the >Introduction.

Claudio Iván Remeseira is an award-winning journalist, writer, and cultural critic. He is founder and director of the Hispanic New York Project, hosted by Columbia University's American Studies Program, where he teaches a seminar on New York's Latino, Latin American, and Iberian cultural heritage.

Andrew Delbanco is professor and director of American studies at Columbia University.