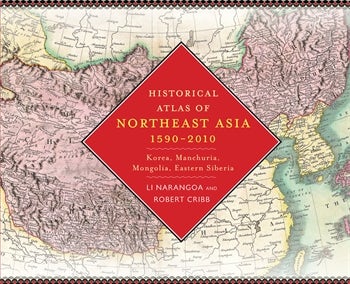 Four hundred years ago, indigenous peoples occupied the vast region that today encompasses Korea, Manchuria, the Mongolian Plateau, and Eastern Siberia. Over time, these populations struggled to maintain autonomy as Russia, China, and Japan sought hegemony over the region. Especially from the turn of the twentieth century onward, indigenous peoples pursued self-determination in a number of ways, and new states, many of them now largely forgotten, rose and fell as great power imperialism, indigenous nationalism, and modern ideologies competed for dominance.

This atlas tracks the political configuration of Northeast Asia in ten-year segments from 1590 to 1890, in five-year segments from 1890 to 1960, and in ten-year segments from 1960 to 2010, delineating the distinct history and importance of the region. The text follows the rise and fall of the Qing dynasty in China, founded by the semi-nomadic Manchus; the Russian colonization of Siberia; the growth of Japanese influence; the movements of peoples, armies, and borders; and political, social, and economic developments—reflecting the turbulence of the land that was once the world's "cradle of conflict." Compiled from detailed research in English, Chinese, Japanese, French, Dutch, German, Mongolian, and Russian sources, the Historical Atlas of Northeast Asia incorporates information made public with the fall of the Soviet Union and includes fifty-five specially drawn maps, as well as twenty historical maps contrasting local and outsider perspectives. Four introductory maps survey the region's diverse topography, climate, vegetation, and ethnicity.

An outstanding milestone in Asian historical geography. Northeast Asia emerges as a dynamic sphere of interaction among local, national, and international forces. This book will be useful for classes in history and geography and essential for the reference shelf of every student of Northeast Asia. Christopher P. Atwood, Indiana University

A unique and extremely welcome contribution to the study of a critical region during its most important centuries. This book relates the major events and plots the most significant sites decade by decade from the end of the sixteenth century into the twenty-first. It opens largely untrafficked parts of Asia to wide readership and promises to become a standard reference for historians, political scientists, and geographers, as well as anyone who appreciates serious cartography. Nancy S. Steinhardt, University of Pennsylvania

The creators of this historical atlas have produced a small treasure, not least in the multilanguage table of place-names, for all those who are interested in the area. It also represents an innovative method to recognize and rescue a region whose story has been obscured by superpowers throughout much of history. Prasenjit Duara, National University of Singapore

This superb atlas greatly enhances our knowledge of the region of Asia comprising north China, Korea, Japan, Russia, Mongolia, and Manchuria. The authors define the region ecologically instead of politically, focusing on the interaction of nomadic conquerors with the expanding empires of Russia and China and the Korean state. They outline boundaries with vivid colors and carefully locate major towns and geographic features, while also providing a concise integrated political narrative for each decade over nearly five hundred years. Such an effective combination of visual and narrative information makes this an essential resource for anyone researching or teaching about this critical region of Asia. Peter C. Perdue, Yale University

This work fills a gaping hole in our knowledge of Russian history as well as all of Northeast Asian history. Helen Hundley, The Russian Review

Thought-provoking and intriguing — especially if you like maps... Essential for anyone interested in the broad sweep of northeast Asian history. Asian Review

Useful. I would recommend this atlas for academic collections. Journal of the Australian and New Zealand Map Society

Marvelous... Its maps are elaborate enough to inspire researchers and still compendious enough to be useful for teaching history and historical geography at the university level. Historical Atlas of Northeast Asia would also serve scholars of Asian studies as an excellent reference book. Journal of Historical Geography

Narangoa and Cribb succeed in providing a panoramic view of the historical configuration of the region and close-ups to historic events by visualizing the region as a whole and breaking down the history into digestible
segments. Clearly written and beautifully produced. Hang Lin, ASIEN: The German Journal on Contemporary Asia

The last 50 years of Northeast Asian history as seen through maps:

Li Narangoa is a historian of Asia at the Australian National University and, with Robert Cribb, is the author of Imperial Japan and National Identities in Asia, 1895–1945.

Robert Cribb is a historian of Asia at the Australian National University and the author of the Historical Atlas of Indonesia.