The Power of Story in Moments of Crisis 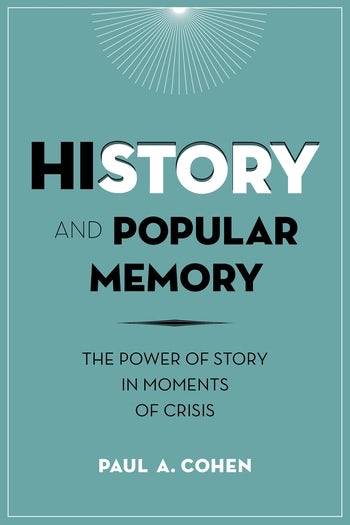 The Power of Story in Moments of Crisis

When people experience a traumatic event, such as war or the threat of annihilation, they often turn to history for stories that promise a positive outcome to their suffering. During World War II, the French took comfort in the story of Joan of Arc and her heroic efforts to rid France of foreign occupation. To bring the Joan narrative more into line with current circumstances, however, popular retellings modified the original story so that what people believed took place in the past was often quite different from what actually occurred.

Paul A. Cohen identifies this interplay between story and history as a worldwide phenomenon, found in countries of radically different cultural, religious, and social character. He focuses here on Serbia, Israel, China, France, the Soviet Union, and Great Britain, all of which experienced severe crises in the twentieth century and, in response, appropriated age-old historical narratives that resonated with what was happening in the present to serve a unifying, restorative purpose.

A central theme in the book is the distinction between popular memory and history. Although vitally important to historians, this distinction is routinely blurred in people's minds, and the historian's truth often cannot compete with the power of a compelling story from the past, even when it has been seriously distorted by myth or political manipulation. Cohen concludes by suggesting that the patterns of interaction he probes, given their near universality, may well be rooted in certain human propensities that transcend cultural difference.

A seminal work of extraordinary scholarship... Informed and informative, History and Popular Memory: The Power of Story in Moments of Crisis is very highly recommended for academic library reference collections. Midwest Book Review

A fascinating cultural and political study of the nature of history and how we remember it, particularly at times of crisis. South China Morning Post

Cohen has done a remarkable job of demonstrating... the merits of analyzing the effects of popular memory. StoryWorlds

Cohen should be lauded for his courage in addressing stories far outside his field... The book is eminently readable and engaging. CHOICE

Readable, humane, thought-provoking and important... This is a beautifully written book which ranges widely and invites the reader to rethink common assumptions about heroism, periodisation and myth. English Historical Review

We can understand [history and memory] better thanks to Cohen's erudite insistence on the importance of storytelling in the way historians and laypersons understand the past. Alon Confino, American Historical Review

List of Illustrations
Preface
Acknowledgments
1. The Battle of Kosovo of 1389 and Serbian Nationalism
2. The Fall of Masada and Modern Jewish Memory
3. Chiang Kai-shek, Chinese Nationalist Policy, and the Story of King Goujian
4. The Enigma of the Appeal of Joan of Arc in Wartime France
5. Artful Propaganda in World War II: Eisenstein's Alexander Nevsky and Olivier's Henry V
Conclusion
Notes
Index

Read the preface to History and Memory:

Paul A. Cohen is Edith Stix Wasserman Professor of Asian Studies and History Emeritus at Wellesley College and a long-time associate of the Fairbank Center for Chinese Studies at Harvard University. His books include Discovering History in China: American Historical Writing on the Recent Chinese Past and the award-winning History in Three Keys: The Boxers as Event, Experience, and Myth.