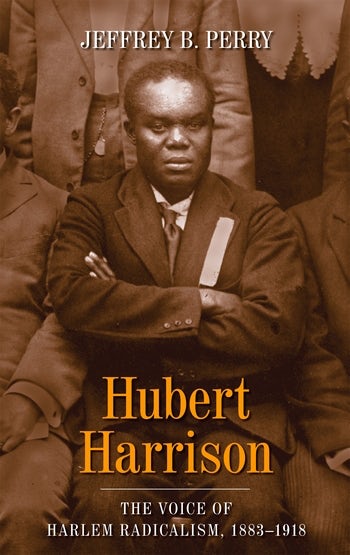 Hubert Harrison was an immensely skilled writer, orator, educator, critic, and political activist who, more than any other political leader of his era, combined class consciousness and anti-white-supremacist race consciousness into a coherent political radicalism. Harrison's ideas profoundly influenced "New Negro" militants, including A. Philip Randolph and Marcus Garvey, and his synthesis of class and race issues is a key unifying link between the two great trends of the Black Liberation Movement: the labor- and civil-rights-based work of Martin Luther King Jr. and the race and nationalist platform associated with Malcolm X.

The foremost Black organizer, agitator, and theoretician of the Socialist Party of New York, Harrison was also the founder of the "New Negro" movement, the editor of Negro World, and the principal radical influence on the Garvey movement. He was a highly praised journalist and critic (reportedly the first regular Black book reviewer), a freethinker and early proponent of birth control, a supporter of Black writers and artists, a leading public intellectual, and a bibliophile who helped transform the 135th Street Public Library into an international center for research in Black culture. His biography offers profound insights on race, class, religion, immigration, war, democracy, and social change in America.

Perry's detailed research brings to life a transformative figure who has been little recognized for his contributions to progressive race and class politics. Booklist

An excellent work and a great contribution to scholarship... Perry must be applauded. Bill Fletcher, Jr., Z Magazine

This critically important book will do for Harrison what David Levering Lewis did for Du Bois... Essential. Choice

This meticulously-researched book fills and enormous gap in the knowledge of black activist intellectuals in the US. Carole Boyce Davies, Working USA

Rich and exhaustively researched. Clarence Lang, Against the Current

Scholars and students... are indeed indebted to Jeffrey Perry for this magisterial study of Hubert Harrison. Larry A. Greene, New Politics

Perry offer(s) new and provocative analyses of African American leadership during the early twentieth century. LaShawn Harris, Journal of the Gilded Age and the Progressive Era

Hubert Harrison is more than a work of scholarship. It is a timely act of generous recognition and restitution of a Black Caribbean scholar who played a significant role in the story of Harlem Radicalism. Black Theology: An International Journal

Perry's biography gives an illuminating account not only of Harrison's strengths and weaknesses but also of the larger historical contraditions informing Black radicalism and Marxism during Harrison's lifetime. Science & Society

Perry's rich biography of Harrison is filled with examples of leadership that would eventually be followed nationwide and result in black political power in Harlem. Sterling Johnson, Journal of American Ethnic History

Jeffrey B. Perry is an independent scholar of the working class formally educated at Princeton, Harvard, Rutgers, and Columbia University. Perry preserved and inventoried the Hubert H. Harrison papers (now at Columbia University's Rare Book and Manuscript Library) and is the editor of A Hubert Harrison Reader. He is also literary executor for Theodore W. Allen and edited and introduced Allen's Class Struggle and the Origin of Racial Slavery: The Invention of the White Race.