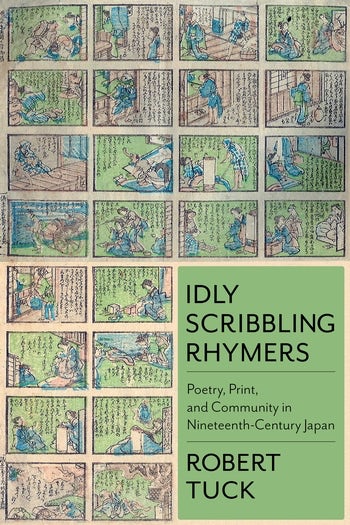 How can literary forms fashion a nation? Though genres such as the novel and newspaper have been credited with shaping a national imagination and a sense of community, during the rapid modernization of the Meiji period, Japanese intellectuals took a striking—but often overlooked—interest in poetry’s ties to national character. In Idly Scribbling Rhymers, Robert Tuck offers a groundbreaking study of the connections among traditional poetic genres, print media, and visions of national community in late nineteenth-century Japan that reveals the fissures within the process of imagining the nation.

Structured around the work of the poet and critic Masaoka Shiki, Idly Scribbling Rhymers considers how poetic genres were read, written, and discussed within the emergent worlds of the newspaper and literary periodical in Meiji Japan. Tuck details attempts to cast each of the three traditional poetic genres of haiku, kanshi, and waka as Japan’s national poetry. He analyzes the nature and boundaries of the concepts of national poetic community that were meant to accompany literary production, showing that Japan’s visions of community were defined by processes of hierarchy and exclusion and deeply divided along lines of social class, gender, and political affiliation. A comprehensive study of nineteenth-century Japanese poetics and print culture, Idly Scribbling Rhymers reveals poetry’s surprising yet fundamental role in emerging forms of media and national consciousness.

Idly Scribbling Rhymers is a welcome contribution to the fields of Meiji literary studies and intellectual history. Through his excellent examples and careful examination of how gender, class, and political affiliation shaped the poetic debates of the nineteenth century, Tuck enhances our understanding of the ways in which media unites and divides,
includes and excludes. Christopher A. Born, Journal of Asian Studies

Were it simply a high-quality study of Masaoka Shiki, Idly Scribbling Rhymers would still reward careful reading, but it is much more: Tuck provides a broad picture of the fate of all traditional poetic forms in the Meiji period. His erudite and insightful attention to kanshi, valuable on its own, also reveals new aspects of haiku and waka, and he breaks fresh ground with his examination of poetry’s role in the emerging medium of the newspaper. David B. Lurie, Columbia University

Against the well-worn narratives of political instrumentalization or aesthetic innovation, Tuck impresses with a powerful alternative literary history of how poets made Japanese modernity: a riveting story about the virulent anxieties over class distinction, political commentary, new media, and gender identity in Japan’s emerging empire. Richly documented, cleverly argued, and boldly inquisitive, Idly Scribbling Rhymers is an exemplary study of how traditional genres morph under the pressures of modernization. Wiebke Denecke, Boston University

This is an important book that is impressive in its scope, thorough in its research, and very timely. Idly Scribbling Rhymers provides us with a fresh view of the Meiji poetic scene that is both richly detailed and broadly based. Tuck takes readers on a deeply rewarding tour of areas that are all but unknown in Anglophone scholarship. Matthew Fraleigh, Brandeis University

Idly Scribbling Rhymers is the first work in English, and one of very few works in Japanese, to attempt to capture the rich social and historical context of poetic composition in the Meiji period. Tuck manages to wrestle an enormous amount of information into a coherent and useful narrative. This book will remain a standard reference work for years to come. J. Keith Vincent, Boston University

The product of meticulous research into a wide variety of materials from both Meiji and Tokugawa Japan, Idly Scribbling Rhymers is also a lively and extremely interesting portrait of exchange among modern intellectuals, some of them significant political figures, who aspired to create new communities and new aesthetics. . . . For graduate students and scholars working in all areas of Japanese literature and cultural history, both premodern and modern, it is essential reading. Satoko Shimazaki, The Journal of Japanese Studies

[Idly Scribbling Rhymers] sets a new standard for original engagement with traditional poetic genres and will be an important resource for anyone interested in the historical development of traditional poetry in Meiji Japan and elsewhere. Wakako Suzuki, Nineteenth-Century Contexts: An Interdisciplinary Journal

Tuck’s book is a valuable contribution to the field of Japanese Studies, and is recommended for readers interested in the relationship between literature and politics, literary discourse and print media, and the legacy of traditional poetry in late nineteenth-century Japan. Matthew Mewhinney, Japanese Studies