How the World Discovered Logic 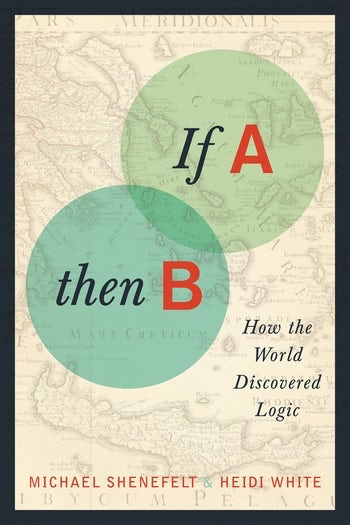 How the World Discovered Logic

While logical principles seem timeless, placeless, and eternal, their discovery is a story of personal accidents, political tragedies, and broad social change. If A, Then B begins with logic's emergence twenty-three centuries ago and tracks its expansion as a discipline ever since. It explores where our sense of logic comes from and what it really is a sense of. It also explains what drove human beings to start studying logic in the first place.

Logic is more than the work of logicians alone. Its discoveries have survived only because logicians have also been able to find a willing audience, and audiences are a consequence of social forces affecting large numbers of people, quite apart from individual will. This study therefore treats politics, economics, technology, and geography as fundamental factors in generating an audience for logic—grounding the discipline's abstract principles in a compelling material narrative. The authors explain the turbulent times of the enigmatic Aristotle, the ancient Stoic Chrysippus, the medieval theologian Peter Abelard, and the modern thinkers René Descartes, David Hume, Jeremy Bentham, George Boole, Augustus De Morgan, John Stuart Mill, Gottlob Frege, Bertrand Russell, and Alan Turing. Examining a variety of mysteries, such as why so many branches of logic (syllogistic, Stoic, inductive, and symbolic) have arisen only in particular places and periods, If A, Then B is the first book to situate the history of logic within the movements of a larger social world.

If A, Then B is the 2013 Gold Medal winner of Foreword Reviews' IndieFab Book of the Year Award for Philosophy.

This is a fascinating story of one of our most abstract yet foundational disciplines. The result is an insightful and wonderfully readable exploration of an essential part of human rationality at work. Highly recommended. Lloyd Carr, Rivier University

Michael Shenefelt and Heidi White's new book is a risky undertaking and, I think, a valuable one. Their aim is to rescue logic from the mathematised corner of the classroom and put it squarely at the heart of philosophy - and indeed life. The risky part is the claim that reasoning, knowledge and rationality are first and foremost matters of logic. Martin Cohen, Times Higher Education

This is a delightful book, both well written and highly informative. Kenneth G. Lucey, Teaching Philosophy

If A, Then B provides a fascinating springboard for discussing how and why logic developed in various cultures.... The book provides a new resource for those interested in studying aspects of the history of mathematics and logic. Calvin Jongsma, MAA Reviews

Preface
Introduction: What Is Logic?
1. The Dawn of Logic
2. Aristotle: Greatest of the Greek Logicians
3. Aristotle's System: The Logic of Classification
4. Chrysippus and the Stoics: A World of Interlocking Structures
5. Logic Versus Antilogic: The Laws of Contradiction and Excluded Middle
6. Logical Fanatics
7. Will the Future Resemble the Past? Inductive Logic and Scientific Method
8. Rhetorical Frauds and Sophistical Ploys: Ten Classic Tricks
9. Symbolic Logic and the Digital Future
10. Faith and the Limits of Logic: The Last Unanswered Question
Appendix: Further Fallacies
Notes
Bibliography
Index

Read an excerpt from the chapter, "What Is Logic?" (to view in full screen, click on icon in bottom right-hand corner)

Winner, 2014 Gold Medal Winner of the Foreword Reviews’ IndieFab Book of the Year Award for Philosophy.

Michael Shenefelt has a doctorate in philosophy from Columbia University and began teaching logic after having worked previously as a newspaper reporter. He is also the author of The Questions of Moral Philosophy.

Heidi White has a doctorate in philosophy from the New School for Social Research and a master's degree in the history of ideas from the University of Texas at Dallas. She teaches philosophy and intellectual history and is a former U.S. Peace Corps Volunteer.