In Search of the Lost Orient 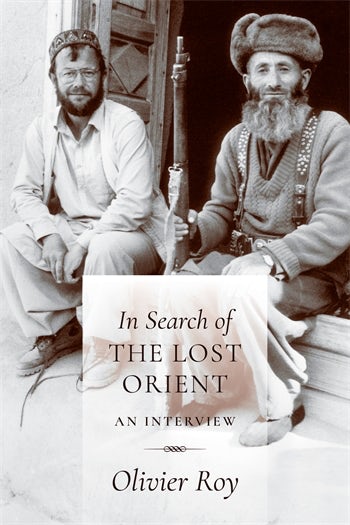 In Search of the Lost Orient

Olivier Roy is one of the world's leading experts on political Islam. But he is not only a scholar—he is also a traveler. Roy's keen and iconoclastic insights emerge from a lifetime of study combined with intrepid exploration through Afghanistan and Central Asia. In this book-length interview, Roy tells the lively and colorful story of his many adventures and discoveries in a variety of social and political settings and how they have come to shape his understanding of the Islamic world and its complex recent history. In Search of the Lost Orient is a candid, personal account of the experiences that led Roy to challenge his youthful ideas of an untouched, romanticized East and build a new intellectual framework to better understand and cohabit with the religions, politics, and cultures of the East, West, North, and South.

In conversation with Jean-Louis Schlegel of the French magazine Esprit, Roy offers insight into the key themes of his career. Roy's immersion in the complexities of many Central Asian territories started him on his critique of the idea of an essentialized Islam. Alongside tales of backpacking from Paris to Kabul, his Afghan decade during the Soviet invasion, and official travel to post-Soviet Central Asia in the 1990s, Roy reflects on the nature of political and humanitarian engagement in this part of the world. He recounts his formative years, education, and developing political commitments and speaks to his evolving place within France's shifting intellectual and religious cultures. This book outlines Roy's lifelong practice—a combination of deliberate research goals and chance encounters—that examines Islam, immigration, and, more broadly, the future of cultures, religions, and secularism in the face of globalization. Both a significant intellectual autobiography and a compelling travelogue through some of the world's pivotal places, In Search of the Lost Orient offers a striking testimony to the many facets of an exceptional thinker.

Olivier Roy is one of the most important analysts of political Islam working today, and arguably the single most insightful voice in a vast field. In Search of the Lost Orient provides a complete intellectual life story and argues that empirical research and a focus on concrete social practices must be the basis by which Islam and its intersection with politics is understood. An engagingly written, impressive book that provides a rare and unique view of political Islam and one of its major thinkers. Benjamin Brower, University of Texas at Austin, author of A Desert Named Peace: The Violence of France's Empire in the Algerian Sahara, 1844-1902

This riveting biographical interview shows Roy first balancing the turbulence of 1960s French student life and hitchhiking, sometimes walking, through Iran, Afghanistan, and Pakistan, learning Persian and seeking the paths less traveled, even as the remote places over time turned into war zones. This account of his growing on-the-ground understanding of his ‘Orient’ and his later dealings with warlords, deciders, intelligence officers, policymakers, and a wide public is an essential and pleasurable must-read. Dale F. Eickelman, Dartmouth College, author of The Middle East and Central Asia: An Anthropological Approach, 4th ed.

Here is the intellectual journey of a distinguished savant in the study of political Islam. Eschewing the ideological attractions of his youth and traveling the world with untiring curiosity, Roy has made exceptional contributions to the study of religion and Islam, not least demarcating the dangers of fundamentalist religion and fundamentalist secularism. This remarkable testimony makes clear that Roy, while unraveling the logic of local societies, also illuminates the transcultural and enduring questions of belonging and liberty. James Piscatori, Australian National University, coauthor of Muslim Politics

A dizzying account of an enviably adventurous life. For an 'intellectual autobiography' it is almost indecently swashbuckling and action-packed. Hurriyet

The narrative of development of Roy’s theories provided by this biographical trajectory indicates that 1) he strongly supports subjective scholarship; and 2) he considers Islam as a religion qua religion, rather than as a culture, ideology, or identity. Both these provocative stances and his meditations on the role of the intellectual make this volume
particularly salient for both established and junior scholars interested in method and in relations between intellectuals
and the state. Jessica Stilwell McGill University, Religious Studies Review

Foreword, by Olivier Mongin and Jean-Louis Schlegel
Part I. Preamble
1. Hitchhiking from Paris to Kabul: A Look Back at a Departure
Part II. From Louis-le-Grand to Dreux Via Afghanistan
2. Louis-le-Grand, the May 1968 Revolution, and Learning Persian
3. Louis-le-Grand, Normale sup’, and the Crisis of the Humanities
4. Oriental Scents: From Yemen to China
5. Return to the Fold
6. Postcards and American Pool
7. Professor at Dreux: Leftist, Away from Paris, and Happy
8. Out of School
Part III. The Afghan Decade
9. Once Again, and for Real, Afghanistan
10. On Foot, on Horseback, and Wearing a Burka in Wartime Afghanistan
11. Blue Helmets and Russian Bombs
12. The Failure of Political Islam
13. War Experience: Prisoners and Bandits
14. Jihad
15. The Afghan Circus
Part IV. The Central Asia Decade
16. A Soviet Invitation to Central Asia
17. A Diplomatic Passport
18. The Expert and the Politician
19. Marriage: The Orient Lost and Found
Part V. Cultures and the Universally Human: Toward Holy Ignorance
20. The Crisis of Cultures and the Universal
21. What Was Good About Orientalism
22. Against the Secularists’ Essentialism
23. The Decade 2000–2010: Where Were You on September 11, 2001?
Part VI. The Importance of a Religious Genealogy
24. Portrait of a Young Protestant in the 1950s and ’60s
25. Can One Think One’s Own Life?
Epilogue: A Story to End All Stories
Notes

Olivier Roy is joint chair of the Robert Schuman Centre for Advanced Studies and the Social and Political Sciences Department at the European University Institute in Florence, where he heads the ReligioWest program. His books include Globalized Islam: The Search for a New Ummah (Columbia, 2004), Secularism Confronts Islam (Columbia, 2007), and Holy Ignorance: When Religion and Culture Part Ways (2010).

C. Jon Delogu is a university professor in the English Department at the Université Jean Moulin, Lyon 3.