In Their Parents' Voices 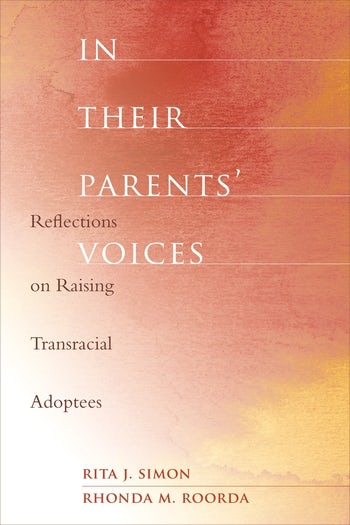 In Their Parents' Voices

Rita J. Simon and Rhonda M. Roorda's In Their Own Voices: Transracial Adoptees Tell Their Stories shared the experiences of twenty-four black and biracial children who had been adopted into white families in the late 1960s and 70s. The book has since become a standard resource for families and practitioners, and now, in this sequel, we hear from the parents of these remarkable families and learn what it was like for them to raise children across racial and cultural lines.

These candid interviews shed light on the issues these parents encountered, what part race played during thirty plus years of parenting, what they learned about themselves, and whether they would recommend transracial adoption to others. Combining trenchant historical and political data with absorbing firsthand accounts, Simon and Roorda once more bring an academic and human dimension to the literature on transracial adoption.

Worthwhile, but the book's true value lies in the chance to meet the parents of the remarkable young adults profiles in its predecessor. Judy Stigger, Adoptive Families

[In Their Parents' Voices] should be part of every placement agency's library and read by every adopting family. Linda Katz, Families in Society

The late Rita J. Simon was a University Professor in the School of Public Affairs and the Washington College of Law at American University in Washington, DC. She published thirty-seven books and edited nineteen and was the editor of Gender Issues.

Rhonda Roorda was adopted into a white family in the Washington, D.C., metropolitan area. She is the recipient of the 2010 Judge John P. Steketee Adoption Hero Award from the Adoptive Family Support Network (MI). In 2017, Rhonda was awarded the Friend of Children and Youth Award from the North American Council on Adoptable Children (NACAC). She is coordinator of financial and support services at a nonprofit educational advocacy organization in Lansing, Michigan. She writes for Fostering Families TODAY and Adoption TODAY magazines.