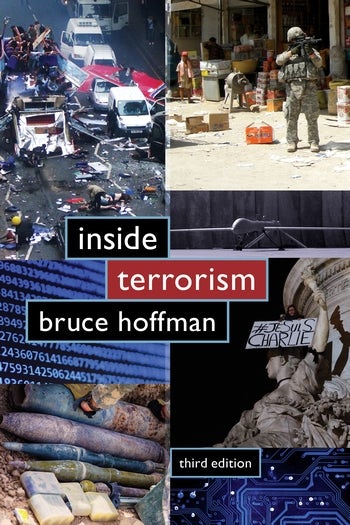 Bruce Hoffman's Inside Terrorism has remained the seminal work for understanding the historical evolution of terrorism and the terrorist mind-set. In this revised third edition of his classic text, Hoffman analyzes the latest developments in global terrorism, offering insight into new adversaries, motivations, strategies, and tactics. He focuses on the rise of ISIS and the resilience of al-Qaeda; terrorist exploitation of the Internet and embrace of social media; radicalization of foreign fighters; and potential future trends, including the repercussions of a post-caliphate ISIS.

Hoffman examines the demographics of contemporary terrorist leaders and recruits; the continued use of suicide bombers; and the likelihood of a chemical, biological, radiological, or nuclear terrorist strike. He also considers the resurgence of violent antigovernment militants, including white supremacists and opponents of abortion. He argues that the war on terrorism did not end with Osama bin Laden's death and that ongoing instability and strife in Syria, Iraq, Afghanistan, Libya, and Yemen, among other places, will both sustain terrorist movements and have broad implications for domestic and international security around the globe.

A vitally important book. Bruce Hoffman has for decades been one of the world's greatest scholars of terrorism, and this new edition of his classic study is impressively wide-ranging and authoritative. Covering key issues such as definition, historical evolution, and internationalization, it also addresses thematic subjects such as religious terrorism and suicide attacks. The book serves as a valuable corrective to the amnesia of so much recent work on terrorism, and it will offer readers powerful insights for many years. Richard English, author of Does Terrorism Work?: A History

Bruce Hoffman has produced a most welcome new and updated edition of his classic work, a book that provides an essential foundation for understanding the rapidly changing contours of terrorism. The third edition of Inside Terrorism is as timely, relevant, and analytically probing as ever. Martha Crenshaw, Stanford University, coauthor of Countering Terrorism: No Simple Solutions

The classic work from the dean of terrorism studies. No one who cares about the struggle of our time should miss this book. Lawrence Wright, author of The Looming Tower: Al-Qaeda and the Road to 9/11 and The Terror Years: From Al-Qaeda to the Islamic State

Preface to the Third Edition
1. Defining Terrorism
2. The End of Empire and the Origins of Contemporary Terrorism
3. The Internationalization of Terrorism
4. Religion and Terrorism
5. Suicide Terrorism
6. The Old Media, Terrorism, and Public Opinion
7. The New Media, Terrorism, and the Shaping of Global Opinion
8. The Modern Terrorist Mind- Set: Tactics, Targets, Tradecraft, and Technologies
Illustrations
9. Terrorism Today and Tomorrow I: Force Multipliers
10. Terrorism Today and Tomorrow II: New and Continuing Challenges
Notes
Bibliography
Index

Bruce Hoffman is a professor at Georgetown University's Walsh School of Foreign Service and director of the Center for Security Studies and the Security Studies Program. He is also a senior fellow at the U.S. Military Academy's Combating Terrorism Center and a visiting professor of terrorism studies at St. Andrews University. Hoffman is the editor of the Columbia University Press series Columbia Studies in Terrorism and Irregular Warfare, coeditor of The Evolution of the Global Terrorist Threat: From 9/11 to Osama bin Laden's Death (Columbia, 2014), and author of Anonymous Soldiers: The Struggle for Israel, 1917–1947 (2015).