A Publisher in Exile, from Pléiade to Pantheon 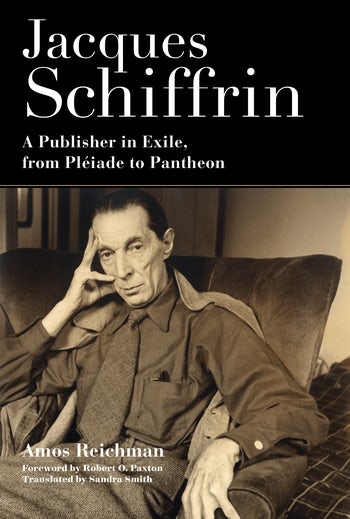 A Publisher in Exile, from Pléiade to Pantheon

Jacques Schiffrin changed the face of publishing in the twentieth century. As the founder of Les Éditions de la Pléiade in Paris and cofounder of Pantheon Books in New York, he helped define a lasting canon of Western literature while also promoting new authors who shaped transatlantic intellectual life. In this first biography of Schiffrin, Amos Reichman tells the poignant story of a remarkable publisher and his dramatic travails across two continents.

Just as he influenced the literary trajectory of the twentieth century, Schiffrin’s life was affected by its tumultuous events. Born in Baku in 1892, he fled after the Bolsheviks came to power, eventually settling in Paris, where he founded the Pléiade, which published elegant and affordable editions of literary classics as well as leading contemporary writers. After Vichy France passed anti-Jewish laws, Schiffrin fled to New York, later establishing Pantheon Books with Kurt Wolff, a German exile. Following Schiffrin’s death in 1950, his son André continued in his father’s footsteps, preserving and continuing a remarkable intellectual and cultural legacy at Pantheon. In addition to recounting Schiffrin’s life and times, Reichman describes his complex friendships with prominent figures including André Gide, Jean-Paul Sartre, Peggy Guggenheim, and Bernard Berenson. From the vantage point of Schiffrin’s extraordinary career, Reichman sheds new light on French and American literary culture, European exiles in the United States, and the transatlantic ties that transformed the world of publishing.

A fitting tribute to a man who did so much for literature—and who could have done even more, had he been allowed. Foreword Reviews

In Jacques Schiffrin: A Publisher in Exile, from Pléiade to Pantheon, Amos Reichman provides a fine account of the events in the turbulent life of a gifted man who sought only to practice his trade in peace and tranquility William Cloonan, Florida State University, H-France Review

Despite fleeing first Tsarist Russia and then Nazi-occupied France, Jacques Schiffrin succeeded in being a major literary influence on two continents, establishing first the best edition of French classics and then a key publishing house in New York which would flourish still more under his son. It is splendid that we now at last have a lively and informative biography of this remarkable man. Adam Hochschild, author of King Leopold's Ghost: A Story of Greed, Terror, and Heroism in Colonial Africa

Jacques Schiffrin, exiled from his native Russia after the Revolution, created a great career as an innovative publisher in Paris but had to start all over again as a refugee in New York in the 1940s, aged almost 50. Bravo to Amos Reichman for writing the first biography of this attractive yet tragic figure, whose life embodies the shocks and displacements caused by the catastrophic history of the twentieth century. Susan Rubin Suleiman, author of The Némirovsky Question: The Life, Death, and Legacy of a Jewish Writer in Twentieth-Century France

Exile is often a state of alienation. Sometimes it can be an adventure, a successful negotiation between old and new worlds. Amos Reichman skillfully recounts one such miracle, providing—through the melancholic, inspired figure of Jacques Schiffrin—a transatlantic microhistory of publishing and literary production from the 1930s through the 1950s that is precise and informed, rich and, at times, funny. Emmanuelle Loyer, Sciences-Po Paris

Reichman's archival work brings a fresh perspective on a major yet little-known publisher and offers a sophisticated overview of the literary and cultural landscape in France before and during the Second World War. Lise Jaillant, Loughborough University

Reichman provides a fine account of the events in the turbulent life of a gifted man. H-France Review

Amos Reichman studied humanities at the École normale supérieure de Lyon and Columbia University. His articles have appeared in Le Monde and Les temps modernes, among other publications.

Sandra Smith is the translator of Irène Némirovsky’s Suite française and Camus’s The Stranger, among others. She has won the French-American Florence Gould Foundation Prize, the PEN Translation Prize, and the National Jewish Book Award.