Japan and the Culture of the Four Seasons

Nature, Literature, and the Arts 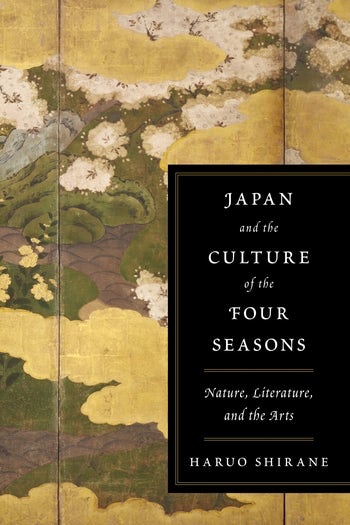 Japan and the Culture of the Four Seasons

Nature, Literature, and the Arts

Elegant representations of nature and the four seasons populate a wide range of Japanese genres and media—from poetry and screen painting to tea ceremonies, flower arrangements, and annual observances. In Japan and the Culture of the Four Seasons, Haruo Shirane shows how, when, and why this practice developed and explicates the richly encoded social, religious, and political meanings of this imagery.

Refuting the belief that this tradition reflects Japan's agrarian origins and supposedly mild climate, Shirane traces the establishment of seasonal topics to the poetry composed by the urban nobility in the eighth century. After becoming highly codified and influencing visual arts in the tenth and eleventh centuries, the seasonal topics and their cultural associations evolved and spread to other genres, eventually settling in the popular culture of the early modern period. Contrasted with the elegant images of nature derived from court poetry was the agrarian view of nature based on rural life. The two landscapes began to intersect in the medieval period, creating a complex, layered web of competing associations. Shirane discusses a wide array of representations of nature and the four seasons in many genres, originating in both the urban and rural perspective: textual (poetry, chronicles, tales), cultivated (gardens, flower arrangement), material (kimonos, screens), performative (noh, festivals), and gastronomic (tea ceremony, food rituals). He reveals how this kind of "secondary nature," which flourished in Japan's urban architecture and gardens, fostered and idealized a sense of harmony with the natural world just at the moment it was disappearing.

Illuminating the deeper meaning behind Japanese aesthetics and artifacts, Shirane clarifies the use of natural images and seasonal topics and the changes in their cultural associations and function across history, genre, and community over more than a millennium. In this fascinating book, the four seasons are revealed to be as much a cultural construction as a reflection of the physical world.

Japan and the Culture of the Four Seasons provides a compelling account of how Japan has appropriated, interpreted, and valued nature over the centuries. Haruo Shirane's wide-ranging study tracks the culture of nature in Japan and especially the central role of waka in constructing a vision of nature that influenced all the arts. In its breadth, depth, and accessibility, his book is of great value not only to scholars and students of Japan but also to anyone interested in the intersections of art and nature. Andrew M. Watsky, Princeton University

A tour de force. Haruo Shirane synthesizes the long and complicated encoding of flora, fauna, toponyms, and annual events of the Japanese landscape and calendar, untangling their synchronic connections and their historical development from the eighth to the nineteenth centuries, from the small cuckoo (hototogisu) as a harbinger of summer in the Kokinshu to the lovemaking of cats as a topic for comic haikai verse in the Edo period. Shirane's book is essential for anyone interested in virtually any genre of the traditional Japanese arts: poetry, costume, painting, noh theater, architecture, tea ceremony, flower arranging—or even Japanese sweets (wagashi)! Joshua Mostow, University of British Columbia

'Sensitivity to nature' is one of those commonplaces about Japanese tradition that, because of its all-too-easy association with cultural nationalism, tends to set many people's teeth on edge. This engaging and impressive study provides a welcome antidote. Drawing from literary, visual, historical, and religious sources, Haruo Shirane cuts through the clichés to uncover multiple, evolving, and sometimes surprising dimensions of the Japanese relationship with nature from early times to the present. Kate Wildman Nakai, professor emerita, Sophia University

As accessible as it is erudite, this volume will appeal to those with interest in any aspect of the arts...Highly recommended. Choice

A vital contribution to our understanding of the literature, art, and daily practices of Japan over the centuries. Elizabeth Oyler, Monumenta Nipponica

Japan and the Culture of the Four Seasons enables us, for the first time in English, to gain a comprehensive, systematic, and authoritatively scholarly view on how very pervasive this seasons culture is and has been since the Nara and Heian periods. Japan Review

Shirane is a reliable guide and reading this book will enrich one's understanding of almost any Japanese artifact. Journal of Japanese Studies

Read an excerpt from the introduction to >Japan and the Culture of the Four Seasons.