The Future of the Free Press in the Surveillance State 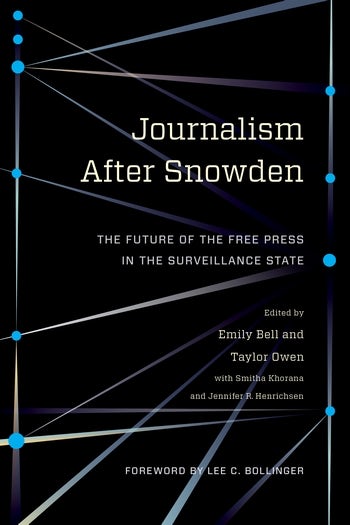 The Future of the Free Press in the Surveillance State

Edward Snowden's release of classified NSA documents exposed the widespread government practice of mass surveillance in a democratic society. The publication of these documents, facilitated by three journalists, as well as efforts to criminalize the act of being a whistleblower or source, signaled a new era in the coverage of national security reporting. The contributors to Journalism After Snowden analyze the implications of the Snowden affair for journalism and the future role of the profession as a watchdog for the public good. Integrating discussions of media, law, surveillance, technology, and national security, the book offers a timely and much-needed assessment of the promises and perils for journalism in the digital age.

Journalism After Snowden is essential reading for citizens, journalists, and academics in search of perspective on the need for and threats to investigative journalism in an age of heightened surveillance. The book features contributions from key players involved in the reporting of leaks of classified information by Edward Snowden, including Alan Rusbridger, former editor-in-chief of The Guardian; ex-New York Times executive editor Jill Abramson; legal scholar and journalist Glenn Greenwald; and Snowden himself. Other contributors include dean of Columbia Graduate School of Journalism Steve Coll, Internet and society scholar Clay Shirky, legal scholar Cass Sunstein, and journalist Julia Angwin. Topics discussed include protecting sources, digital security practices, the legal rights of journalists, access to classified data, interpreting journalistic privilege in the digital age, and understanding the impact of the Internet and telecommunications policy on journalism. The anthology's interdisciplinary nature provides a comprehensive overview and understanding of how society can protect the press and ensure the free flow of information.

Free and irreverent journalism is one of the few defenses that democracy has against corrosive encroachment by the logic of national security under an indefinite state of emergency. This rich collection offers an indispensable overview of the challenges such journalism faces under pervasive electronic surveillance, and some of the technological and organizational strategies that may yet enable us to maintain an independent watchdog function despite these challenges. Yochai Benkler, Berkman Professor of Entrepreneurial Legal Studies, Harvard University Law School

Edward Snowden's whistle-blowing has sparked one of the most contentious debates in recent memory. Making sense of its profound implications, this landmark collection assembles incisive perspectives on the changing nature of the press, communication technologies, and state surveillance - and how these shifts affect our daily lives. Anyone concerned about the future of democracy should read this important book. Victor Pickard, University of Pennsylvania

This is a fascinating and provocative collection of essays that throws into sharp relief the challenge that mass surveillance presents to journalism, to engaged citizenship, and even to democracy. Anyone who wants to understand the significance of the Snowden disclosures should start here. Jameel Jaffer, Founding Director, Knight First Amendment Institute at Columbia University, and former Deputy Legal Director, ACLU

Journalism After Snowden brings together a remarkable group of contributors to reflect on the prospects for investigative reporting and democratic discourse in an age of ubiquitous electronic surveillance. I can think of no better or broader introduction to these critical issues. David Pozen, Professor of Law, Columbia Law School

There is a new normal for journalism in the age of the surveillance state—a new normal hastened, if not created, by the Snowden leaks. This work contributes to those discussions by tapping the ideas of some of the world's top journalists, editors, and scholars. Together, they provide a rich and intellectually diverse set of perspectives on the implications of surveillance for journalism practice and for the role of journalism in democratic society. Jonathan Peters, William Allen White School of Journalism & Mass Communications, the University of Kansas

A provocative compendium of issues confronting journalism as new technologies pose an array of threats to independent reporting. Kirkus Reviews

Foreword, by Lee C. Bollinger
Acknowledgments
Introduction, by Emily Bell, Taylor Owen, and Smitha Khorana
Part I. The Story and the Source
1. Journalism After Snowden, by Alan Rusbridger
2. In Defense of Leaks, by Jill Abramson
3. The Surveillance State, by Glenn Greenwald
4. A Conversation with Edward Snowden, by Edward Snowden and Emily Bell
Part II. Journalists and Sources
5. Source Protection in the Age of Surveillance, by Steve Coll
6. Rescuing a Reporter's Right to Protect the Confidentiality of Sources, by David A. Schulz and Valerie Belair-Gagnon
7. Digital Security for Journalists, by Julia Angwin
8. Beyond PGP: How News Organizations Can and Must Protect Reporters and Sources at an Institutional Level, by Trevor Timm
9. Freedom of Information and Information Asymmetry, by Nabiha Syed
Part III. Governing Surveillance
10. Political Journalism in a Networked Age, by Clay Shirky
11. National Security and the "New Yellow Press", by Steven G. Bradbury
12. A New Age of Cyberwarfare, by David E. Sanger
13. The Snowden Effect on the NSA and Reporting, by Siobhan Gorman
14. Edward Snowden, His Passport, and the Legal Identity of Americans, by Patrick Weil
15. Surveillance Policy as Risk Management, by Cass R. Sunstein
Part IV. Communications Networks and New Media
16. Silicon Valley and Journalism, by Emily Bell
17. Digital Threats Against Journalists, by Ron Deibert
18. Fiber and Open Communications Networks, by Susan Crawford
19. Free Thought, Free Media, by Eben Moglen
20. Should Journalism Be a Surveillance-Safe Space?, by Ethan Zuckerman
Postscript: Journalism After Snowden, by Jonathan Zittrain
Contributors
Index

Emily Bell is professor of professional practice and director of the Tow Center for Digital Journalism at the Columbia Journalism School.

Taylor Owen is assistant professor of digital media and global affairs at the University of British Columbia.

Smitha Khorana is a journalist and fellow at the Tow Center for Digital Journalism at the Columbia Journalism School.

Jennifer R. Henrichsen is a Ph.D. student at the Annenberg School for Communication at the University of Pennsylvania and the former Program & Research Coordinator of Journalism After Snowden at the Tow Center for Digital Journalism.