Protecting the Future of Investigative Reporting 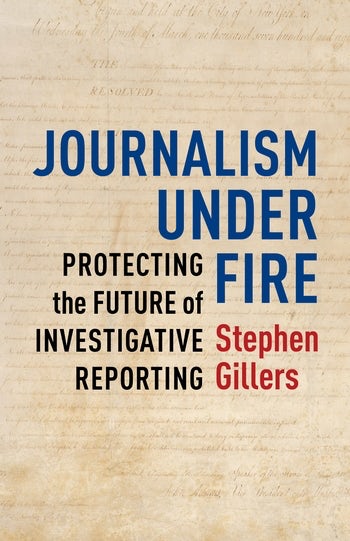 Protecting the Future of Investigative Reporting

A healthy democracy requires vigorous, uncompromising investigative journalism. But today the free press faces a daunting set of challenges: in the face of harsh criticism from powerful politicians and the threat of lawsuits from wealthy individuals, media institutions are confronted by an uncertain financial future and stymied by a judicial philosophy that takes a narrow view of the protections that the Constitution affords reporters. In Journalism Under Fire, Stephen Gillers proposes a bold set of legal and policy changes that can overcome these obstacles to protect and support the work of journalists.

Gillers argues that law and public policy must strengthen the freedom of the press, including protection for news gathering and confidential sources. He analyzes the First Amendment’s Press Clause, drawing on older Supreme Court cases and recent dissenting opinions to argue for greater press freedom than the Supreme Court is today willing to recognize. Beyond the First Amendment, Journalism Under Fire advocates policies that facilitate and support the free press as a public good. Gillers proposes legislation to create a publicly funded National Endowment for Investigative Reporting, modeled on the national endowments for the arts and for the humanities; improvements to the Freedom of Information Act; and a national anti-SLAPP law, a statute to protect media organizations from frivolous lawsuits, to help journalists and the press defend themselves in court. Gillers weaves together questions of journalistic practice, law, and policy into a program that can ensure a future for investigative reporting and its role in our democracy.

Journalism Under Fire issues an extraordinarily timely five-alarm warning. It is a forceful response to those who today—and in the future—would demean and disparage the essential importance of a free press to American democracy. One of America’s leading ethicists and legal scholars, Stephen Gillers also reminds us why supporting and protecting investigative reporting is an essential antidote to corporate and government abuse of power and threats to democratic institutions. This book is for any citizen who wants to better understand what is at stake and who seeks bold ideas for how to keep our democracy and press free and strong in the Trump era—and beyond. Katrina vanden Heuvel, editor and publisher, The Nation

Gillers expertly weaves together legal texts, public policy, and normative theory to shed new light on the Press Clause, which, as the work makes clear, has been largely abandoned by the Supreme Court in recent years. The book develops a persuasive and coherent Press Clause theory and outlines its practical implications. Jonathan Peters, University of Georgia

Using a careful and subtle reading of the Constitution and recent legal examples to buttress its case, this work provides an important, sustained argument about the Press Clause of the First Amendment. A timely, significant book by a leading legal thinker. Tom Goldstein, University of California, Berkeley

Gillers is under no illusions that his program will be adopted anytime soon, but his superb examination of where we are and where we should be headed is immensely valuable, nevertheless. Technical Communication

Gillers’s book is the antidote for those infected with wealth and power that seek to exploit, cover-up or otherwise demean the freedom of the Press to use investigative journalism as a tool for the greater good along with the proper policy, practice, and legal changes that can ensure a future for investigative reporting in a thriving democracy. Adrienne A. Wallace, Grand Valley State University, Journalism & Mass Communicators Educator