Keeping Out the Other 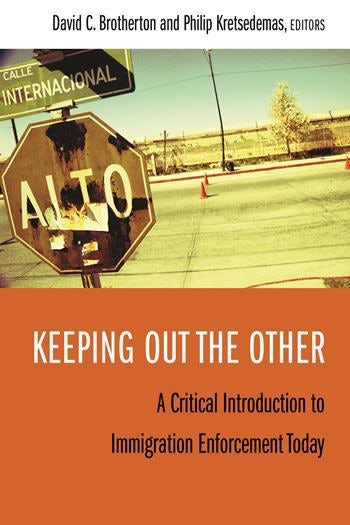 Keeping Out the Other

America's reputation for open immigration has always been accompanied by a desire to remove or discourage the migration of "undesirables." But recent restrictions placed on immigrants, along with an increase in detentions and deportations, point to a more worrying trend. Immigration enforcement has become the fastest growing sector for spending over the past two decades, dwarfing the money spent on helping immigrants adjust to their new lives. Instead of finding effective ways of integrating newcomers into American society, the United States is focusing on making the process of citizenship more difficult, provoking major protests and unrest.

David C. Brotherton and Philip Kretsedemas provide a history and analysis of recent immigration enforcement in the United States, demonstrating that our current anti-immigration tendencies are not a knee-jerk reaction to the events of September 11. Rather, they have been gathering steam for decades. With contributions from social scientists, policy analysts, legal experts, community organizers, and journalists, the volume critically examines the discourse that has framed the question of immigration enforcement for the general public. It also explores the politics and practice of deportation, new forms of immigrant profiling, relevant case law, and antiterrorist operations. Some contributors couch their critiques in an appeal to constitutional law and the defense of civil liberties. Others draw on the theories of structural inequality and institutional discrimination. These diverse perspectives stimulate new ways of thinking about the issue of immigration enforcement, proving that "security" has more to do with improving legal rights, social mobility, and the well-being of all U.S. residents than keeping out the "other."

This timely, valuable book significantly contributes to the field of immigration policy and practice, and political studies... Highly recommended. Choice

With the current immigration debate soon to begin in force once more, it would be advisable for some to read this book in order to better understand the enforcement side of the immigration issue. Abraham David Benavides, Public Administration Review

David C. Brotherton is professor and chair of sociology at John Jay and the Graduate Center, CUNY. His books include Globalizing the Streets: Cross-Cultural Perspectives on Youth, Social Control, and Empowerment and The Almighty Latin King and Queen Nation: Street Politics and the Transformation of a New York City Gang.Philip Kretsedemas is assistant professor of sociology at the University of Massachusetts, Boston. A former communications director and policy analyst for the National Immigration Project of the National Lawyers Guild, he is the co-editor of Immigrants, Welfare Reform, and the Poverty of Policy.