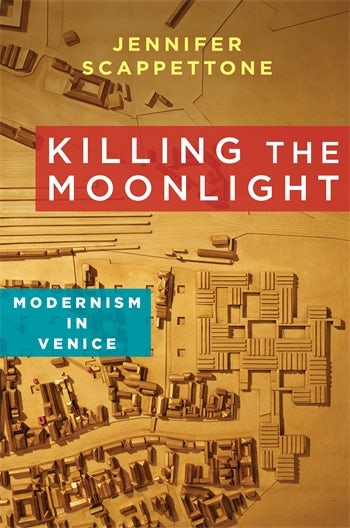 As a city that seems to float between Europe and Asia, removed by a lagoon from the tempos of terra firma, Venice has long seduced the Western imagination. Since the 1797 fall of the Venetian Republic, fantasies about the sinking city have engendered an elaborate series of romantic clichés, provoking conflicting responses: some modern artists and intellectuals embrace the resistance to modernity manifest in Venice's labyrinthine premodern form and temporality, whereas others aspire to modernize by "killing the moonlight" of Venice, in the Futurists' notorious phrase.

Spanning the history of literature, art, and architecture—from John Ruskin, Henry James, and Ezra Pound to Manfredo Tafuri, Italo Calvino, Jeanette Winterson, and Robert Coover—Killing the Moonlight tracks the pressures that modernity has placed on the legacy of romantic Venice, and the distinctive strains of aesthetic invention that resulted from the clash. In Venetian incarnations of modernism, the anachronistic urban fabric and vestigial sentiment that both the nation-state of Italy and the historical avant-garde would cast off become incompletely assimilated parts of the new. Killing the Moonlight brings Venice into the geography of modernity as a living city rather than a metaphor for death, and presents the archipelago as a crucible for those seeking to define and transgress the conceptual limits of modernism. In strategic detours from the capitals of modernity, the book redrafts the confines of modernist culture in both geographical and historical terms.

A theoretically sophisticated project, far-reaching in its comparativist approach, and methodologically rigorous throughout. Scappettone's work brings to our attention—and patiently walks us through, so as to let us appreciate—the interrelation of imaginary and lived spaces, literary and cultural history, textual and urban terrains. Carla Billitteri, University of Maine

Troping its object of study, the field of studies of modern(ist) Venice long seemed exhausted. That is, until the arrival of Jennifer Scappettone's superb Killing the Moonlight. From the Bruce Nauman Venice Fountains with which the book opens to its closing valediction on the Las Vegas Venetian Resort Hotel, Scappettone moves among historical epochs with ease and erudition, making a highly original scholarly contribution of uncommon finesse. Jeffrey T. Schnapp, director, metaLAB, Harvard University

In Killing the Moonlight, a rich and satisfying book, Scappettone offers her own Benjaminian arcades of Venice, replete with seductive phantasmagorias grounded in material culture. Venice attracts modernist impulses negotiating endlessly between the past and modernity exemplified by Henry James, Ezra Pound, John Ashbery, Andrea Zanzotto and even, despite his bluster, by Filippo Tommaso Marinetti. Demonstrating how floating, porous, and transient archipelagos can replace the hardness of virile utopias, Killing the Moonlight will make you revisit the city once again, bathing its canals, palaces, and monuments in a truly new light. Jean-Michel Rabaté, University of Pennsylvania

Killing the Moonlight is a shimmering, brilliant reflection on Venice's making of a modernist aesthetic, one not simply to be understood as a minor modernism, but one arising on the thresholds of the city's lagoons and lacunae. We here meet an amphibious modernism that emerges out of the very materials and structures, out of the waters and stones of the Serenissima herself. In a tour-de-force reading of John Ruskin, Henry James, Ezra Pound, the Italian Futurists, Massimo Cacciari, Italo Calvino, and Jeanette Winterson, Scappettone has written what will be a classic work on the spaces and times of modernity. Suzanne Stewart-Steinberg, Brown University

In Killing the Moonlight, Jennifer Scappettone performs a scholarly quarry of a city fabled in the literary history and cultural memory of Europe. Excavating the social geology of the Venetian site, surveying the layers of archaeological as well as architectural and artistic accumulation, Scappettone's research opens the manifold dimensions of this legacy as a kind of living museum of European dreams. Critically, in a series of focused and revealing readings of its cultural locations, she also demonstrates a long history of such readings: in a process equally self-reflexive and illuminating, she shows how powerfully Venice speaks to the desires of political visionaries and aesthetic revolutionaries alike. Modernist Studies Association Book Prize Citation

In Killing the Moonlight Modernism in Venice, Jennifer Scappettone seems to reproduce in writing the fluid geography of the city at the center of her study. The scholar offers the reader an erudite travelogue that documents, between spatiotemporal detours, returns, and sudden fallings into the present, the instances in which the romantic myth of Venice has clashed and met with modernity. Scappettone demonstrates with a comparative and interdisciplinary approach how Venice is not necessarily a monstrous other of the modern, a space antithetical to contemporary life in which to find a nostalgic refuge or death, but a laboratory used by numerous artists and writers to make the contradictions, the dangers, and the failures themselves of the modernist ethos and utopianism emerge. Gian Maria Annovi, alfabeta 2

Killing the Moonlight is a brilliant fusion of literature, art, architecture, politics, and history that challenges and rewards the reader with its voracious and wide-ranging scope.... This book makes an important contribution not only to modernist studies but also to wider theoretical debates about the relationship between real and imagined places, the temporal dislocation that characterizes sites of historical memory and how they can be reclaimed for the present. Rosa Mucignat, Comparative Literature

Read an excerpt from the introduction, "Venetian Modernity: A Troubled Present"

Jennifer Scappettone is associate professor of English, creative writing, and Romance languages and literatures at the University of Chicago and was the Andrew W. Mellon Postdoctoral Rome Prize Fellow in Modern Italian Studies for 2010–11. She is the translator and editor of Locomotrix: Selected Poetry and Prose of Amelia Rosselli, which was awarded the Academy of American Poets' Raiziss/De Palchi Book Prize. Her own poetry collections include From Dame Quickly and the bilingual Thing Ode/Ode oggettuale.