The Public Mission of the Research University 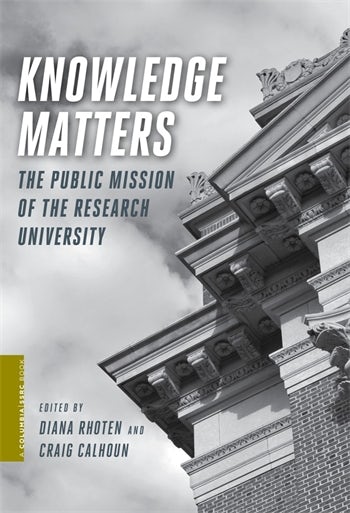 The Public Mission of the Research University

Higher education can be a vital public good, providing opportunities for students, informed citizens for democracy, and knowledge to improve the human condition. Yet public investment in universities is widely being cut, often because public purposes are neglected while private benefits dominate. In this collection, international scholars confront the realities of higher education and the future of its public and private agenda. Their perspectives illuminate the trajectory of education in the twenty-first century and the continuing importance of the university's public mission.

Reporting from Asia, Africa, Europe, Latin America, and North America, these scholars look at the different ways universities struggle to serve public and private agendas. Contributors examine the implications of changes in funding sources as well as amounts, different administrative and policy decisions, and the significance of various approaches to assessment and evaluation. They ask whether wider student access has in fact resulted in social mobility, whether more scientific research can be treated as an open-access resource, how changes in academic publishing change access to knowledge, and whether universities get full value from research sold to private corporations. At the same time, these chapters capture the confusion in the university sector over explaining academic work to a broader public and prioritizing its multiple purposes. Authors examine these practical challenges and the implications of different approaches in different contexts.

An impressive array of international scholars who, individually and collectively, marshal a wide range of evidence around the very large puzzle of university transformation in the early twenty-first century. The transnational breadth of this project is its greatest intellectual strength. Mitchell L. Stevens, Stanford University

An unusually broad analysis of the changing public mission and purpose of the contemporary university. Its comparison of the challenges, responsibilities, and opportunities characterizing public universities around the world is particularly valuable. This book serves as an important scholarly resource and as a thoughtful analysis of key higher education policy issues. James J. Duderstadt, University of Michigan

Knowledge Matters problematizes the concept of the public good and the public university and analyzes multiple challenges faced by universities. Several timely issues, such as the commodification of knowledge, are addressed from different theoretical perspectives and with different research objectives. Many chapters situate ongoing debates regarding the public character of the research university within a framework that emphasizes globalization dynamics, such as the pressure to adapt to transnational university rankings and national quality assurance schemes. Taken as a whole, this book offers theoretically provocative essays and a wealth of empirical material. An engaged and engaging scholarly effort. Francisco O. Ramirez, Stanford University

Contains up-to-the-minute facts and interpretations of the great transformation of public research universities in the era of neoliberalism. Did these institutions sacrifice their public purposes or did they change to serve public purposes more effectively and in new ways? Contributors provide well-informed analyses and fresh perspectives on this important question. Steven Brint, University of California, Riverside

A substantial contribution to our understanding of university purposes across national contexts. The editors draw together some of the best original thinking among the field's most prominent thinkers, offering conceptual foundations certain to inspire much-needed dialogue and further research. Patricia J. Gumport, Stanford University

List of Illustrations
Preface
Diana Rhoten and Craig Calhoun
1. The Public Mission of the Research University, by Craig Calhoun
2. Great Expectations, Past Promises, and Golden Ages: Rethinking the "Crisis" of Public Research Universities, by Gustavo E. Fischman, Sarah E. Igo, and Diana R. Rhoten
3. "El central volumen de la fuerza": Global Hegemony in Higher Education and Research, by Simon Marginson and Imanol Ordorika
4. The State, the University, and Society in Soviet and Russian Higher Education: The Search for a New Public Mission, by Mark S. Johnson and Andrey V. Kortunov
5. Public Research Universities in Latin America and Their Relation to Economic Development, by Juan Carlos Moreno-Brid and Pablo Ruiz-Nápoles
6. When Neoliberalism Colonizes Higher Education in Asia: Bringing the "Public" Back to the Contemporary University, by Ka Ho Mok
7. Challenges for Higher Education in Africa, Ubuntu, and Democratic Justice, by Yusef Waghid
8. The Idea of the Public University and the National Project in Africa: Toward a Full Circle, from the 1960s to the Present, by N'Dri T. Assié-Lumumba and Tukumbi Lumumba-Kasongo
9. Rethinking What Is Made Public in the University's Public Mission, by John Willinsky
10. Public Research Universities: From Land Grant to Federal Grant to Patent Grant Institutions, by Diana Rhoten and Walter Powell
11. German Universities in the New Knowledge Ecology: Current Changes in Research Conditions and University-Industry Relations, by Stefan Lange and Georg Krücken
12. The Micropolitics of Knowledge in England and Europe: The Cambridge University IPRs Controversy and Its Macropolitical Lessons, by Voldemar Tomusk
13. Playing the Quality Game: Whose Quality and Whose Higher Education?, by John Brennan and Mala Singh
14. The Academic Workplace: What We Already Know, What We Still Do Not Know, and What We Would Like to Know, by Christine Musselin
15. Cultural Formations of the Public University: Globalization, Diversity, and the State at the University of Michigan, by Michael D. Kennedy
List of Contributors
Index

Diana Rhoten is the founder and director of the Knowledge Institutions program and the Digital Media and Learning project at the Social Science Research Council. She has published in a range of academic journals and advises cultural, scientific, and educational institutions on issues of organizational design, creative collaboration, and adaptive change.

Craig Calhoun is president of the Social Science Research Council and University Professor of the Social Sciences at New York University. He has served in a variety of academic leadership positions, including as a dean, and has conducted research in many international settings. His most recent book is an edited collection, Robert K. Merton: Sociology of Science and Sociology as Science.