Lady in the Dark

Iris Barry and the Art of Film 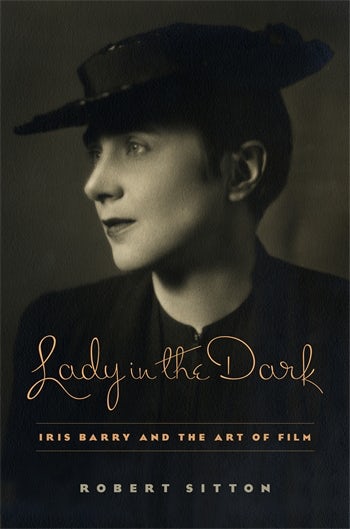 Lady in the Dark

Iris Barry and the Art of Film

Iris Barry (1895–1969) was a pivotal modern figure and one of the first intellectuals to treat film as an art form, appreciating its far-reaching, transformative power. Although she had the bearing of an aristocrat, she was the self-educated daughter of a brass founder and a palm-reader from the Isle of Man. An aspiring poet, Barry attracted the attention of Ezra Pound and joined a demimonde of Bloomsbury figures, including Ford Maddox Ford, T. S. Eliot, Arthur Waley, Edith Sitwell, and William Butler Yeats. She fell in love with Pound's eccentric fellow Vorticist, Wyndham Lewis, and had two children by him.

In London, Barry pursued a career as a novelist, biographer, and critic of motion pictures. In America, she joined the modernist Askew Salon, where she met Alfred Barr, director of the new Museum of Modern Art. There she founded the museum's film department and became its first curator, assuring film's critical legitimacy. She convinced powerful Hollywood figures to submit their work for exhibition, creating a new respect for film and prompting the founding of the International Federation of Film Archives.

Barry continued to augment MoMA's film library until World War II, when she joined the Office of Strategic Services to develop pro-American films with Orson Welles, Walt Disney, John Huston, and Frank Capra. Yet despite her patriotic efforts, Barry's "foreignness" and association with such filmmakers as Luis Buñuel made her the target of an anticommunist witch hunt. She eventually left for France and died in obscurity. Drawing on letters, memorabilia, and other documentary sources, Robert Sitton reconstructs Barry's phenomenal life and work while recasting the political involvement of artistic institutions in the twentieth century.

Sitton's book is chock full of fascinating detail and tells a compelling story about an unusual character, a woman who built institutions and contributed to a way of thinking about film that we take for granted today. The result is a much larger and untold history about art, film, and culture. Haidee Wasson, author of Museum Movies: The Museum of Modern Art and the Birth of Art Cinema

Museum of Modern Art film legend Iris Barry mattered to cinema history, and this book makes her life matter as well. Sitton's sharp biography spans Barry's life from her fascinating times among the literati of post-Victorian Britain to her famed career in the United States, which entailed her virtually founding the influential MoMA Film Library. This is a rich and captivating story. Dana Polan, author of Scenes of Instruction: The Beginnings of the U.S. Study of Film, 1915–1935

Iris Barry was film's first great archivist and a crucial figure in turning a curious novelty into the most significant new art form of its century. She has long deserved a biography as graceful and expert as the one Robert Sitton has delivered so handsomely. It offers a lively portrait of modernist New York when it was fresh and new and is the better for the richness of its quotations from Barry's stirring writings. It cannot be praised too highly. Richard Schickel

I confess that I thought of Iris Barry as an English snob who had rejected many exceptional silents as products of the much-despised Hollywood, but she is so much more interesting—and maddening—than I ever suspected. Her autobiographical fragments are superb, remarkable descriptions of history as it happened—a Zeppelin raid on London in World War 1, the Depression in America making the rich richer. As she describes them, these incidents are as evocative as any film, and the book is beautifully illustrated with excellent-quality portraits. Somebody should film it. Kevin Brownlow, author of The Parade's Gone By.

Robert Sitton's remarkably well researched and evocatively written biography of Iris Barry's hitherto largely unknown position at the forefront of film appreciation is long overdue and most welcome. She led a fascinating private and public life and had an extremely complicated female odyssey in the world of her times, which she profoundly influenced through her writings and cultural actions. That influence still reverberates today. Peter Bogdanovich

The most fascinating characters tend to be the unsung heroes of their field, and there may be no greater example of this than Iris Barry.... This remarkable story is richly detailed... and is required reading for anyone interested in film, art, or museums. Library Journal (starred review)

Meticulously researched, lovingly written.... Lady in the Dark: Iris Barry and the Art of Film is a must-read biography. PopMatters

[A] compelling biography... gracefully written, always interesting, and well researched.... Anyone interested in film history, particularly in the history of film history and film preservation, will want to read this book. Iris Barry is a key figure, and she led a fascinating life. Louise Brooks Society Blog

A terrific new biography.... Sitton brings to light an extraordinary story—or, rather, an extraordinary person, who has been languishing unjustly in the shadows. Richard Brody, The New Yorker

Sitton's elegant, accomplished book is the first to elucidate Barry's important work... This is an indispensable account of a woman who was not only a singular pioneering personality but also a diligent, cunning creator of institutions and ways of seeing that are now taken for granted. CHOICE

A full-fledged biography of the woman who changed the course of American film culture. Leonard Maltin, Indiewire

[A] fascinating biography of the founder of the Museum of Modern Art's Film Library and the individual who helped institutionalize film studies. Thomas Gladysz, The Huffington Post

Sitton, a film historian, has done justice to a fascinating and important subject. Following extensive archival research, he's told a dramatic story and ended with an incisive summary of Barry's character and achievements. Jeffrey Meyers, The New Criterion

Read an excerpt from Lady in the Dark:

Robert Sitton is adjunct professor of media and culture at Marylhurst University in Portland, Oregon. He received his Ph.D. in philosophy from Duke University and worked on the cultural news staff of the New York Times, as director of film education for the Lincoln Center for the Performing Arts, and, in the 1970s, developed the Northwest Film Study Center of the Portland Art Museum, fashioned after Iris Barry's collection at the Museum of Modern Art.