Landscape of the Mind

Human Evolution and the Archaeology of Thought 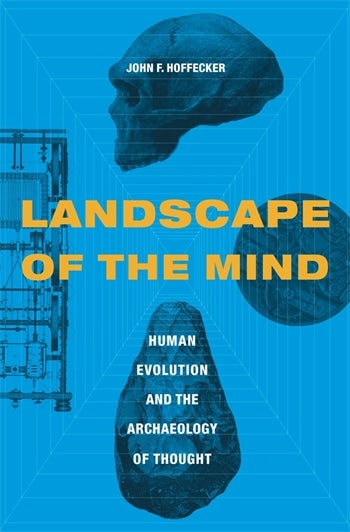 Landscape of the Mind

Human Evolution and the Archaeology of Thought

In Landscape of the Mind, John F. Hoffecker explores the origin and growth of the human mind, drawing on archaeology, history, and the fossil record. He suggests that, as an indirect result of bipedal locomotion, early humans developed a feedback relationship among their hands, brains, and tools that evolved into the capacity to externalize thoughts in the form of shaped stone objects. When anatomically modern humans evolved a parallel capacity to externalize thoughts as symbolic language, individual brains within social groups became integrated into a "neocortical Internet," or super-brain, giving birth to the mind.

Noting that archaeological traces of symbolism coincide with evidence of the ability to generate novel technology, Hoffecker contends that human creativity, as well as higher order consciousness, is a product of the superbrain. He equates the subsequent growth of the mind with human history, which began in Africa more than 50,000 years ago. As anatomically modern humans spread across the globe, adapting to a variety of climates and habitats, they redesigned themselves technologically and created alternative realities through tools, language, and art. Hoffecker connects the rise of civilization to a hierarchical reorganization of the super-brain, triggered by explosive population growth. Subsequent human history reflects to varying degrees the suppression of the mind's creative powers by the rigid hierarchies of nationstates and empires, constraining the further accumulation of knowledge. The modern world emerged after 1200 from the fragments of the Roman Empire, whose collapse had eliminated a central authority that could thwart innovation. Hoffecker concludes with speculation about the possibility of artificial intelligence and the consequences of a mind liberated from its organic antecedents to exist in an independent, nonbiological form.

Overall, this is a much needed addition to the area of cognitive thought, an area of research that will become increasingly important within archaeology and paleoanthropology over the coming decades. Samuel P. Griffiths, PaleoAnthropology

Landscape of the Mind provides an innovative view on the feedback between the biological and social in human evolution. Matthew L. Sisk, Journal of Anthropological Research

The volume would be a very good read for nonspecialists interested in cognitive evolution in general and human evolution in particular. Thomas Wynn, Quarterly Review of Biology

Preface and Acknowledgments
1. Modernity and Infinity
2. Daydreams of the Lower Paleolithic
3. Modern Humans and the Super-Brain
4. The Upper Paleolithic as History
5. Mindscapes of the Postglacial Epoch
6. The Vision Animal
Notes
Bibliography
Index

John F. Hoffecker is a fellow of the Institute of Arctic and Alpine Research at the University of Colorado, Boulder. He is the author of A Prehistory of the North: Human Settlement of the Higher Latitudes and coauthor of Human Ecology of Beringia, which was named a Choice outstanding academic title.