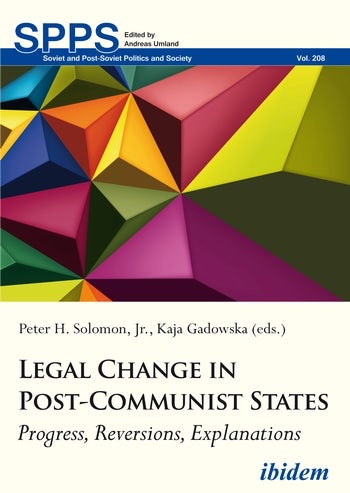 Reformers had high hopes that the end of communism in Eastern Europe and the former Soviet Union would lead to significant improvements in legal institutions and the role of law in public administration. However, the cumulative experience of twenty-five years of legal change since communism has been mixed, marked by achievements and failures, advances and moves backward. This book—written by a team of socio-legal scholars—probes the nuances of this process and starts the process to explain them. It covers developments across the former Soviet Union and Eastern Europe, and it deals with both legal institutions (courts and police) and accountability to law in public aministration, including anticorruption activities. In explaining their findings, the authors probe the impact of such factors as the type of political regime (democratic to authoritarian), international influences (such as the European Union), and culture (legal and political).

A fresh and timely examination of the state of post-communist legal systems by a talented group of experts. Using a variety of creative methodological approaches, the authors trace the evolution of key institutions with an eye to their adaptation to the winds of political change over the past several decades. They are not afraid to tackle big questions, such as the potential for rule of law, independent courts, and accountability among officialdom. Their answers often challenge conventional wisdom. Another major theme is the intransigence of corruption, whose contours vary across the region, as do the efforts to remedy it and their relative success. Kathryn Hendley, Professor of Political Science and Law, University of Wisconsin

Probably the first systematic treatment of the legal transformations in the former communist countries moving to competitive authoritarianism seen from the perspective of the affected countries. Contrary to more superficial political science and journalistic approaches, this is a serious work in the best sociology of law tradition. András Sajó, Professor, Central European University, Budapest; Vice-President (ret.), European Court of Human Rights, Strasbourg

This volume on East European law and legal institutions is a very welcome contribution to the field of socio-legal studies. The former communist states have chosen a variety of pathways towards a liberal democratic order and are now finding that every one of them is littered with diversions and difficulties. The authors offer both country-specific and comparative analyses to explain why the road to democracy has proved to be rocky even in countries that have joined the European Union, as well as in those that have not. They set out the various factors that have supported progress or obstructed it and analyze the tangled interplay between law and politics that has been taking place in each context.

This volume allows the reader to appreciate the legal and political landscape of Eastern Europe. It is a ‘must have’ book for policy makers, for anyone interested in Eastern Europe, and for scholars working on democratic theories, comparative politics, legal cultures, constitutionalism, the rule of law, and legal institutions. Marina Kurkchiyan, Professor, Centre for Socio-Legal Studies, University of Oxford

Once upon a time, ‘postcommunist’ and ‘transition’ were semantically linked. The countries liberated from communist dictatorship were all assumed to be somewhere in transition to democracy, market economy, and the rule of law. Not everyone was optimistic about how far along the path particular countries would get, but that there was an identifiable path and that it had clear milestones and led in clearly identifiable directions was assumed almost without question. Those assumptions are long gone, and this valuable collection gives us many insights into why. Not only are these paths more jagged than we thought, not only can it be as easy to move backwards and forwards along them, but there are other paths—some unimagined, some unattractive—that have internal logics, rationales, constituencies, and resources, that close observation and intelligent reflection can uncover. This book is a trove of such observation and reflection.

Drawing on meticulous research into institutional, cultural, and historical developments in Russia and eastern Central Europe, the articles in this book enrich our understanding of the openness and complexity of possibilities, some much harsher, others surprisingly less so, than originally envisaged. The book is a treasury of often counter-intuitive facts, detailed expert analyses, and closely-informed interpretation. It will inform area specialists, institutional designers, comparative legal, social and political theorists, and anyone with an interest in the largely unpredicted but increasingly unavoidable travails of constitutionalism and democracy—not just in the post-communist world, but in the modern world as a whole. Martin Krygier, Gordon Samuels Professor of Law and Social Theory, University of New South Wales; Honorary Professor, RegNet, Australian National University

Peter H. Solomon, Jr., is professor emeritus of political science, law, and criminology at the University of Toronto and member of its Centre for European, Russian, and Eurasian Studies at the Munk School of Global Affairs, where he teaches on law and politics in Russia. His books include Soviet Criminal Justice under Stalin (Cambridge, 1996), and in Russian as Sovetskaia iustitsiia pri Staline (ROSSPEN, 1998 and 2008), Reforming Justice in Russia, 1864 1996: Power, Culture, and the Limits of Legal Order (editor; Sharpe, 1997), and Courts and Transition in Russia: The Challenge of Judicial Reform (with Todd Foglesong, Westview, 2000). In the new millennium his research has focused on judicial reform in Russia and Ukraine, where he participates in reform projects (e.g. for the World Bank, OSCE, and the Canadian International Development Agency), as well as on criminal law, procedure, and justice in authoritarian and transitional states. His recent publications include: “Law and Courts in Authoritarian States,” in the International Encyclopedia of Social and Behavioral Sciences, 2nd edition (electronic); and ‘Post-Soviet Criminal Justice: The Persistence of Distorted Neo-inquisitorialism,” Theoretical Criminology, 19:2 (2015). He is on the Board of Trustees of the Institute of Law and Public Policy (Moscow) and the editorial boards of the journals Demokratizatsiya, Russian Politics and Law, Statutes and Decisions, and Pravosudie.

Kaja Gadowska is associate professor at the Institute of Sociology, Jagiellonian University, Krakow. She is the author of Political and Economic Clientelism: A Systemic Analysis of Clientelistic Networks in the Restructuring of the Polish Coal Mining Industry After 1989 (WUJ, 2003), which received the First Klemens Szaniawski Prize and the First Stanisław Ossowski Prize for the best PhD dissertation in the Social Sciences and Humanities. Her recent publications include National and International Anti-Corruption Efforts: The Case of Poland, in Fighting Corruption in Eastern Europe, ed. D. Schmidt-Pfister and H. Moroff (Routledge, 2012) and Dysfunctions of the Administration: The Civil Service in the Neo-Institutional Perspective (WUJ, 2015). Her research interests concentrate on dysfunctions of the public sphere, the impact of clientelist networks on the process of political and economic transformation in post-communist countries after 1989, as well as the problem of clientelism and corruption among Poland’s political and economic elites. She is a reviewer for the journals Studia Socjologiczne, Polish Sociological Review, Public Governance, and Ask: Research & Methods quarterly. She is a member of the Board of the Polish Sociological Association.