Representations in Art and Literature of Fin-de-Siècle France 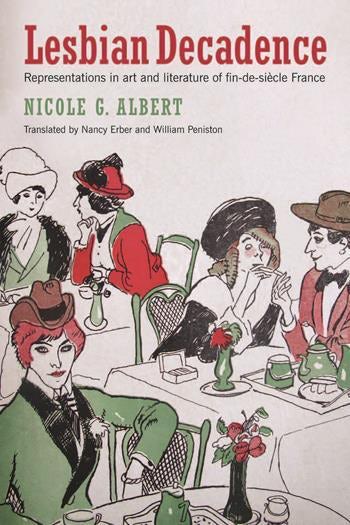 Representations in Art and Literature of Fin-de-Siècle France

In 1857 the French poet Charles Baudelaire, who was fascinated by lesbianism, created a scandal with Les Fleurs du Mal [The Flowers of Evil]. This collection was originally entitled "The Lesbians" and described women as "femmes damnées," with "disordered souls" suffering in a hypocritical world. Then twenty years later, lesbians in Paris dared to flaunt themselves in that extraordinarily creative period at the turn of the 19th and 20th centuries which became known as the Belle Époque.

Lesbian Decadence, now available in English for the first time, provides a new analysis and synthesis of the depiction of lesbianism as a social phenomenon and a symptom of social malaise as well as a fantasy in that most vibrant place and period in history. In this newly translated work, praised by leading critics as "authoritative," "stunning," and "a marvel of elegance and erudition," Nicole G. Albert analyzes and synthesizes an engagingly rich sweep of historical representations of the lesbian mystique in art and literature. Albert contrasts these visions to moralists' abrupt condemnations of "the lesbian vice," as well as the newly emerging psychiatric establishment's medical fury and their obsession on cataloging and classifying symptoms of "inversion" or "perversion" in order to cure these "unbalanced creatures of love."

Lesbian Decadence combines literary, artistic, and historical analysis of sources from the mainstream to the rare, from scholarly studies to popular culture. The English translation provides a core reference/text for those interested in the Decadent movement, in literary history, in French history and social history. It is well suited for courses in gender studies, women's studies, LGBT history, and lesbianism in literature, history, and art.

An authoritative study that reveals how Sapphists were associated with the first expressions of a feminism that threw the popular imagination off balance and produced such inexhaustible fantasies. Marc Emile Baronheld, Elle Belgique

A marvel of elegance and erudition... Natalie Clifford Barney the Amazon, the tortured personalities of Renée Vivien and Lucie Delarue-Mardrus, the character of Claudine so smartly portrayed by Colette, Madame Adonis by Rachilde Albert has brought these forgotten personages back to life with passion. The sterile and flamboyant lesbian with a mysterious and pernicious eroticism ended up embodying the spirit of the fin-de-siècle and by symbolizing to perfection the excesses of Decadence. S. M., Revue Inverses

In Lesbian Decadence, Nicole G. Albert delves deeply into the history of lesbian representation and uses her finely sharpened pen to reveal to us the fascination which the descendants of Sappho exercised [on readers at the turn of the last century] One of the greatest strengths of Albert's book is not to stop at the canonical works but to include hundreds of sources from scholarly philology to popular caricatures. Laure Murat, Magazine Têtu

This book presents a richly detailed portrait of 'the lesbian,' an image foregrounded in the world of arts and letters in the Belle Époque. Fantasies connected to the kinds of 'deadly pleasures' that women enjoyed among themselves, often when they were intoxicated by opium, resulted in an enormous number of books, articles, and illustrations that the author has brought to light for us with stunning erudition. P. K., Le Monde

At last Nicole Albert's landmark study of the place of 'the lesbian' in fin-de-siècle French culture is available in English! Exhaustively researched and newly updated, Albert's book draws on a wide variety of sources from literature, the arts, journalism, and the emerging field of sexology. Albert demonstrates how 'sapphism' was imagined and re-imagined by observers, and how the Belle Époque vogue for lesbianism created a spectral figure both 'demonized and poeticized.' Situated at the intersection of history and literature, Lesbian Decadence should be of interest to everyone interested in a deeper understanding of how culture is shaped by notions of gender and sexuality. Michael Wilson, Associate Dean for Graduate Studies, University of Texas

By far the most authoritative book on how lesbianism, with its many distinct but related aspects, is depicted in decadent discourse of the French Fin de Siècle. The book is itself a jewel of decadent criticism: multi-faceted, studded with insights, and beautifully wrought. Melanie Hawthorne, Professor of French, Department of International Studies, Texas A&M University

Albert's book is a treat for American LGBT Studies researchers. She provides us with a treasure trove of paintings, drawings, and cartoons.... Lesbian Decadence will not only be cited heavily in future nineteenth century LGBT Studies research, but it brings the amazing scholarship of Erber and Peniston to light as well. Best of all, due to its multiple illustrations, it is a fun read for academic non-fiction, and will inspire us in English-speaking countries to learn more about our French cousins. Rachel Wexelbaum, Lambda Literary

Including an excellent bibliography, this book will interest students of fin-de-siecle France, LGBT history, and gender studies. CHOICE

[Lesbian Decadence] brings together an astonishingly wide range of literary, artistic, medico-scientific, and historical sources to catalogue and trace the many ways in which lesbianism was anything but invisible at the fin-de-siècle. Annabel L. Kim, H-France Review

In her landmark study, Albert has reassembled a neglected history. Cassandra Langer, The Gay & Lesbian Review

List of Illustrations
Acknowledgments
Translators’ Note
Prologue
Part I. “At that time, Sappho was reborn in Paris”
1. Sappho: The Resurrection of a Myth
2. The Poets’ Muse
3. Lesbos; or, The Topography of a Vice
Part II. “Her Traits, Her Vices, and Her Sexual Aberrations”
4. The Birth of the Female Invert
5. A Vice or an Illness?
6. A Heroine at the Crossroads of Medicine and Literature
7. When the Third Sex Comes Out
8. Madame Don Juan, Arlequine, and Others
Part III. “Damned Women or Exquisite Creatures? ”
9. Deadly Pleasures
10. The Half-Women
11. Female Narcissus
12. Female Spaces, Male Gaze
Notes
Bibliography
Index

Nicole G. Albert is an independent scholar with a doctoral degree in comparative literature from the Sorbonne. She is the editor of Renée Vivien à rebours: études pour un centenaire [Renée Vivien Against the Grain: Studies for a Centenary] and Renée Vivien, une femme de lettres entre deux siècles [Renée Vivien: A Woman Writer between Two Centuries] as well as the author of La Castiglione: Vies et Métamorphoses [Castiglione: Lives and Metamorphoses].

Nancy Erber is professor emerita of linguistics and modern languages at LaGuardia Community College, City University of New York. An expert in fin-de-siècle literature, she edited, along with George Robb, Disorder in the Court: Trials and Sexual Conflict at the Turn of the Century.

William A. Peniston is the librarian and archivist at the Newark Museum, as well as a French historian with a doctoral degree from the University of Rochester. He is the author of Pederasts and Others: Urban Culture and Sexual Identity in Nineteenth Century Paris.