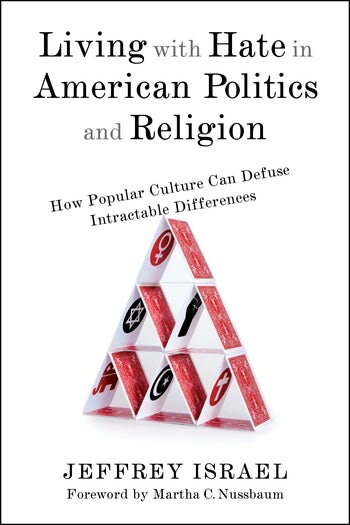 In the United States, people are deeply divided along lines of race, class, political party, gender, sexuality, and religion. Many believe that historical grievances must eventually be left behind in the interest of progress toward a more just and unified society. But too much in American history is unforgivable and cannot be forgotten. How then can we imagine a way to live together that does not expect people to let go of their entrenched resentments?

Living with Hate in American Politics and Religion offers an innovative argument for the power of playfulness in popular culture to make our capacity for coexistence imaginable. Jeffrey Israel explores how people from different backgrounds can pursue justice together, even as they play with their divisive grudges, prejudices, and desires in their cultural lives. Israel calls on us to distinguish between what belongs in a raucous “domain of play” and what belongs in the domain of the political. He builds on the thought of John Rawls and Martha Nussbaum to defend the liberal tradition against challenges posed by Frantz Fanon from the left and Leo Strauss from the right. In provocative readings of Lenny Bruce’s stand-up comedy, Philip Roth’s Portnoy’s Complaint, and Norman Lear’s All in the Family, Israel argues that postwar Jewish American popular culture offers potent and fruitful examples of playing with fraught emotions. Living with Hate in American Politics and Religion is a powerful vision of what it means to live with others without forgiving or forgetting.

How can a more perfect American union be attained given our legacy of historical group injustices and corresponding enduring group antagonisms? In this brilliantly original synthesis of insights from political philosophy, moral psychology, and Jewish American humor, Jeffrey Israel argues that through 'play'—not a facile (and unachievable) national Kumbaya reconciliation, but a reenacting of grudges in a bracketed psychological space backgrounding the political—we can at least come to live with each other in a way that recognizes our common vulnerable humanity. Charles W. Mills, author of Black Rights/White Wrongs: The Critique of Racial Liberalism

In the post-World War II era, Jews, many of them the children of immigrants, moved into a prominent place in the production of the nation's popular culture and sought to make sense of their relationship with the many other kinds of Americans with whom they shared their society. Drawing on a deep and nuanced understanding of this history, Jeffrey Israel makes a compelling case for the importance of play in allowing Americans to live together. Hasia Diner, author of We Remember with Reverence and Love: American Jews and the Myth of Silence after the Holocaust, 1945–1962

Jeffrey Israel has written an amazing book. He wants us to love America in a distinctly political register that ties our individual flourishing to the flourishing of every compatriot. Political love is essential to realizing the promise of justice. But he knows that political love must live alongside historically rooted animosities that deeply divide us. Israel squares this apparent circle with play. In play, we give full-throated voice to our animosities: we engage them, with no thought of transcending them. Seems too good to be true? Start with the beautiful chapter on Lenny Bruce, and then go for a great ride. Joshua Cohen, author of The Arc of the Moral Universe and Other Essays

Reality might fall short of the ideal, but Jeffrey Israel does not. Living with Hate in American Politics and Religion is so wonderfully fluid that it feels as though Israel is reading a scholarly bedtime story. Martin Kavka, author of Jewish Messianism and the History of Philosophy

A brilliant new paradigm...from the pulpit to the seat of government, Israel's model may be the reality of the future American Dream. Essential. Choice

Foreword, by Martha C. Nussbaum
Acknowledgments
Introduction: Loving and Hating America Since the 1990s
1. Jewishness, Race, and Political Emotions
2. The Fact of Fraught Societies I: The Problem of Remainders
3. The Fact of Fraught Societies II: The Problem of Reproduction and the Missing Link Problem
4. The Capability of Play
5. Playing in Fraught Societies
6. Lenny Bruce and the Intimacy of Play
7. Philip Roth Tells the Greatest Jewish Joke Ever Told
8. All in the Family in the Moral History of America
Epilogue: Losing Our “Religion” in the Domain of Play
Notes
Index

Jeffrey Israel is associate professor in the Department of Religion and the Jewish Studies Program at Williams College.

Martha C. Nussbaum is Ernst Freund Distinguished Service Professor of Law and Ethics at the University of Chicago. She is the author of many books, most recently The Monarchy of Fear: A Philosopher Looks at Our Political Crisis (2018), and the winner of the 2018 Berggruen Prize for Philosophy and Culture.