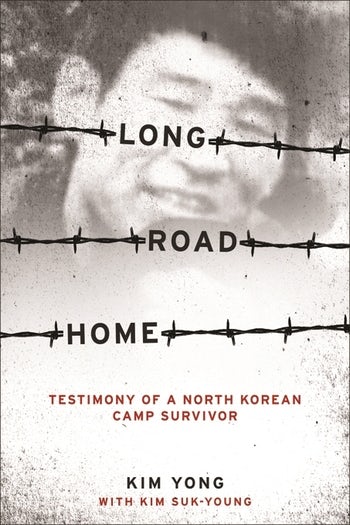 Kim Yong shares his harrowing account of life in a labor campa singularly despairing form of torture carried out by the secret state. Although it is known that gulags exist in North Korea, little information is available about their organization and conduct, for prisoners rarely escape both incarceration and the country alive. Long Road Home shares the remarkable story of one such survivor, a former military official who spent six years in a gulag and experienced firsthand the brutality of an unconscionable regime.

As a lieutenant colonel in the North Korean army, Kim Yong enjoyed unprecedented privilege in a society that closely monitored its citizens. He owned an imported car and drove it freely throughout the country. He also encountered corruption at all levels, whether among party officials or Japanese trade partners, and took note of the illicit benefits that were awarded to some and cruelly denied to others.

When accusations of treason stripped Kim Yong of his position, the loose distinction between those who prosper and those who suffer under Kim Jong-il became painfully clear. Kim Yong was thrown into a world of violence and terror, condemned to camp No. 14 in Hamkyeong province, North Korea's most notorious labor camp. As he worked a constant shift 2,400 feet underground, daylight became Kim's new luxury; as the months wore on, he became intimately acquainted with political prisoners, subhuman camp guards, and an apocalyptic famine that killed millions.

After years of meticulous planning, and with the help of old friends, Kim escaped and came to the United States via China, Mongolia, and South Korea. Presented here for the first time in its entirety, his story not only testifies to the atrocities being committed behind North Korea's wall of silence but also illuminates the daily struggle to maintain dignity and integrity in the face of unbelievable hardship. Like the work of Solzhenitsyn, this rare portrait tells a story of resilience as it reveals the dark forms of oppression, torture, and ideological terror at work in our world today.

[Kim's] dispassionate account of how one man endured the unendurable offers a clue as to how such extreme inhumanity can occur. Donald Richie, Japan Times

A reminder of the brutality of the North Korean regime. John Feffer, Korean Quarterly

Preface
Acknowledgments
Author's Note
Introduction, by Kim Suk-Young
1. Coming of Age
2. Living for the Great Leader
3. Downfall of a Model Citizen
4. In the Mouth of Death
5. Escape
6. Across the Continent
Afterword: Unfinished Story
Notes

Kim Yong was a lieutenant colonel in the North Korean National Security Agency and a career military officer earning foreign currency until he was suddenly sent to a labor camp in 1993. After six years he escaped through China to South Korea and then, in 2003, came to the United States. He now resides in Seoul, Korea.

Kim Suk-Young is a professor at the School of Theater, Film, and Television at the University of California, Los Angeles. She is the author of DMZ Crossing: Performing Emotional Citizenship Along the Korean Border (Columbia, 2014).