How Our Health and Education Systems Failed My Son with Schizophrenia 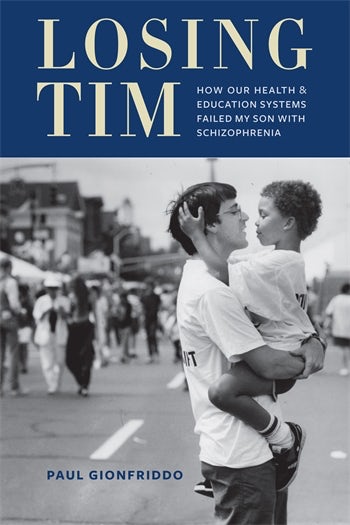 How Our Health and Education Systems Failed My Son with Schizophrenia

In this moving, detailed, clear-eyed exposé, Gionfriddo describes how Tim and others like him come to live on the street. Gionfriddo takes stock of the numerous injustices that kept his son from realizing his potential from the time Tim first began to show symptoms of schizophrenia to the inadequate educational supports he received growing up, his isolation from family and friends, and his frequent encounters with the juvenile justice system and, later, the adult criminal-justice system and its substandard mental health care. Tim entered adulthood with limited formal education, few work skills, and a chronic, debilitating disease that took him from the streets to jails to hospitals and then back to the streets. Losing Tim shows that people with mental illness become homeless as a result not of bad choices but of bad policy. As a former state policy maker, Gionfriddo concludes with recommendations for reforming America's ailing approach to mental health.

A father's description of his family's struggles to raise and support a son with significant psychiatric difficulties, along with his reflections on the failures and gaps in care that his son encounters consistently over the course of his first two decades of life. The story is painful and instructive, and unfortunately not uncommon. Larry Davidson, Yale University

Combining the perspectives of a loving father and a mental health policy expert, Gionfriddo describes the unintended results of a mental health system for children that places responsibility for responding to mental disorders on those afflicted by them. He makes an incontrovertible case for restructuring public policies and child mental health services to build upon the child and family and its strengths and needs as the foundation for continuous, respectful, flexible, and adaptive systems response. Charles Bruner, executive director, Child and Family Policy Center

Losing Tim is a memoir of passion and a call to action. It is a must-read for all policy makers, practitioners, and school personnel. As a parent who is raising a child with mental illness, and as the leader of a national mental health organization created to offer support to families, I would also recommend this book as a resource to families who struggle raising a child with mental illness in a rigid, nonintegrated service system. Paul details the journey through the maze of getting the proper diagnosis and the needed supports and services in a way that must lead to change. Sandra A. Spencer, executive director, National Federation of Families for Children's Mental Health

Gionfriddo has a unique perspective on the concrete functioning of the real mental health 'system' in America that involves schools, justice facilities, housing departments, disability programs, the courts, general health care, and addiction and mental health programs. His unique take is a story of confusion, missed opportunities, and a roller coaster of emotions as the young Tim grows out of his family's orbit to launch his life while trying to find his strategy to accommodate his life goals with schizophrenia. This story is touching, frustrating, and all too common. Hopefully in its retelling, we can find new strategies to really address the needs of families struggling with severe mental illnesses. David Shern, senior science advisor, Mental Health America

The best policy makers are those who focus on how their work affects the people they serve. As a former legislator who became the parent of a son with schizophrenia, Paul Gionfriddo found himself in a position to discover firsthand that even the best-intentioned laws don't always work for those who must rely on them. His book shows how personal struggles have helped him to rethink our nation's approach to mental health policy. Patrick J. Kennedy, founder, the Kennedy Forum, and cofounder, One Mind for Research

A memoir that makes a strong argument: the public policy around mental illness is in shambles.... Gionfriddo's story is powerful, persuasive, and sad. Publishers Weekly

More than a memoir, it's a touchstone for families who believe they are alone in an uphill battle with America's attitude toward—and treatment of—mental health. Carlos Frias, The Palm Beach Post

The author does a phenomenal job in giving a voice to a population that is often marginalized and voiceless. Psychiatric Services

Read the chapter, "Tim Brings a Gun to School":

Paul Gionfriddo was born and raised in Middletown, Connecticut, and graduated from Wesleyan University. He was elected to the Connecticut General Assembly in 1978 and mayor of Middletown in 1989. He has led nonprofits in three states and was on the adjunct faculty at Wesleyan University and Trinity College. In 2014, he was named president and CEO of Mental Health America. He lives in Lake Worth, Florida, with his wife, Pam.