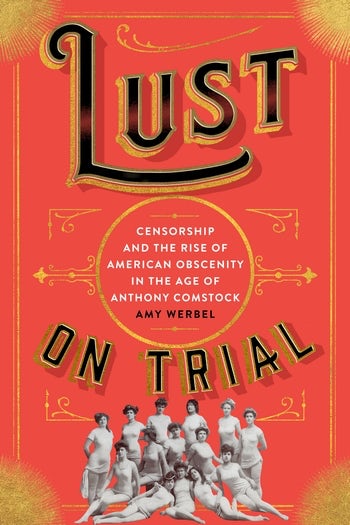 Anthony Comstock was America’s first professional censor. From 1873 to 1915, as Secretary of the New York Society for the Suppression of Vice, Comstock led a crusade against lasciviousness, salaciousness, and obscenity that resulted in the confiscation and incineration of more than three million pictures, postcards, and books he judged to be obscene. But as Amy Werbel shows in this rich cultural and social history, Comstock’s campaign to rid America of vice in fact led to greater acceptance of the materials he deemed objectionable, offering a revealing tale about the unintended consequences of censorship.

In Lust on Trial, Werbel presents a colorful journey through Comstock’s career that doubles as a new history of post–Civil War America’s risqué visual and sexual culture. Born into a puritanical New England community, Anthony Comstock moved to New York in 1868 armed with his Christian faith and a burning desire to rid the city of vice. Werbel describes how Comstock’s raids shaped New York City and American culture through his obsession with the prevention of lust by means of censorship, and how his restrictions provided an impetus for the increased circulation and explicitness of “obscene” materials. By opposing women who preached sexual liberation and empowerment, suppressing contraceptives, and restricting artistic expression, Comstock drew the ire of civil liberties advocates, inspiring more open attitudes toward sexual and creative freedom and more sophisticated legal defenses. Drawing on material culture high and low, including numerous examples of the “obscenities” Comstock seized, Lust on Trial provides fresh insights into Comstock’s actions and motivations, the sexual habits of Americans during his era, and the complicated relationship between law and cultural change.

An incisive history of the futility of censorship ... richly detailed. Kirkus Reviews

Making good use of recent monographic studies of mass media and the history of sexuality, the author, an associate professor of the history of art at the Fashion Institute of Technology, places the architect and chief executor of U.S. anti-obscenity law in a thick social and cultural context. Scott McLemee, Inside Higher Education

A work more relevant now than ever . . . [A] titillating manuscript. Marcela Micucci, The Gotham Center for New York City History

Amy Werbel probably now knows more about Anthony Comstock than anyone alive today. (And oh, how deliciously unpleasant some of that knowledge is!) There’s a sense of discovery that keeps this narrative moving. Susan Jacoby, author of The Age of American Unreason

In this vibrant history, Amy Werbel explores the legal and cultural battles surrounding the censorship of "obscene" materials in late nineteenth and early twentieth century New York. Lust on Trial not only mines the history of censorship and repression in a modernizing America, but also sheds light on its legacy for current debates. Nadine Strossen, author of HATE: Why We Should Resist It with Free Speech, Not Censorship and immediate past president, American Civil Liberties Union (1991–2008)

Amy Werbel's Lust on Trial offers a brilliant analysis of the life and times of Anthony Comstock, the fiercely religious moralist who led the national campaign to rid the United States of sexual expression from 1873 until his death in 1915. As Werbel powerfully demonstrates, Comstock's efforts to persuade the nation that such expression "corrupts the mind . . . and damns the soul" perilously threatened our nation's separation of church and state. This lesson in how religious fanaticism can destroy our freedom is now more important than ever. Geoffrey Stone, University of Chicago

Amy Werbel’s new study turns up other surprises that will make the work of interest to students of art
history as well as readers with an interest in gender and LGBTQ history. American Historical Review

Amy Werbel is associate professor of the history of art at the Fashion Institute of Technology. She is the author of Thomas Eakins: Art, Medicine, and Sexuality in Nineteenth-Century Philadelphia (2007).