Luxuriant Gems of the Spring and Autumn

Attributed to Dong Zhongshu. Edited and Translated by Sarah A. Queen and John S. Major 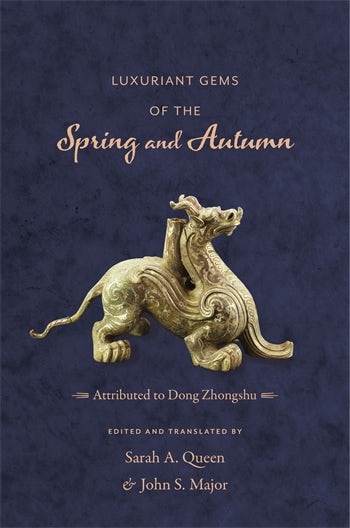 Luxuriant Gems of the Spring and Autumn

Attributed to Dong Zhongshu. Edited and Translated by Sarah A. Queen and John S. Major

The Spring and Autumn (Chunqiu) is a chronicle kept by the dukes of the state of Lu from 722 to 481 B.C.E. Luxuriant Gems of the "Spring and Autumn" (Chunqiu fanlu) follows the interpretations of the Gongyang Commentary, whose transmitters sought to explicate the special language of the Spring and Autumn. The work is often ascribed to the Han scholar and court official Dong Zhongshu, but, as this study reveals, the text is in fact a compendium of writings by a variety of authors spanning several generations. It depicts a utopian vision of a flourishing humanity that they believed to be Confucius's legacy to the world.

The Gongyang masters thought that Confucius had written the Spring and Autumn, employing subtle phrasing to indicate approval or disapproval of important events and personages. Luxuriant Gems therefore augments Confucian ethical and philosophical teachings with chapters on cosmology, statecraft, and other topics drawn from contemporary non-Confucian traditions. A major resource, this book features the first complete English-language translation of Luxuriant Gems, divided into eight thematic sections with introductions that address dating, authorship, authenticity, and the relationship between the Spring and Autumn and the Gongyang approach. Critically illuminating early Chinese philosophy, religion, literature, and politics, this book conveys the brilliance of intellectual life in the Han dynasty during the formative decades of the Chinese imperial state.

This book is a major achievement, one that will open many avenues for research into the mind and method of the most influential cosmological synthesis of ancient China. Victor H. Mair, University of Pennsylvania

With this first complete translation of the famed Chunqiu fanlu, Sarah A. Queen and John S. Major have met a level of sinological scholarship and erudition seldom achieved since it was first set by James Legge's translations in the 1870s. Limpid throughout and with many and varied commentaries on the text and its context, this work is guaranteed to find a place on the bookshelf of every serious student of classical Chinese history and philosophy. Bravo!" Henry Rosemont Jr., Brown University

In this first complete translation of a complex and frequently misunderstood text, expert translator-editors Sarah A. Queen and John S. Major show how the work was brought together by some unknown compiler, long after the death of the reputed author, Dong Zhongshu. The translation is fluent, the scholarship impeccable, and the interpretations convincing: it will not be surpassed for many generations. Robin D. S. Yates, McGill University

Queen and Major offer far more than a reliable, rigorous, and meticulous translation of a major work of ancient Chinese political thought: theirs is a new reading of the notoriously sprawling Chunqiu fanlu together with an exemplary, sophisticated study of the text as a layered, composite work, revealing in detail its multiple ideological agendas and contexts from across the centuries of early imperial intellectual history. An exemplary accomplishment and a wonderful resource for students and scholars alike! Martin Kern, Princeton University

(Luxuriant Gems [alt. Dew] of the Spring and Autumn [Annals]) is a seminal text that further expounds the Chūnqiū through the lens of the Gōngyáng Zhuàn...Here they provide the first complete annotated translation of the Chūnqiū fánlù (following the D. C. Lau edition) with a rich contextualizing discussion, a task coped with masterfully. Lukas Pokorny University of Vienna, Religious Studies Review

Acknowledgments
Introduction
Group 1: Exegetical Principles
1. King Zhuang of Chu
2. Jade Cup
3. Bamboo Grove
4. Jade Brilliance
5. The Quintessential and the Ornamental
6. The Kingly Way
7. Annihilated States, Part A
8. Annihilated States, Part B
9. Waxing and Waning in Accord with the Root
10. The Essentials of Covenants and Meetings
11. The Rectifying Thread
12. Ten Directives
13. Emphasize Governance
14. Images for the Regulation of Dress
15. Two Starting Points
16. Signs and Omens
17. Yu's Postface
Group 2: Monarchical Principles
18. Departing from and Conforming to the Fundamental
19. Establishing the Originating Spirit
20. Preserving Position and Authority
21. Investigating Achievement and Reputation
22. Comprehending the State as the Body
Group 3: Regulatory Principles
23. The Three Dynasties' Alternating Regulations of Simplicity and Refinement
24. Regulations on Officialdom Reflect Heaven
25. Yao and Shun Did Not Presumptuously Transfer [the Throne]; Tang and Wu Did Not Rebelliously Murder [Their Rulers]
26. Regulations on Dress
27. Regulating Limits
28. Ranking States
Group 4: Ethical Principles
29. Standards of Humaneness and Righteousness
30. The Necessity of [Being] Humane and Wise
31. For Nurturing the Self, Nothing Is More Important Than Righteous Principles
32. An Official Response to the King of Jiangdu: The Great Officers of Yue Cannot Be Considered Humane
33. Observing Virtue
34. Serving the Root
35. Deeply Examine Names and Designations
36. Substantiating Human Nature
37. The Lords of the Land
38. An Official Response Regarding the Five Phases
39. [Title and text are no longer extant]
40. [Title and text are no longer extant]
41. Heaven, the Maker of Humankind
42. The Meaning of the Five Phases
Group 5: Yin-Yang Principles
43. Yang Is Lofty, Yin Is Lowly
44. The Kingly Way Penetrates Three
45. Heaven's Prosperity
46. The Heavenly Distinctions Lie in Humans
47. The Positions of Yin and Yang
48. Yin and Yang End and Begin the Year
49. The Meaning of Yin and Yang
50. Yin and Yang Emerge, Withdraw, Ascend, and Descend
51. Heaven's Way Is Not Dualistic
52. Heat or Cold, Which Predominates?
53. Laying the Foundation of Righteousness
54. [Title and text are no longer extant]
55. The Correlates of the Four Seasons
56. Human Correlates of Heaven's Regularities
57. Things of the Same Kind Activate One Another
Group 6: Five-Phase Principles
58. The Mutual Engendering of the Five Phases
59. The Mutual Conquest of the Five Phases
60. Complying with and Deviating from the Five Phases
61. Controlling Water by Means of the Five Phases
62. Controlling Disorders by Means of the Five Phases
63. Aberrations of the Five Phases and Their Remedies
64. The Five Phases and Five Affairs
Group 7: Ritual Principles
65. Sayings Pertaining to the Suburban Sacrifice
66. The Principles of the Suburban Sacrifice
67. Sacrificial Rites of the Suburban Sacrifice
68. The Four [Seasonal] Sacrificial Rites
69. The Suburban Sacrifice
70. Following Orders
71. An Official Response Regarding the Suburban Sacrifice
72. Presenting Gifts to Superiors
73. Hymn to the Mountains and Rivers
74. Seeking Rain
75. Stopping Rain
76. The Principles of Sacrificial Rites
Group 8: Heavenly Principles
77. Conform to Heaven's Way
78. The Conduct of Heaven and Earth (Lau version)
78A. The Conduct of Heaven and Earth (Su Yu version)
79. The Origins of Severity and Beneficence
80. In Imitation of Heaven's Activities (Lau version)
80A. In Imitation of Heaven's Activities (Su Yu version)
81. Heaven, Earth, Yin, and Yang (Lau version)
81A. Heaven, Earth, Yin, and Yang (Su Yu version)
82. The Way of Heaven Bestows (Lau version)
82A. The Way of Heaven Bestows (Su Yu version)
Appendix A. Biographies of the Confucian Scholars
Appendix B. The Biography of Dong Zhongshu
Selected Bibliography
Index

Dong Zhongshu (195–104 B.C.E.) was a native of the kingdom of Guanquan (part of present-day Hebei Province), where at an early age he mastered the Spring and Autumn. A court-appointed scholar of the Gongyang Commentary to the Spring and Autumn, he was known for his interpretations of disasters and anomalies recorded in the text.

Sarah A. Queen is professor of history at Connecticut College. She is the author of From Chronicle to Canon: The Hermeneutics of the "Spring and Autumn" According to Tung Chung-shu; the co-translator, with John S. Major, Andrew Seth Meyer, and Harold D. Roth, of The "Huainanzi": A Guide to the Theory and Practice of Government in Early Han China and The Essential "Huainanzi"; and the coeditor, with Michael Puett, of The "Huainanzi" and Textual Production in Early China.

John S. Major taught East Asian history at Dartmouth College. Now an independent scholar, he is the author of Heaven and Earth in Early Han Thought: Chapters Three, Four, and Five of the "Huainanzi" and the co-translator, with Queen, Meyer, and Roth, of The "Huainanzi" and The Essential "Huainanzi."