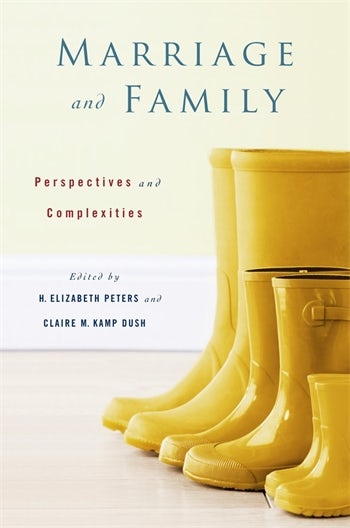 Family life has been radically transformed over the past three decades. Half of all households are unmarried, while only a quarter of all married households have kids. A third of the nation's births are to unwed mothers, and a third of America's married men earn less than their wives. With half of all women cohabitating before they turn thirty and gay and lesbian couples settling down with increasing visibility, there couldn't be a better time for a book that tracks new conceptions of marriage and family as they are being formed.

The editors of this volume explore the motivation to marry and the role of matrimony in a diverse group of men and women. They compare empirical data from several emerging family types (single, co-parent, gay and lesbian, among others) to studies of traditional nuclear families, and they consider the effect of public policy and recent economic developments on the practice of marriage and the stabilizationor destabilizationof family. Approaching this topic from a variety of perspectives, including historical, cross-cultural, gendered, demographic, socio-biological, and social-psychological viewpoints, the editors highlight the complexity of the modern American family and the growing indeterminacy of its boundaries. Refusing to adhere to any one position, the editors provide an unbiased account of contemporary marriage and family.

This book should be in every university library... Essential. Choice

A valuable resource for understanding families and family change a decade into the twenty-first century. Its wide-ranging terrain and scholarly standards make this a book well worth having on the bookshelf. Mick Cunningham, Population Studies

H. Elizabeth Peters is professor of policy analysis and management and director of the population program at Cornell University. Her research focuses on family economics and family policy, examining the effects of public policies such as divorce laws, taxes, and welfare reform on family formation and dissolution decisions, inter- and intra-household transfers, and investments in children. Her research has been widely published in journals of economics, demography, and sociology.

Claire M. Kamp Dush is an assistant professor in the Department of Human Development and Family Science and is a faculty affiliate of the Initiative in Population Research at The Ohio State University. Her current work centers on romantic relationship quality and stability and their impacts on and interactions with human development.