Meeting with My Brother 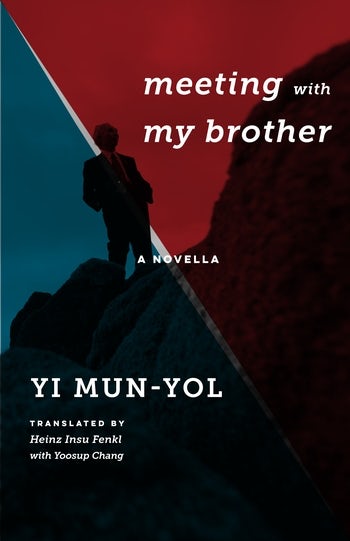 Meeting with My Brother

Yi Mun-yol's Meeting with My Brother is narrated by a middle-aged South Korean professor, also named Yi, whose father abandoned his family and defected to the North at the outbreak of the Korean War. Many years later, despite having spent most of his life under a cloud of suspicion as the son of a traitor, Yi is prepared to reunite with his father. Yet before a rendezvous on the Chinese border can be arranged, his father dies. Yi then learns for the first time that he has a half-brother, whom he chooses to meet instead. As the two confront their shared legacy, their encounter takes a surprising turn.

Meeting with My Brother represents the political and psychological complexity of Koreans on both sides of the border, offering a complex yet poignant perspective on the divisions between the two countries. Through a series of charged conversations, Yi explores the nuances of reunification, both political and personal. This semiautobiographical account draws on Yi's own experience of growing up with an absent father who defected to the North and the stigma of family disloyalty. First published in Korea in 1994, Meeting with My Brother is a moving and illuminating portrait of the relationships sundered by one of the world's starkest barriers.

Yi Mun-yol is one of South Korea's most gifted writers, and this translation gives his simple style all of the elegant force it can bring to bear. This story of two brothers who find each other only after their defector father has died balances the weight of the country's history on their meeting as effortlessly as only a master could achieve. Compelling and essential reading. Alexander Chee, author of the novels The Queen of the Night and Edinburgh

Meeting with My Brother is renowned writer Yi Mun-yol's fictional account of the different politics and desires coalescing along the Chinese side of the North Korean border, where people are both dreading and ardently wishing for national reunification between the two Koreas. The reunion of two brothers in Yi's story is deeply moving. Yi refuses to romanticize blood ties or to take recourse to melodrama. Instead, nuance and sensitivity color this story, which should be read by all those interested in a possible reunification. Janet Poole, translator of Eastern Sentiments by T'aejun Yi

A haunting, powerful story about a divided family and country by one of South Korea's most important writers. Krys Lee, author of the novel How I Became a North Korean

A seminal and timeless work. . . . What ultimately makes Meeting with My Brother so fascinating is Yi’s subtle understanding of estrangement, abandonment, and the attendant feelings of suspicion that so often come up against the powerful call of blood and kinship. In Yi’s fictional encounter, we feel the repressed grief of a nation torn in two, and the daily lives of those who must carry the legacy of such a divorce as they circle each other, wondering and yearning for a chance at intimacy. Min Jin Lee, Times Literary Supplement

Prefaced by an illuminating introduction by professor and translator Heinz Insu Fenkl in which he provides a literary and personal background to Korean author Yi Mun-Yol and Korean literature in general. . . . Meeting with My Brother, at just 90 taut pages, is well worth reading for its own sake. Peter Gordon, Asian Review of Books

Meeting with my Brother is a wonderful novella, somehow managing to summarise the issues behind the nation’s division in less than a hundred pages. . . . Meeting with my Brother, quite apart from its political significance, is simply a beautiful, touching story, and it builds to the two brothers setting their differences aside to remember their father. Tony's Reading List

First published in Korean in 1994, Meeting with My Brother is still as relevant in 2017. Importantly, this book gives you what headlines and political machismo can’t – a sense of what’s at stake for individuals, and why it all matters. Words and Leaves

Introduction
Acknowledgments
Meeting with My Brother

Yi Mun-yol was born in 1948 and is one of the most prominent and socially significant literary figures of post-1980s Korea. He has written more than twenty novels, as well as six volumes of short fiction, and has won every major literary award in South Korea.

Heinz Insu Fenkl is a professor of English and Asian studies at SUNY, New Paltz. He is author of the novel Memories of My Ghost Brother (1996) and translator of Cho Oh-Hyun’s For Nirvana: 108 Zen Sijo Poems (Columbia, 2016).