Memories of Life in Lhasa Under Chinese Rule 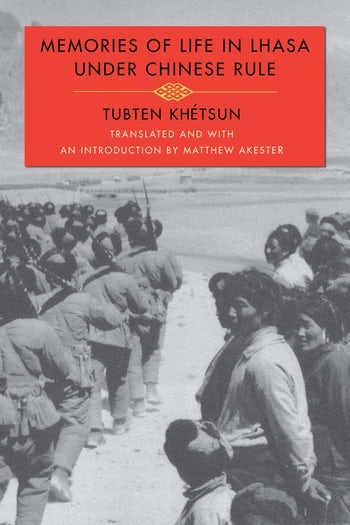 Memories of Life in Lhasa Under Chinese Rule

Born in 1941, Tubten Khétsun is a nephew of the Gyatso Tashi Khendrung, one of the senior government officials taken prisoner after the Tibetan peoples' uprising of March 10, 1959. Khétsun himself was arrested while defending the Dalai Lama's summer palace, and after four years in prisons and labor camps, he spent close to two decades in Lhasa as a requisitioned laborer and "class enemy."

In this eloquent autobiography, Khétsun describes what life was like during those troubled years. His account is one of the most dispassionate, detailed, and readable firsthand descriptions yet published of Tibet under the Communist occupation. Khétsun talks of his prison experiences as well as the state of civil society following his release, and he offers keenly observed accounts of well-known events, such as the launch of the Cultural Revolution, as well as lesser-known aspects of everyday life in occupied Lhasa.

Since Communist China continues to occupy Tibet, the facts of this era remain obscure, and few of those who lived through it have recorded their experiences at length. Khétsun's story will captivate any reader seeking a refreshingly human account of what occurred during the Maoists' shockingly brutal regime.

Demonstrates in full detail the human tragedy of Maoist rule in a land whose tradition it despised and tried to destroy. Kirkus Reviews

This book provides an important piece of the puzzle for those seeking to understand the experience of ordinary Tibetans since 1959. Rick Carew, Far Eastern Economic Review

A powerful indictment of the physical and psychological exploitation of the Tibetan people and natural environment in the service of building a "new" China. Benno Ryan Weiner, The Journal of Asian Studies

Translator's Introduction
Preface
1. The Story of My Family
2. My Childhood
3. The March 10th Uprising
4. The Chinese Fan the Flames of War
5. Imprisoned at the Tibet Military District Headquarters
6. Imprisoned at the Norbu Lingka Barracks
7. At the Nga-chen Power Station Construction Site
8. In Téring Prison
9. In Drapchi Prison
10. The Trong-nying Prison Farm
11. Back Home from Prison
12. The Agitation by the Muslims of Woba-ling
13. The Fall of the Panchen Lama
14. The Misuse of Education
15. The Establishment of the Tibet Autonomous Region
16. The Onset of the Cultural Revolution
17. The June 7th Massacre
18. A Disastrous New Year
19. Old Tsampa in Old Méru
20. The Sino-Soviet War Brings Increased Oppression
21. The "One Smash and Three Antis" Campaign
22. The "Great Massacre"
23. PLA Soldiers Destroy the Fruits of the People's Labor in the Marshes
24. The Systematic Destruction of Ganden Monastery
25. Sent to Kongpo for the Second Time
26. The Xichao Dachang Timber Yard
27. The Tölung Power Station Construction Camp
28. The Lin Biao Affair
29. The Defamation Campaign
30. "Socialist Transformation"
31. The Banak-shöl Production Cooperative
32. The Farmer's Life
33. The Death of Mao Zedong and Subsequent Developments
34. The Rewards of My Hard Work
35. Working in the Potala Palace
36. At the Tibet Academy of Social Science
Epilogue: Leaving Tibet
Index

Matthew Akester is an independent researcher and translator working in the field of Tibetan history.