Memory Is Our Home

Loss and Remembering: Three Generations in Poland and Russia, 1917-1960s 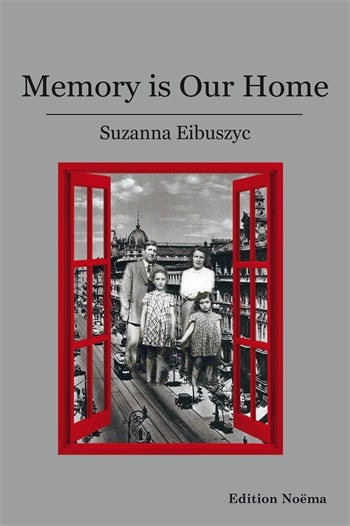 Memory Is Our Home

Loss and Remembering: Three Generations in Poland and Russia, 1917-1960s

Memory Is Our Home is a powerful biographical memoir based on the diaries of Roma Talasiewicz-Eibuszyc, who was born in Warsaw before the end of World War I, grew up during the interwar period and who, after escaping the atrocities of World War II, was able to survive in the vast territories of Soviet Russia and Uzbekistan.

Translated by her own daughter, interweaving her own recollections as her family made a new life in the shadows of the Holocaust in Communist Poland after the war and into the late 1960s, this book is a rich, living document, a riveting account of a vibrant young woman's courage and endurance.

A forty-year recollection of love and loss, of hopes and dreams for a better world, it provides richly-textured accounts of the physical and emotional lives of Jews in Warsaw and of survival during World War II throughout Russia. This book, narrated in a compelling, unique voice through two generations, is the proverbial candle needed to keep memory alive.

Rarely has a book been written that pencils so bleak a portrait of the Poland that had been cloaked in the secrecy of life under Germany's iron fist. Even for those who lived those years in the rest of occupied Europe, it presents an unfamiliar, stark, black-and-white vision of hell. Rudy Rosenberg, author of And Somehow We Survive

This is an essential primary source for scholars and graduate students. Dr. Joanna B. Michlic, Bristol University

A poignant chronicle of one woman's harrowing journey across the decades. Marilyn J. Harran, Chapman University

This memoir, however, is unusual. It is not only the result of a conversation between mother and daughter; it is also constructed in two voices. We learn about the past and the present, or more technically, about intergenerational transmission. Dr. Dennis Klein

Reminds us of a truth the Holocaust sadly confirmed: traumatic total loss creates an absence that can only be retained as memory. Prof. Al Filreis, University of Pennsylvania

For me personally, the memoir was particularly moving — and relevant — since Roma's story was so similar to my father's. Prof. Arlene J. Stein, Rutgers University

A narrative from a generation that successfully escaped the Holocaust but endured its losses for the rest of their lives. Prof. Dalia Ofer

Sweet memories as well as the haunting details of victimization and overcoming enormous obstacles for three generations of Jews in Europe and then the US. Prof. Elaine Leeder, Sonoma State University

Reading a memoir like this tells the story of so many people so that reading it can help heal a lot generations who carry this unbelievable tragedy in their lives. Prof. Shatit Shoshi, Bar Ilan University

A deeply, moving and historically rich account of a Holocaust story common to many survivors but still little known and documented. Prof. Atina Grossmann, author of Jews, Germans, and Allies: Close Encounters in Occupied Germany

A vividly told story of Polish Jews who suffered the oppression of both Hitler and Stalin. Prof. Myrna Goldenberg, Montgomery College

I congratulate Suzanna Eibuszyc for her work to inspire all the new generations to come. Inge Auerbacher, Holocaust survivor, author, and inspirational speaker

This is a haunting and brave book, it will both move and educate readers. Janice Eidus, author of The War of the Rosens and The Last Jewish

It highlights the notions of sacrifice, determination, loyalty and love in various forms. Reads like a Jewish version of Angela's Ashes, by Frank McCourt. Aaron Elster, author of I Still See Her Haunting Eyes

A most compelling and illuminating memoir. In her straightforward style, the author encompasses life in its totality. It is highly recommended. Judy Weissenberg Cohen, editor of Women and the Holocaust

It gives the impression of Roma being the sane center in the middle of millions of ants scurrying about trying to survive in the face of incredible odds. Rudy Rosenberg, author of And Somehow We Survive

Will live in our hearts, reviving the spirit of those who suffered. Rabbi Barbara Aiello

Roma felt strongly that she had to pass on her legacy, and I believe likewise that it is beshert (meant to be) before these memories fade completely from their consciousness. Dr. Dina Ripsman Eylon, Publisher and Editor-in-Chief Women in Judaism: A Multidisciplinary Journal

The memoir resonates deeply in everyone whose life has been touched by events beyond their control. Rita B. Ross, author of Running from Home

History is about what a child feels growing up in the poverty of Post-World War I Poland. It is about what it is like to feel fear the day the Germans invaded Poland in 1939. Dr. John Z. Guzlowski, Eastern Illinois University

My earliest memories are hauntingly painful; they take me back to a day when Mother came home with just a piece of bread. I don't know how old I was, but I can see myself sitting with my brothers and sisters - hungry, cold, and alone in our room, waiting for Mother to return. I sat on the edge of the narrow bed that I shared with Mother and watched the door for hours, just waiting for her. We didn't know where she had gone, but she had been gone all day, and my fear that she was never coming home grew stronger as darkness descended. We were forbidden to light the kerosene lamp when we were alone.

I remember how Mother looked when she opened the door, disheveled and out of breath, as though she had been chased. She paused for a few seconds, walked over to me, and gave me the small piece of bread she clutched to her chest. Turning away from my starving brothers and sisters, I devoured it. Rationally, I know in hindsight that there was no reason to feel guilty; I was too young then to be accountable. But in my heart, I ask myself over and over, "How could I have not shared even a bite?"

We ran inside a little grocery store on Dzikiej Street, but as we ran, I thought I heard someone call out - "Pola, Roma" - but the blasts from the bombs were deafening. I hesitated to see who was calling me but Pola grabbed my arm and pulled me inside the shop. We spent the whole night there waiting for things to quiet down. In the morning, we rushed toward Sala's street. The fire had died out but the building was destroyed. There was no trace of Sala, her two boys, or her husband. We stood there in disbelief. We were frozen to the spot; around us was nothing but devastation. The rubble might very well have been their graves. Pola and I stood there crying, helpless to do anything. Pola was soon able to control herself, but I cried hysterically. Sala was the first one of us to suffer from the German bombardment. Only the day before, a six-story apartment building stood there. Over two hundred people lived in that building. Now Sala and her family were missing. I could not bear to think that they were gone forever. In the devastation and panic that surrounded us we did not know where to go and look for them, the only thing we could do was to make our way to Adek and Anja. In the midst of the nonstop air raids, Warsaw's citizens were barely surviving. I, too, could think of nothing but to stay alive. Fear and terror overtook my rational thinking. When it got quiet, I cried for Sala and her boys.

Sometimes our train was shunted to tracks no longer in use, and we were left there for days at a time. Regular passenger trains or trains carrying soldiers, equipment, or goods would pass through instead. From time to time, the locomotive was unhooked to fill the engine with coal. They would give each car a pail of coal for the stove. Most days, however, we rode in cold railroad cars as our train moved through what seemed like endless snow-covered fields. I was physically and emotionally exhausted from the monotony of the vast, frozen landscape, from the constant state of being cold and hungry, which I convinced myself would never end. My heart was heavy. I was being taken away further and further from those I loved. I could not shake my despair. I knew there was no turning back. We traveled through western Russia, going east for six weeks before finally arriving at our destination. The train stood in what seemed like the middle of nowhere for two days and two nights. It was bitter cold. We were allowed out of the crowded cars only to relieve ourselves. Finally, Russian officials with open trucks came to take us away to the rural community they called Sharyk Podczypnik.

Suzanna Eibuszyc received degrees from the City College of New York where she studied with Elie Wiesel and the University of California. She lives in Los Angeles.