Mencius. Translated by Irene Bloom. Edited and with an introduction by Philip J. Ivanhoe 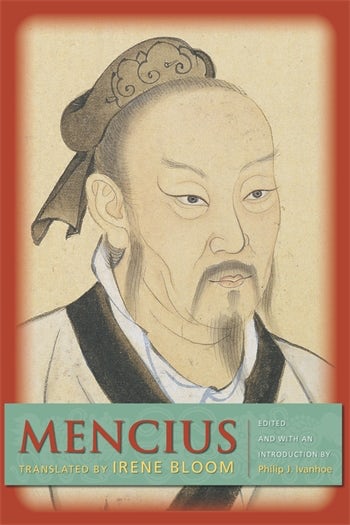 Mencius. Translated by Irene Bloom. Edited and with an introduction by Philip J. Ivanhoe

Known throughout East Asia as Mengzi, or "Master Meng," Mencius (391-308 B.C.E.) was a Chinese philosopher of the late Zhou dynasty, an instrumental figure in the spread of the Confucian tradition, and a brilliant illuminator of its ideas. Mencius was active during the Warring States Period (403-221 B.C.E.), in which competing powers sought to control the declining Zhou empire. Like Confucius, Mencius journeyed to one feudal court after another, searching for a proper lord who could put his teachings into practice. Only a leader who possessed the moral qualities of a true king could unify China, Mencius believed, and in his defense of Zhou rule and Confucian philosophy, he developed an innovative and highly nuanced approach to understanding politics, self-cultivation, and human nature, profoundly influencing the course of Confucian thought and East Asian culture.

Mencius is a record of the philosopher's conversations with warring lords, disciples, and adversaries of the Way, as well as a collection of pronouncements on government, human nature, and a variety of other philosophical and political subjects. Mencius is largely concerned with the motivations of human actors and their capacity for mutual respect. He builds on the Confucian idea of ren, or humaneness, and places it alongside the complementary principle of yi, or rightness, advancing a complex notion of what is right for certain individuals as they perform distinct roles in specific situations. Consequently, Mencius's impact was felt not only in the thought of the intellectual and social elite but also in the value and belief systems of all Chinese people.

Irene Bloom is a sensitive and well-trained scholar. Her translation of Mencius, one of the most influential philosophical works ever written in China, marks an important step forward for Asian and Confucian studies. Harold D. Roth, professor of religious and East Asian studies and director, Contemplative Studies Initiative, Brown University

Irene Bloom's book is an exemplification of the best Sinological scholarship. Its interpretive brilliance will be a source of inspiration for years to come. Tu Weiming, Distinguished Professor of Philosophy, Peking University, and senior research fellow, Harvard University

While Mencius may be generally more 'accessible' when compared with other classical Chinese texts, as P. J. Ivanhoe observes, it is still a challenge to capture in translation the flavor of its fine prose and the force of its arguments. This, I think, is precisely what Bloom sets out to do, and we are richly rewarded for her effort. Her translation is eminently reliable and has a graceful directness and simplicity. Ivanhoe's introduction helpfully highlights key ethical, political, and religious views and relates them to relevant contemporary philosophical debates. This book will be widely used and consulted by scholars. Alan K. L. Chan, National University of Singapore

Accurate and very fluid; in addition to their other strengths, Bloom and Ivanhoe are both gifted writers of English Journal of Chinese Studies

Irene Bloom (1939-2010) was professor emerita of Asian and Middle Eastern cultures at Columbia University and Barnard College. She edited and translated Knowledge Painfully Acquired: The K'un-chih chi of Lo Ch'in-shun and coedited, with Joshua A. Fogel, Meeting of Minds: Intellectual and Religious Interaction in East Asian Traditions of Thought.

Philip J. Ivanhoe specializes in the history of East Asian philosophy and religion and its potential for contemporary ethics. He has written, edited, and coedited more than a dozen books, including Readings from the Lu-Wang School of Neo-Confucianism and Confucian Moral Self-Cultivation.